Aha! Another overclocking competition, and in contrary to the previous EU competition, Belgium was present again! It has to be said, though, this wasn't an ordinary overclocking competition as it was actually held for the so-called power users rather than extreme overclockers. The difference between both remains, even after the event, unknown to me, but it seems that LN2-experience makes you extreme whereas being stuck with air cooling, but still attempt the occasional overclock makes you a power user. Lucky for me, Massman the extreme overclocker, I had Leeghoofd on my side who is a true power user. At least ... he was until a couple of weeks before the event. 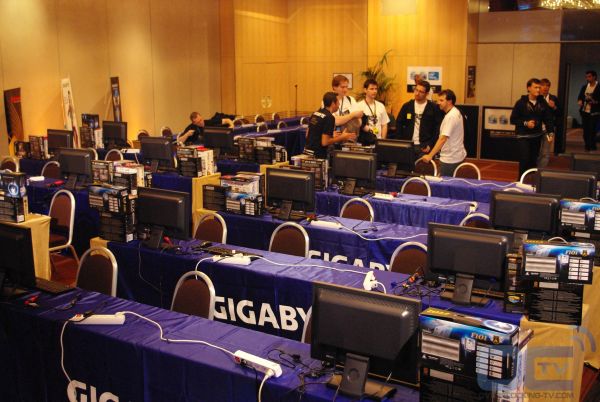 The room where it all took place, we are making deals for the best CPU and GPU with Ruy from Gigabyte UK

So, two questions can be posed. Why was this event held? And why host an overclocking competition without LN2? The answer to the first question is a very simple one: to promote the new P55-series of motherboards.

Before the actual kickoff of the overclocking competition, there was a presentation and short Q/A-session about the new features of the Gigabyte P55 motherboards. Most of the questions have a pretty straight-forward answer and the information can be found in our first P55 motherboard round-up, in which we tested two Gigabyte motherboards, but there's one that caught my attention.

In short, one person asked Gigabyte about adopting the multi-GPU solution of Lucid, named Hydra. As you all know, the Lucid Hydra is a PCIe solution that allows video cards from different manufacturers to co-operate in rendering the same image or, in normal English, allows you to use both NVIDIA and ATI cards for 3D games. Lucid promises excellent performance ánd compatibility regardless of the drivers installed! MSI is, at the moment, the only vendor adopting this technology and, from the looks of it, will be the only one for a while. As the question was posed we were expecting a clear answer, but the Gigabyte spokesman only mentioned they were just looking into the capabilities of the chip. No word about an actual product housing the Lucid Hydra, which could mean two things:

Comment from TERW_DAN @ 2009/11/09
Great article, it describes the event perfectly