Taipei 2015: Intel invited the little Shrimps over for a private bench session to explore the freshly released Broadwell architecture. Even though the NDA is lifted it has to be mentioned that not all Z97 boards are fully ready in regards of optimal bios support for the new processors. The initial runs though probably tell the tale of what we can expect in a few days when everything hits the retail shelves.

Broadwell is here for the desktop market, based on 14nm architecture Intel is closing the gap between them and their main competitor. This generation is all about the integrated Graphics core, the Iris Pro 6200. Aided by 128MB of  eDRAM  it easily doubles the graphics power of previous HD 4600 releases. Comparable to what we experienced when testing the Gigabyte Brix Pro with the i7 4770R Iris Pro 5200 versus the HD4600, though the new 6200 Pro is even more powerful. 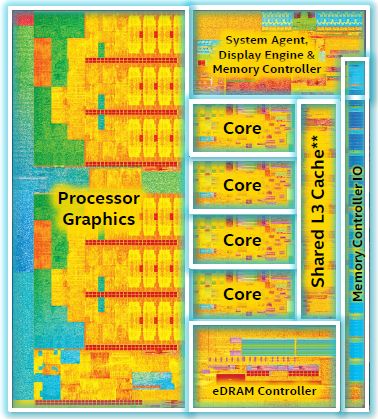 We had several setups at our disposal, though it became rapidly obvious some manufacturers are not 100% ready with their biosses to allow full support of this new silicon. Not allowing much changes in the bios and even if sometimes made a change for the better it sometimes resulted in a slower running setup lol. There's still some work to do for the bios engineers.

Below we are comparing the two desktop flagships: the Intel Devils Canyon i7-4790K and the new Broadwell i7-5775C. Both CPUs running at stock. In raw MHz the new 5th gen CPU is in a total disadvantage as it only runs at a mere 3.3Ghz versus the 4ghz for the DC i7-4790K. We tried to balance the clocks. This to do a more fair clock versus clock test, though neither the Gigabyte nor the ASUS boards allowed us to achieve this. So this will be something we will have to redo once back from Computex.

On the below picture you spot two scores. The left one is from the i7-4790K versus the 5775C on the right. The OpenGL test shows the true power of the new Iris Pro 6200. Processing power is not unexpectedly lower as we have to take into account the 700MHz lower frequency of the i7-5775C CPU. In the CPU-Z window we can spot a low idle voltage of 0.757 Vcore which is also way below what we are used on the 4790Ks (+0.9ish voltages) 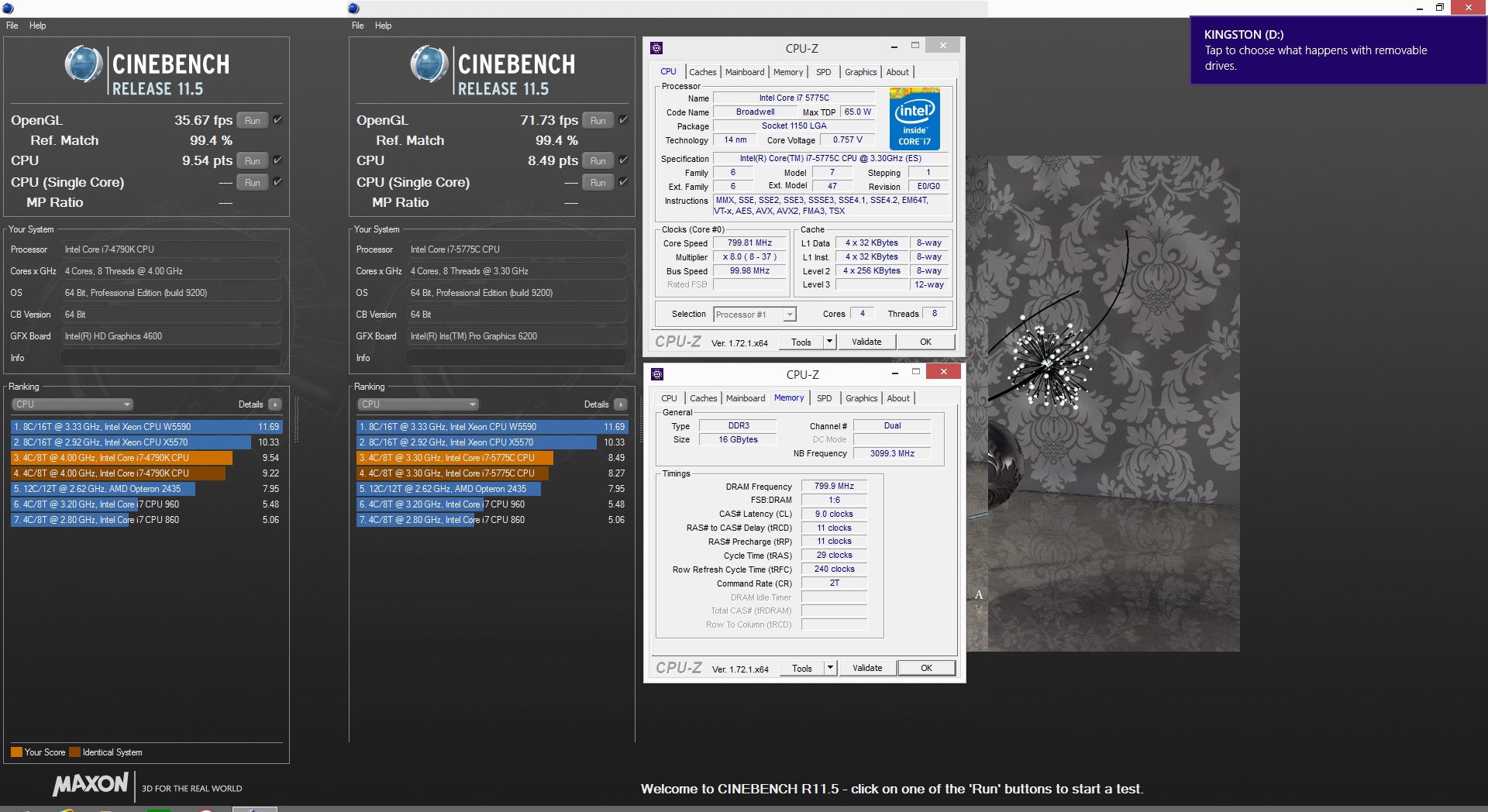 For Cinebench R15 it is the same story. A solid step forward for the desktop Broadwells in the graphics department versus any previously Intel released desktop variant. 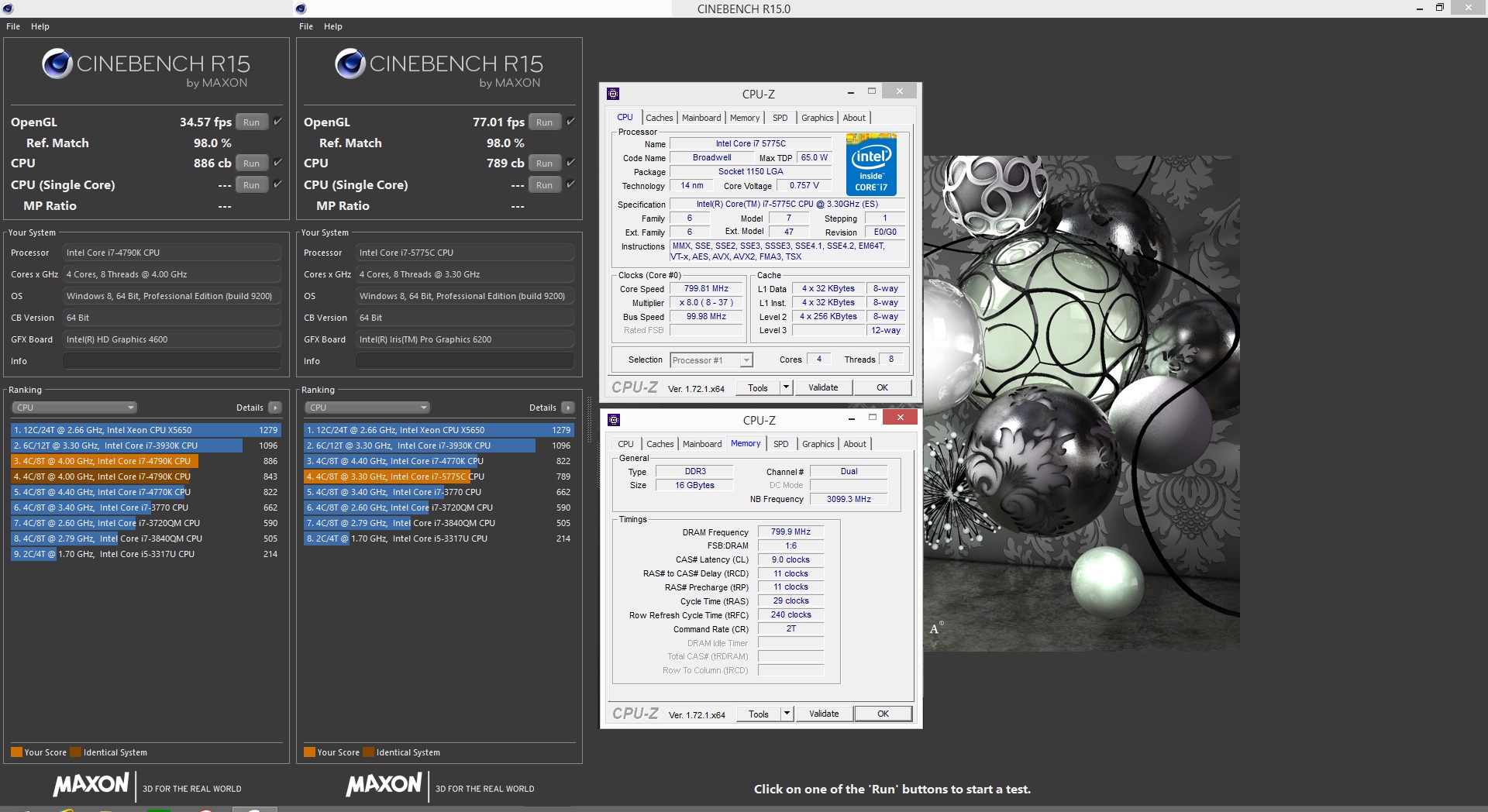 While the above might look over the top, we have witnessed ourselves a passive cooled setup running an i5-5675C was continuously running race games in high detail on a huge TV screen. Is this the end of some older consoles? 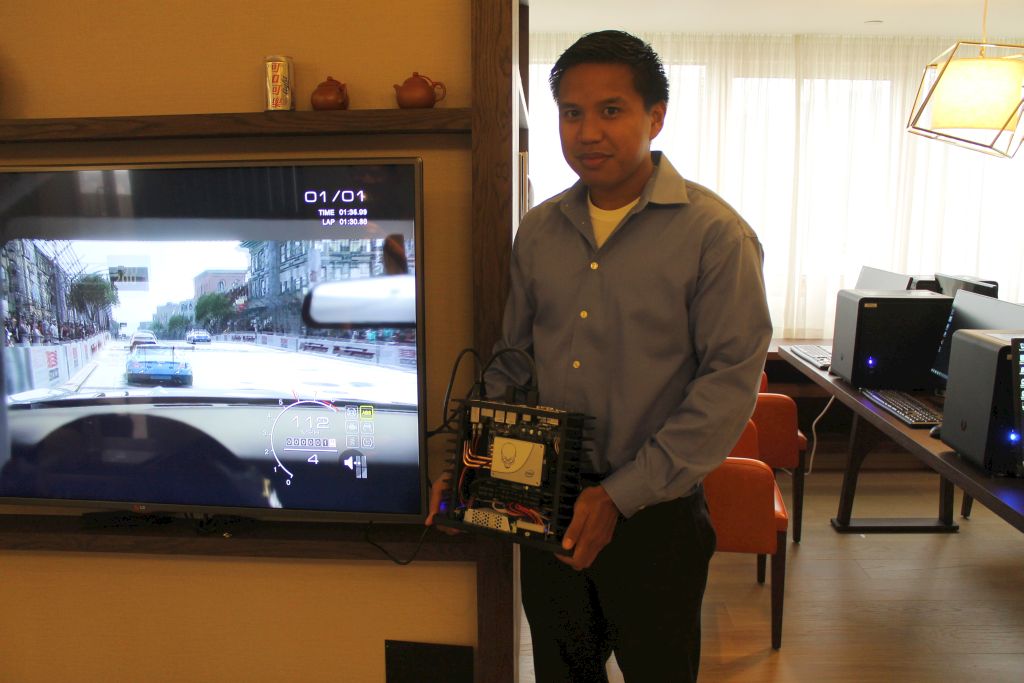 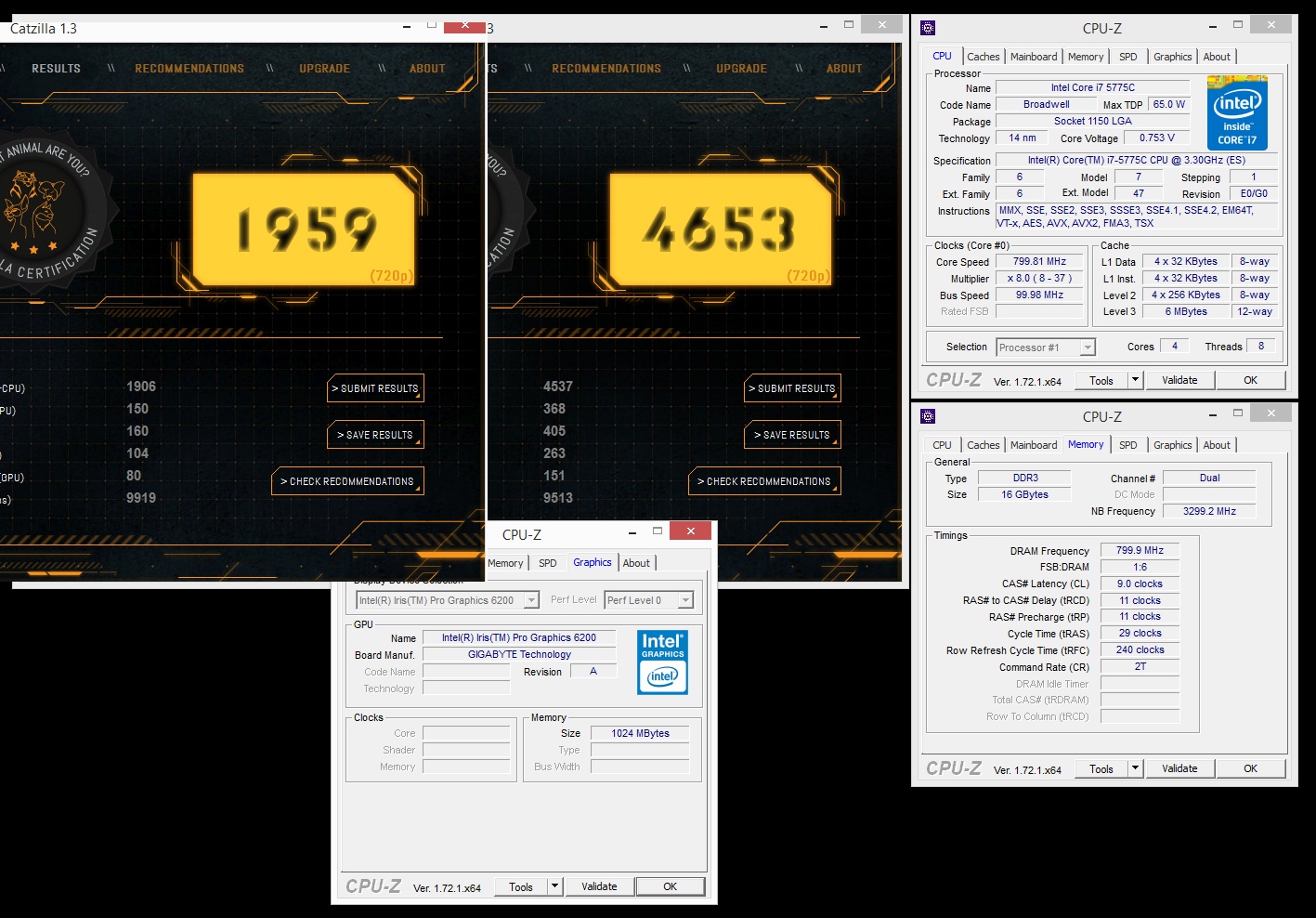 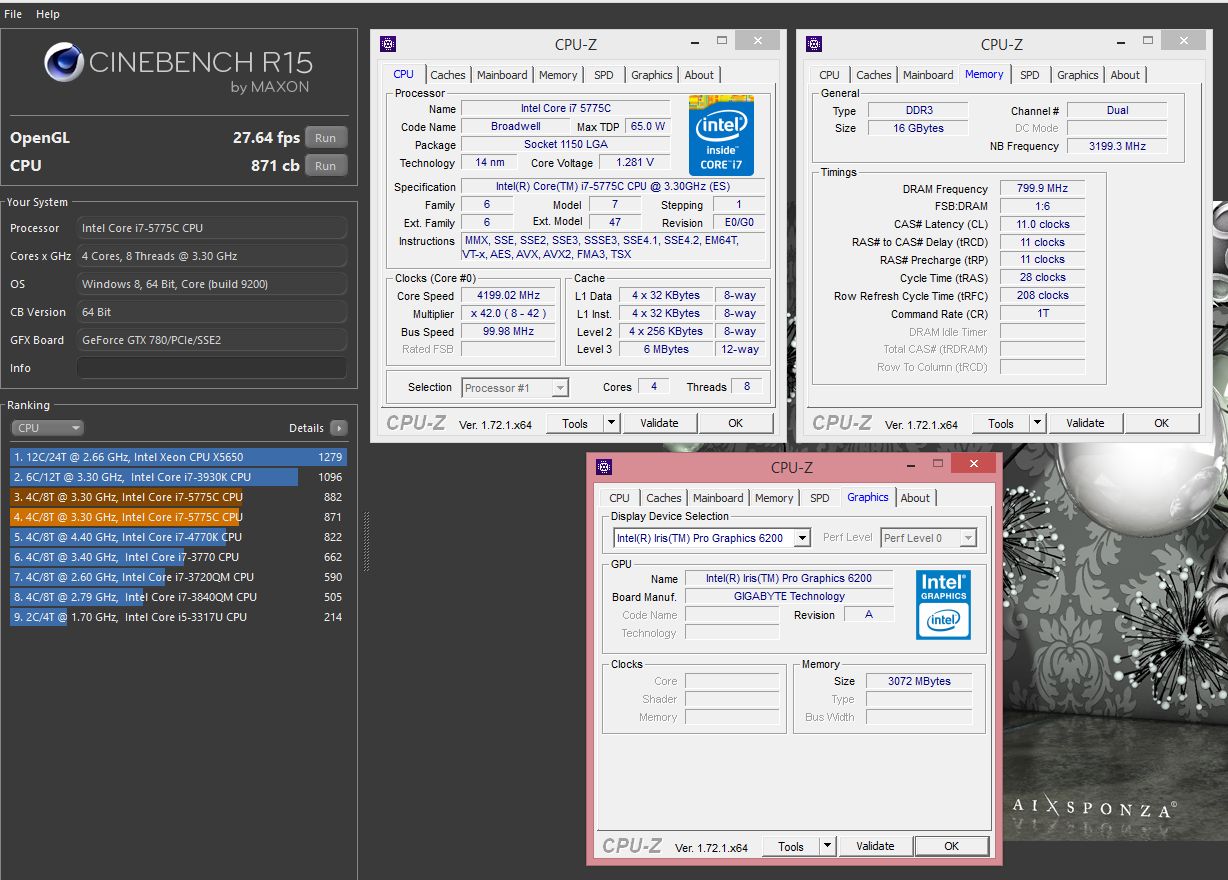 Intel engineer François Piednoel had an overclocked i7-5775C on display and it reached near the performance of a stock running i7-4790K. Most people will not be impressed by a mere 4.2Ghz OC, Though this is not what this generation is about. Lower power consumption and high end graphic performance in a tiny package is what is available right now for the Intel desktop segment. Ideal for building low power PCs without a dedicated graphic card. Yet still being able to play many games at high FPS at all this at a gaming resolution and medium to high detail setting. Once we get the official samples in we can properly judge what this new silicon is exactly capable off.

We like to thank Kristof from Intel who made this possible for us, thanks man!