Last year Gigabyte organized their first World Wide Overclocking event in Taiwan. The 2008 event was open for invited overclockers only. This year however, they put up an online entry system. So not only the happy few could participate, but everyone out there running an overclocked Gigabyte setup.

Written by Leeghoofd, Blind and Massman

Before we tell you about the actual overclocking day in Eindhoven, a few quick words on the online submission system. First of all, although it's more than understandable that Gigabyte only allows people to submit results using Gigabyte products, we believe the competition would be even fiercer when people would be allowed to use any brand to qualify for the Gigabyte overclocking finals. To have an even more competitive final, the Gigabyte team could also work together with Hwbot and the Overclocking World Records page, where you can find an online overclocking league in which more than 15,000 people compete in all the latest benchmarks.

Long story short: the top 3 per group were allowed to go to the next round in Eindhoven, The Netherlands. Belgian and Dutch entries were merged in one group, as were the German and Swiss entries. The submission system was pretty simple: whoever had the fastest SuperPi 4M score, wins. Not many scores were posted at start, so no one really had a view on what had to be done to reach the finals in Eindhoven. A few teams even awaited the deadline to submit their score!

Massman and myself both sent in our best possible result, but sadly enough none of our entries was good enough to head to Eindhoven (well, Massman's was actually better than the best from Germany). I didn't have an i7 setup ready so I had to compete with my Core 2 Duo system against four i7's. Massman had a very bad overclocking 965 Engineering Sample and lost his third memory channel whilst overclocking ... bad kharma, I guess. Pt1t, however, got his free ride to Gigabyte headquarters and opted for Massman as support. Albrecht (Leeghoofd) and myself were kindly invited by Gigabyte to cover this event for the Madshrimp Times, well ... as press. For us it would be a nice meet and greet with some of the top overclockers of HWbot.

These 6 teams got the chance to battle it out, head-to-head in a live overclocking contest at the Gigabyte headquarters in Eindhoven. Objective: One ticket to the European finals in Prague.

These six overclocking teams confronted each other an attempt to reach the best score in three different benchmarks: SuperPi 8M, 3DMark06 and 3DMark06 SM3.0/HDR subtest score. For the 2D round, SuperPi, all teams had an hour and a half to go as fast as possible. For the 3D session, the timeframe was a bit longer: 1h 45min. In between there was a 15 minutes break for the contestants to eat, drink, visit the ladies men's room and have a smoke if necessary.

Here's a picture of the event room : 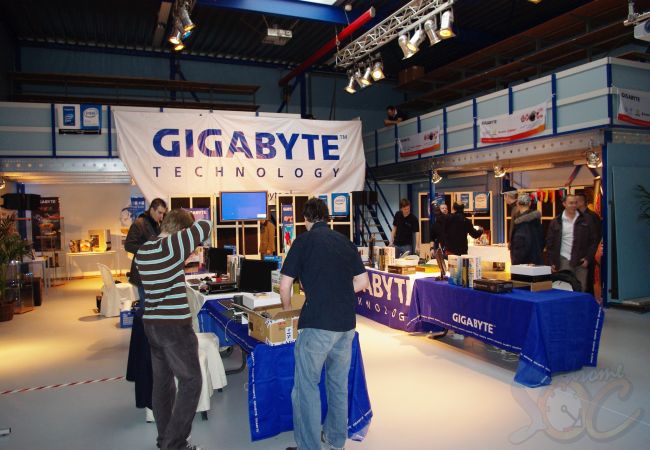 The Trip to Eindhoven :

Since Shrimps do experience the effects of the global crisis, we opted to carpool and started the maiden trip to Eindhoven City on late Friday evening. Even though Massman prepared the trip by printing out maps, gathering hotel info, etc... we still managed to get lost. Maybe that's one of the reasons God created women: to read maps(*). Finally, at 01:00 AM Saturday morning we arrived at the hotel and although the neighborhood was very inviting, we had no time for a few brewskis and exploring the local scene. Bed time was required for the old and aging Leeghoofd and the youngsters agreed on that settlement too. First mistake we made was not bringing the GPS and second mistake was rapidly discovered as we had absolutely no clue where the event took place. No laptop, so no internet at our disposal. A quick phone call to Jort (luckily he was still awake) got us at least some more info, but we had to find the other competitors as soon as possible at breakfast.

After some brief snoring action and a quick ironing of the face we hooked up with the other teams during breakfast. The Swiss and German team also stayed at this nice hotel (pre-arranged by the Gigabyte crew). After some handshakes we quickly discovered the immaculate Swiss team had everything nicely mapped out (where did I see that before).

Apparently, it was only a 10 minute drive from the hotel, so we had time to spare. Really guys, 3 vehicles, filled with men, not being able to find the location is not good publicity for the male race. So after some nice sightseeing and revisiting the same roundabout trice, we found the Gigabyte headquarters. We were in our typical male mood, so we arrived at the venue 20 minutes too late. We suspected the Dutch participants already claimed victory!

Below is a video extract made by mister Trouffman himself (owner of Syndrome-OC.net ) He travels all around the world to get the most wicked interviews and amazing pictures of the hardware masters in action. (* note, the video loads with HQ enabled) 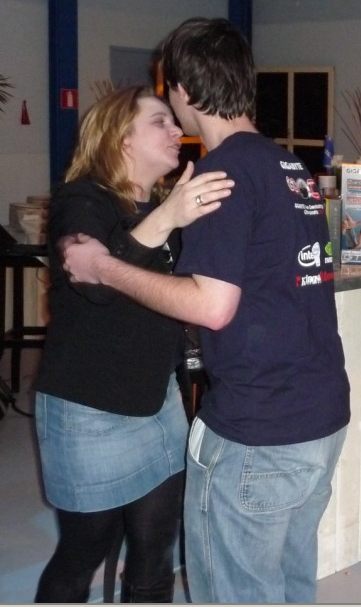