Hwbot launched a nice new competition called HWBOT Country cup a while ago. Taking 7 benchmarks over 7 weeks with each new stage, limitations (hardware, benchmark wise) only being announced a few days before the start. As it was a country cup an average of the best 3 submissions would count. Time to regroup instead of going for individual or team benching. Belgium has got very few active OCers left, luckily for OC Team Be we got some support form PC-overware.be team. Stage 5 had Wprime32 as chosen benchmark and the main hardware limitation it had to be run on a single core CPU.

A quick look at the best single CPU scores at HWbot clearly indicated that the most performing solution would be the AMD Sempron 140. At a pricing rate of a mere 35 euro, I quickly grabbed a sample via Hans from JAHA. Let's see what this little puppy can do under air and more extreme cooling : Phase and LN2. But beforehand a small intro on the CPU itself.

The AMD Sempron family is known as a very affordable performance range of CPU's. Affordable is the keyword as this CPU only costs 35 euro's. I can't even find some 2nd hand CPU, that is based on older and probably far slower technology than this puppy, for that kind of money.

Here's what AMD has to say about the Sempron series : 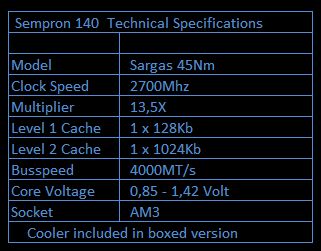 The Sempron 140 is foreseen to be run on an AM3 socket type mobo, thus supporting DDR3 rams. Of course backwards compatibility is warranted for DDR2 mobo versions.

Being specified as a single core CPU, this cpu is in fact a crippled dual core CPU. Which means if you have a mobo, that can unlock the 2nd core, and a CPU that is willing to give into your demand you end up with a very potent dual core for a ridiculous price.

Sadly for me my retail sample was very stubborn. The MSI GD70 motherboard is known to be a good unlocker, but if the CPU isn't cooperating you will end up with a no post. We even swapped to other motherboards (one more MSI and two Gigabytes), to rule the MSI out, but it resulted in the same no post behavior. Bad luck, but that's just the way it is if you can only get one CPU to test. On with the show...