Since the launch of the new CPUs from Intel, nicknamed Clarkdale, we have seen a fair share of overclocking attempts; some people even breaking world records, pushing the a Clarkdale over 7Ghz. We have read reports from overclockers who had issues with pushing the BCLK higher when the IGP was enabled. In this article we will explore possible solutions to help circumvent this limit, so you can enjoy high BCLK while using the IGP.

With records being broken left and right with the new Clarkdale CPUs from Intel it was high time to see what the different limits are and how to “break” them to achieve even better results. In a recent finding published at Anandtech they ran into a BCLK “wall” of ~170Mhz when they had the IGP enabled.

In our testing however we were able to push the BCLK to 200+, even reaching 220Mhz. So what is causing this discrepancy in results? Time to find out

"We've run out of time to explore every angle of IGP performance and QPI ratios in this article, but we will endeavor to cover this angle in a future article if need be. Right now, we'll say it appears that you're going to be BCLK limited south of 170 MHz with the IGP in tow. Subtract another 20MHz off that for 8GB configurations, and bear in mind that you'll need to use low memory speeds, capping you to a maximum of around DDR3-1333MHz with things in their current state."

As you can read in the quote, it looks like the BCLK overclocking capabilities are hurt quite badly by enabling the integrated graphics processor. With default configuration the limitations can be found below 170MHz BCLK with 4GB of memory, and even lower using 8GB of memory. In our testing, however, we obtained these results: 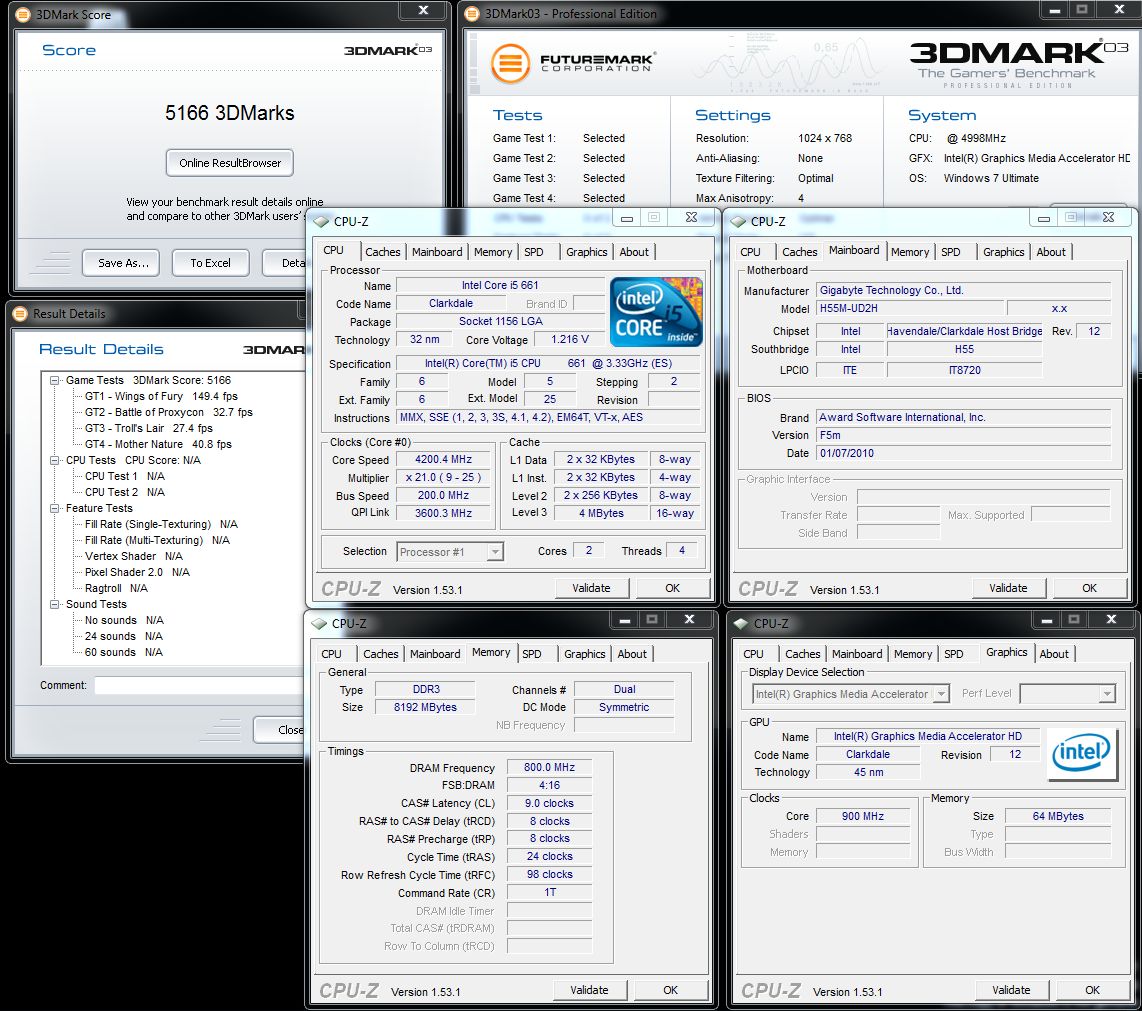 As you can seen in the screenshots, a perfectly 3D stable configuration using the same Core i5 661, 8GB of Corsair memory and a BCLK frequency of 200MHz in combination with DDR3-1600MHz speeds. In addition, we also reached a BCLK frequency of 220MHz in a 4GB memory configuration resulting in an astonishing (or not?) DDR3-1760MHz. On the next page, I will be explaining how we managed to get this result and give you the hypothesis by which we explain this behavior, but first let's have a look at the used test setup.

The multiplier itself is one value ... officially.
Comment from Massman @ 2010/02/02
Straight from Intel datasheet:

Comment from Massman @ 2010/02/03
It seems that the clock frequency of the Intel GMA can vary between 166MHz and 900MHz. For desktop CPU's, that's 733 and 900 only, for mobile the igp frequency is automatically decreased when turbo mode is enabled and you're running high load CPU applications. So: