Overclocking is in, overclocking is hot! At least, that´s what these last few months are telling us. In the contrary to the previous years of overclocking, in which it was a big taboo for many manufacturers, many top notch brands are deciding to support the overclocking community. We took a trip to Amsterdam, where MSI held its first European Overclocking Challenge and due to some unforeseen circumstances, our editor even participated himself. Read our full report, coming to you straight from between the OC trenches

In terms of overclocking scalability, MSI isn't really known in the overclocking community. Although most boards suit the needs of the basic overclocker, when you need to compete at the absolute highest level, many people will not even consider an MSI motherboard to overclock with. Why? No idea, but it seems that MSI motherboards are not always capable of getting to the highest overclocked speeds.

Overclocking events all around the world.

The P45 chipset was introduced to the big public as thé best chipset for overclocking, while both Asus and Gigabyte already organized an overclocking event, MSI started theirs at an earlier date, involving more people and countries, actually making a real contest.

Although many of the best overclockers in the world participated in those Asus and Gigabyte contests, many people seemed to see the events as pure marketing. It was all about pushing the systems to be able to push the sales of the motherboards, not really to see who the best overclocker is.

So while MSI’s final OC contest was not the first, they did start out their planning earlier and were really looking for the best overclocker in Europe. When I arrived at Amsterdam, last Friday, I had the chance to see the building in which the event took place before any other overclocker. My first reaction? "Excellent". 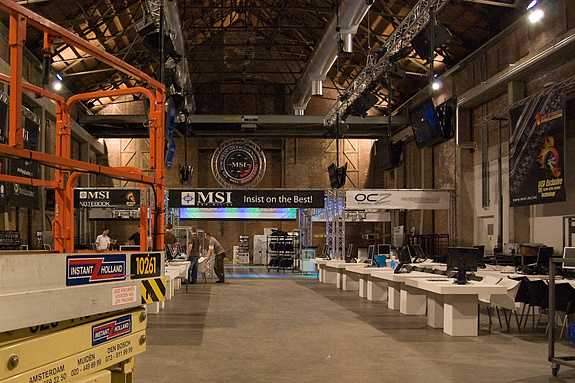 After a quick chat with MSI representatives, I found out that the MSI overclocking challenge has already been on the agenda since February. Unlike my initial thoughts, the idea of an overclocking competition was not proposed by Intel (as they were claiming the P45 chipset to be thé overclocking chipset), but was a concept that was proposed inside MSI. As the conversation went on, I was getting more and more convinced that the event was not entirely focused on the marketing aspect, but on the overclocking fun and to let the overclockers come into contact with the firm; a thought that you'll find to be the common theme through this article. 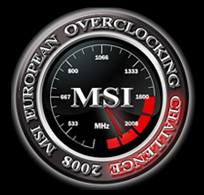 Comment from jmke @ 2008/08/28
where do you see this typo ? :/
Comment from Massman @ 2008/08/28
There were A4 printed papers on the desk of the overclockers with the name+flag of the website/country. The Belgian team had 'www.madsChrimps'.

and Geoffrey makes the same mistake

Happy to join this competition ! thanks at madsChrimps ^^

But with my friends pt1t we've badluck !!

and after impossible to reboot... We kill the motherboard...

Sunday :
We arrived at 10h, Pt1t vmod the new motherboard, isolation and assembling take 2h because we had some problems with vcore

At 12h we begun the benchmark, and bad news the motherboard it was very bad!! max 615 for superpi @ 2,05v vcore. For the rest of benchmark we can't improve our scores...

For my part it was my first experience of OC contest, and LN2...
The atmosphere in and out of the competition it was nice with the other overclocker...

At the newt year