OC-Team.be aims to group the efforts of the Belgium overclocking community under one label, delivering world breaking records using what ever hardware they can lay their hands on.

OC-Team.be aims to group the efforts of the Belgium overclocking community under one label, delivering world breaking records using what ever hardware they can lay their hands on. While the Belgian community is small, it’s known for a tight cooperation between the members, a small country allows them to meet often to perform sub zero projects with either Liquid Nitrogen, Dry Ice, home made phase change cooling and more.

Originally created by a few loyal forum members from the Telenet (ISP) Gaming community, they have now stepped up to provide an international front end to give exposure to their overclocking endeavors as well as reach out the like minded Belgian enthusiasts to help grow their community.

Madshrimps is proud to host OC-Team.be articles and be a home and portal for this promising enthusiast community, OCT’s articles can be found through-out the site with a few ones already published and more lined up.

The Hardware Bot website HWBot.org scans and gathers the best scores of enthusiasts all over the world and allows you to gain HWboints for good results. Team competition has increased the popularity of the HWBot tenfold and OC-Team is competing for a higher rank in the TOP 20 of world teams. Together with the Madshrimps crew they have joined forces to climb up the ranking. 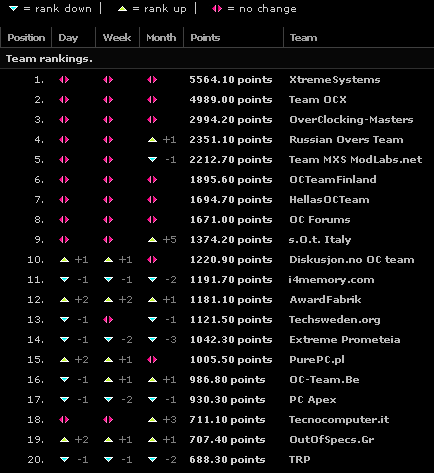 Founded by Massman, Blind_Ripper and Jort, they have gained quite a following over the years, membership is not closed and anybody living in Belgium (or outside ;)) is free to join this community.

To give more exposure to the overclocking community and their projects the OCTB members will occasionally do demonstrations at local LAN parties, using different cooling methods and home made containers to chill the latest hardware and overclock them way beyond the manufacturers’ specifications.

Past OC Articles and Reports

The overclocking spirit has been among the Madshrimps for quite some time, below you can find an overview of past overclocking reports, followed by the upcoming content by OC-Team.be