3rd of June 2014, Computex is well on the way. Outside the normal Nangang venue, Intel hosted in cooperation with HWBot the ultimate OC event. Even while being considered as a paper launch, the Devils Canyon processors are now officially launched, thus Intel love to put them in the spotlight. How better than via a high end level OC to show off what these new improved processors are capable off? A big thanks to Adeline and Timothé from OverClocking.TV for the photos.

The teams quickly started the assembly of the hardware, then were required to install the needed drivers and benchmarks. Luckily we found a workaround too get the Intel eXtreme Tuning Utility without any access to the Internet.

As this was a huge event with hefty money prices, some overclokers got very creative: imagine a mini keyboard build in a foot switch. This allowed John Lam from HKEPC team (who else) to validate a tad faster then via using the normal F7 key on the keyboard. 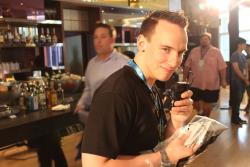 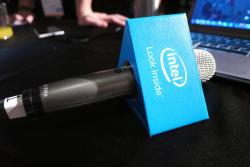 The MC of the nite was mister Isaie Trouffman, who was backed up by the rest of the Overclocking TV team Xyala and his girlfriend Adeline. Video footage was streamed by another professional camera crew. 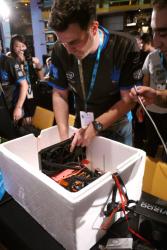 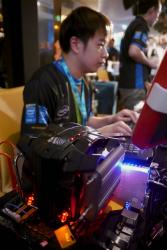 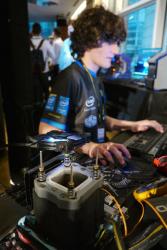 The Pro air/liquid rules were interpreted in several different ways. Some installed the entire setup in a styrofoam box, this to allow maximum cold air to flow between the radiator fins. Others opted to provide chilled air to the radiator by pouring liquid nitrogen in a cardboard box or LN2 container. The ASUS team even put the beers inside to chill these while doing the overclocking. 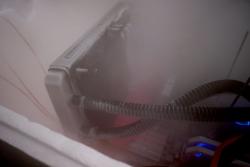 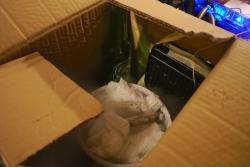 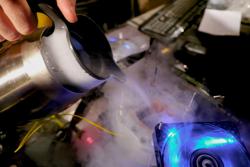 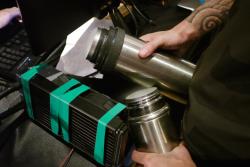 Comment from Teemto @ 2014/06/06
Looked like fun. Especially the inventive ways to air and liquid cool with LN2