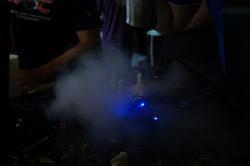 Last year we were asked to give an OC tutoring demonstration at the Tones PC shop of Heist op den Berg. Being a big succes as the participants were very happy and enthousiastic afterwards, maybe it was time for a sequal. This year not Asus, but Gigabyte jumped the gun to provide us with the required hardware so we could introduce 8 lucky winners into the world of overclocking. As the concept of last year was pretty okay, it wasn't required to make any big changes. Centre of the show was Gigabytes brand new X58A-OC board. Designed by overclockers for overclockers, how brilliant is that !

On Friday me and Massman arrived at Tones. Not only because we knew it was french fries day ( yes belgians have certain rituals we strictly adhere too) but also to setup and pretest the brand new Gigabyte X58A-OC boards. Myself already had a week to play with one of the G1 series boards : The Sniper.

Idea was to setup 4 platforms with identical hardware. Though I suggested to use the available CPUs : i930, i975X and two i990X CPUs. As the participants could get a better idea of the performance difference, OCability,... Plus for the 930 CPU, it requires a bit more work as you need to play with the Bclock too. Giving you a better idea of overclocking in stead of just increasing the multiplier and Vcore.

The available hardware was : 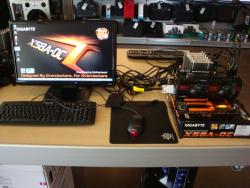 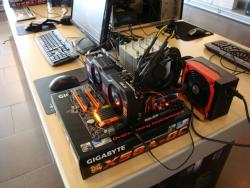 Pretty clean setups to play with. Even Massman surprised friend and foe as he even cable tied the PSU cables. 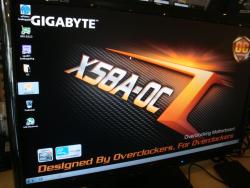 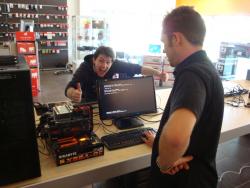 Gigabytes provides some cool backgrounds, which we kindly used... Pieter Jan giving thumbs up coz the food arrived. Bert ( the "I look more intelligent then you guy" on the right ) kindly assisted us with installing the software. Windows 7 64 bit ultimate, latest Nvidia drivers. Software allowing to OC the CPU  was Gigabytes own Easytune soft and MSI's afterburner (non extreme version) for the GPU overclocking.

To be sure about the air coolers performance, Bert opted to swap the original boxed cooler with a higher RPM rated version. 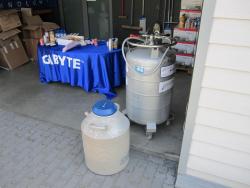 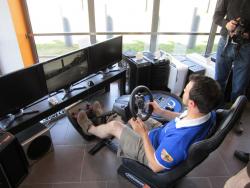 Filling up the dewar and as usual loads of food. Testing the setup for the Tones Grid 3 launch date. The setup was not yet configured correct for triple monitor usage (so I had an excuse for my bad performance :p)