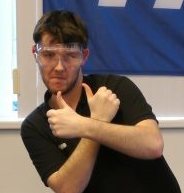 It's that time of the year again. Overclockers all over the world gearing up to get them precious tickets for the World Finals in Taipei. But before taking the KLM 747 to Taiwan, there's a long road ahead. For our Benelux clockers an online event was created at the Tweakers.net website. As usual Superpi 32M was one of the chosen tests. The other one was the new 3DMark011 benchmark. Weapons of choice for this online qualifier would be either a very fast SandyBridge CPU or an insanely fast ( read +6.4Ghz) Gulftown.  Since only single GPU cards were allowed GTX 580 was an obvious choice. Two teams from Madshrimps, Massman & Pt1t and Gamer & Leeghoofd submitted a score to grab at least one of the three spots for the Benelux qualifier at the MSI HQ in the Netherlands. Last wednesday we got the official mail from MSI that both the [M] teams were selected. Two belgian teams vs one Dutch Team consisting of Viss and Expat_Griz. How did the belgian waffles do in last saturdays event, time to read on...

To avoid damage to the packaging we were allowed to remove the dimms from their blisters ( since most of the used gear has to go back to it's supplier ) Myself and Pascal (Teemto) did some pre cable arrangements, this to avoid clutter and each one had to take care of his duties. Marc from Tweakers assisted Bart ( Viss ) as his partner (Expat_Griz) had just landed at Brussels National, still being hours away from the event location. Niels from MSI gave the start signal and I have got no clue how long it took but Team The Daddies (what's in a name) was the first to be able to boot into the Windows. Our only concern was how to turn on the monitor lol :p 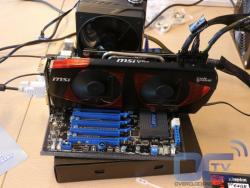 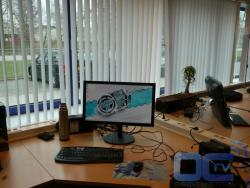 Wickedly enough we were not convinced that we were dealing with an SSD. Boot up times were painfully slow (probably due to the (pre)Os install ). By gaining this point we matched Pieter Jan and Thomas' team. They already had one point due to overal best scores in the online qualification.

We and Bart used the air cooler, by just putting it on top of the CPU. PJ and Thomas just used their CPU pot. 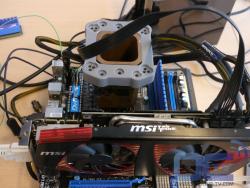 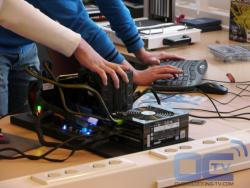 Round 2 : MSI has another unexpected challenge for us : be able to keep a steady 60FPS in 3DMark06 GT3, while keeping the power consumption to an absolute minimum. This is very contradictory to what we usually do when overclocking. Disabling all powersaving features in the bios is our first action. Now we had to maximize their efficiency.

We lowered the Bclock to 100 and dropped multiplier to 25. The GPU speeds and voltages were minimized via the MSI Afterburner software. Initial runs were below the 60Fps average. At first topping around 45FPS. Upping the GPU clocks didn't help at all, we needed more CPU power. Slowly working our way till about 3.3Ghz we got very close to the target. With the score just being above or below 60FPS. Since we only had 2 tries for a good score we decided to up the Bclock to 101 so we got 3240Mhz running giving eacht a steady 60.3Fps. Sadly our board didn't want to enable EIST at all ( we even showed it to Dennis). The bios setting was selected yet it still kept it disabled, so our CPU was running flatout all of the time. Also going with just 2 cores resulted in a no post. Only option to reduce even more the power drain was to unhook the air cooler fans and those from the GPU... one trial run went okay, the other one crashed as the GTX480 heated up fast. The other teams had no issue with EIST nor with 2 core action... tweaking, tweaking Albrecht... 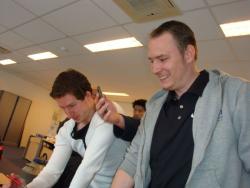 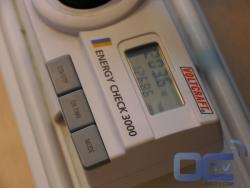 Once the rigs were booted the two referees (Niels and Marc) logged the power drain at regular time intervals. The overclockers were kindly asked to leave the room. This due to keep the obtained scores a secret, thus enhancing the tension...

Looking later on most lowered the auto voltages of chipset, Dram, CPU, etc,... similar settings though the outcome ( see last page ) was quite huge. 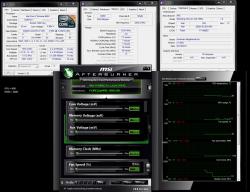 Round 3 : Never took place as we wanted to avoid loosing time to bench hard with the Liquid Nitrogen.