Notebooks, we see them everyday. At home, at your work, on the bus,... you name it. These portable PCs are considered common now. Notebooks have gone a long way, not solely being designed anymore for the businessman. Asus is targeting the multimedia/gaming enthusiast with this G51J 3D version. Not being an avid fan of gaming portables, I might be in for a nice surprise. Without spilling any more words, let us have a look at this Asus 3D Notebook creation.

We first saw this laptop at CeBIT 2010. But the laptop model itself has been around for a bit longer than that. I did some research and already found reviews dating from end of last year. But Asus added later down the road the NVIDIA 3D pack, to give it that extra dimension. I've never been into laptops, especially as they are in my book, not really intended for gaming purposes. Mobile CPU's and GPU's have never been able to convince me. Usually the specs sound nice, but are far slower than their desktop counterparts. And now Asus is promoting 3D gaming on this laptop. Let's see if this beauty can persuade the skeptics.

First let's dig in and find out what's under the hood : 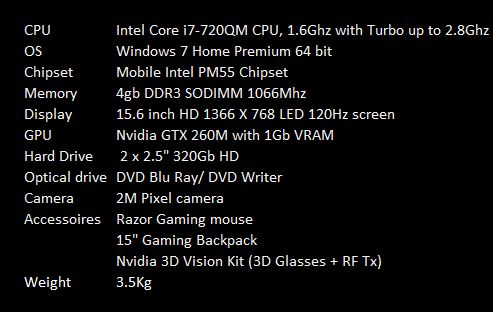 Wow, an I7 mobile CPU with 4 real cores hyperthreading enabled. Massive CPU power galore, but how hot will it run ? How long will the battery hold up when running flatout ? The GPU power comes by NVIDIA, a GTX260M. Not a bad gaming setup there at first glance, but sadly it's hooked up to just a 15.6 LCD screen. Two dimms of 2Gb, totaling 4gb of DDR3 ram and a duo of 7200RPM 320GB Harddisks top off the specs. 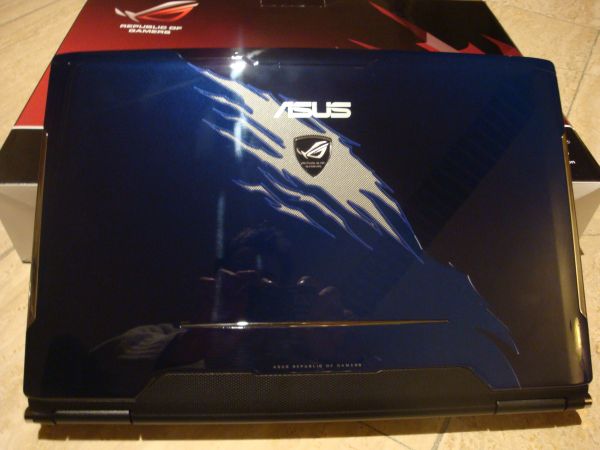 Pictures don't really do the nice paintwork justice. It's really an eye catcher when you get it out of ya bag. It really makes people drool 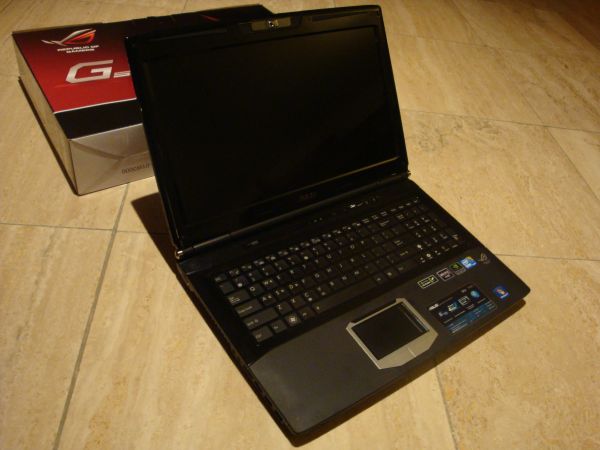 When opened it shows a slick and cool design. The keyboard action is pretty good and is lightened up by LEDs. The intensity is selectable via a function button. When the laptop is in suspend mode the Asus Logo and the stripes will flash like a slow heartbeat. 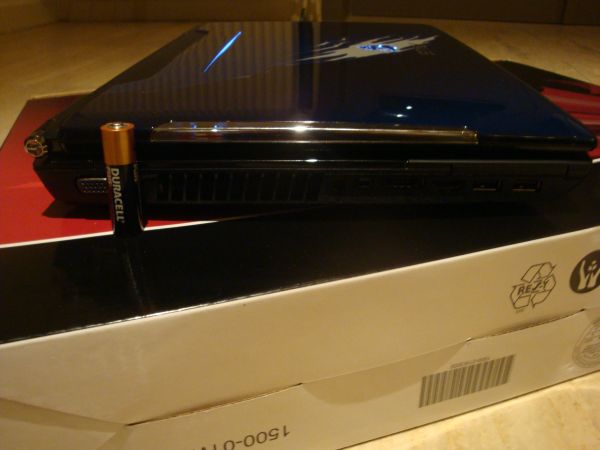 I put a Duracell AA battery next to the laptop to give you an idea of how thick the laptop is. You can spot the heartbeat effect with the illuminated ROG logo and stripe below. Note the massive exhaust opening to expel heat from the CPU and GPU. 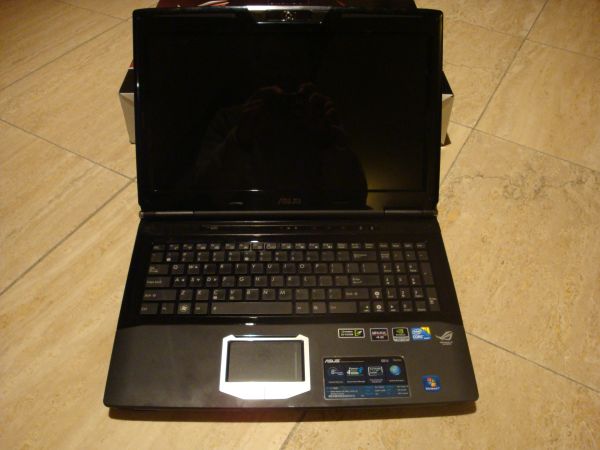 I can promise you when you open this laptop everybody will come and have a glance at it, as it has that little extra *bling* factor. Below a shot of one of the stickers that nicely lists the main components. More on the software on the next page but have a look first on what's inside. 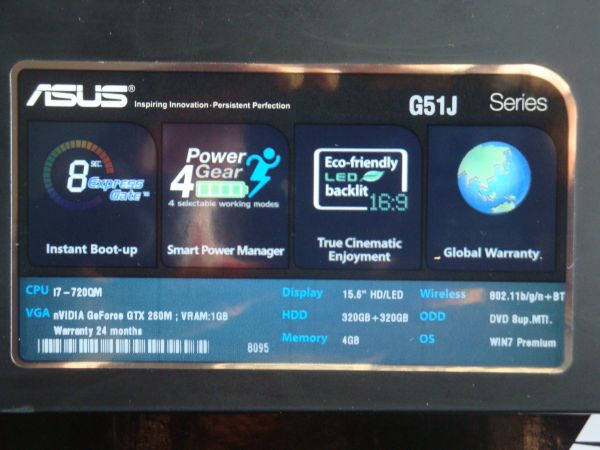 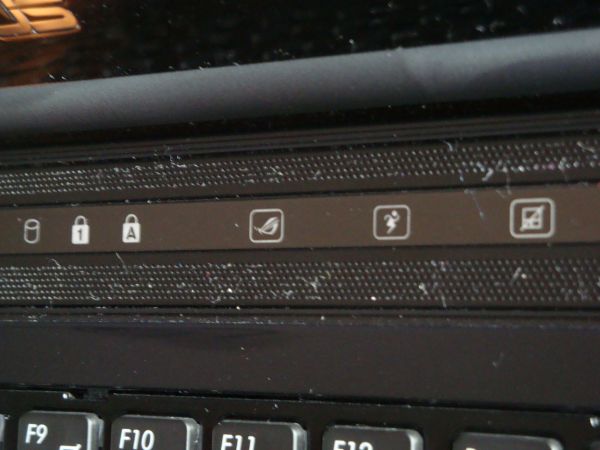 The 3 buttons on the right from left to right : The ROG symbol activates or disables the NVIDIA 3d mode. In the middle you have the 4 mode selection button and on the right is the enable/disable touchpad button. 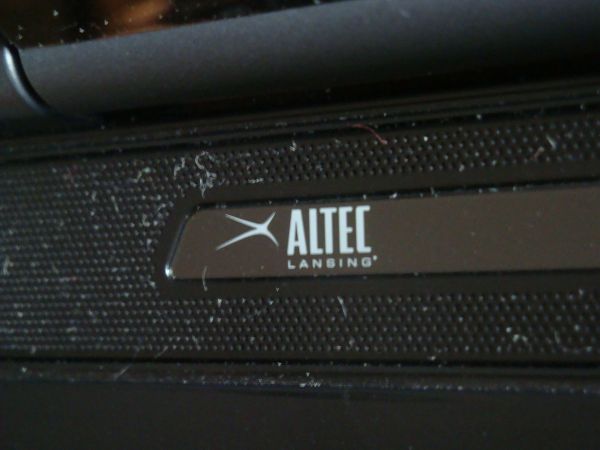 Audio speakers installed are by Altec Lansing, a well established brand in the speaker segment. Being boosted by an EAX 4.0 compatible soundcard to provide crisp and clear sounds. 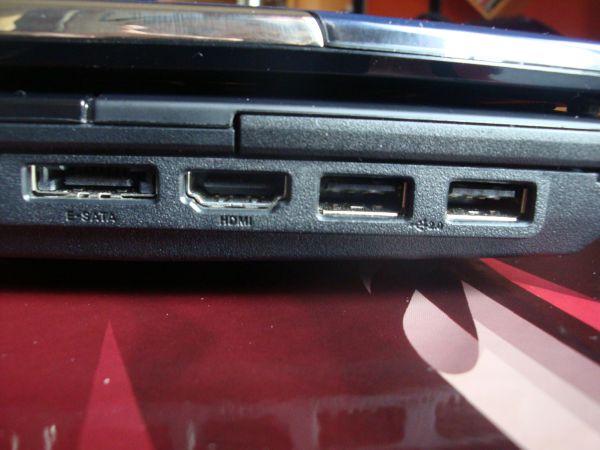 On one side we find a HDMI port, S-ATA2.0 and one eSATA connector. 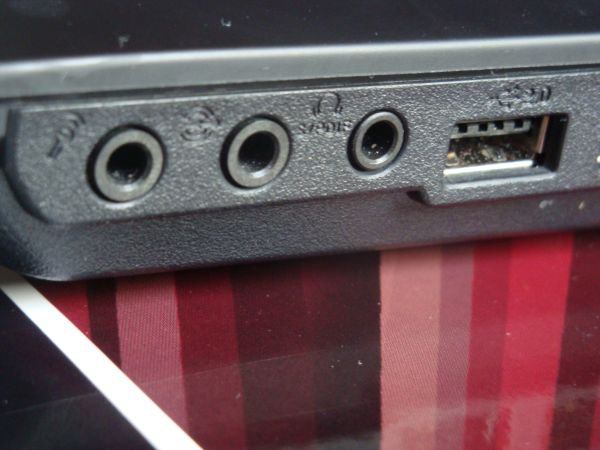 On the other side we got 3 audio jacks and one more USB slot. There are a few more USB ports on the back.
Comment from Stefan Mileschin @ 2010/06/11
I have myself an ASUS X55SV, bought two years ago and still going strong. It needs proper cleaning though, once in a while, but it can be done easily on the bottom, because I have full access to the blower.

The problem I have seen with the newer high performance laptops from ASUS at least is that even if they are using two blowers and cooling is much better than before, it is a pain to clean them up, because we have access to them only after removing the keyboard

Here is a bit of the disassembly nightmare: http://www.youtube.com/watch?v=Tp90M_N6dzs

This reviewed model does not seem to have this problem, which is good.