Looking for the ultimate aircooling ? Want to push more then 1.85v through that Athlon XP core and still have headroom for overclocking? Or looking for a very silent solution to keep it all cool and safe?
Look no further, we test ThermalRight?s SLK900U and compare it to its older brother the SLK800. And for reference we also include the popular Alpha PAL8045 and the Swiftech 462-A!

During the testing the room temperature was at a steady 21.5°C 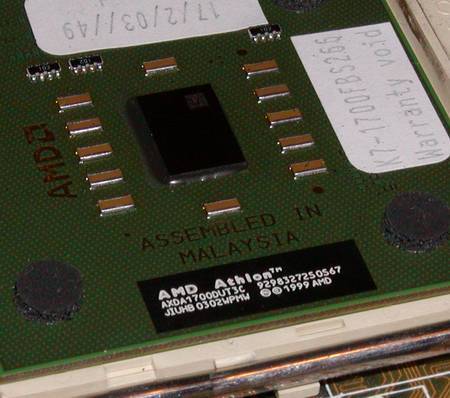 JIUHB - the good stuff. With a bit of luck, feeding it with enough voltage and cooling this baby down, you can get 2.2GHz! 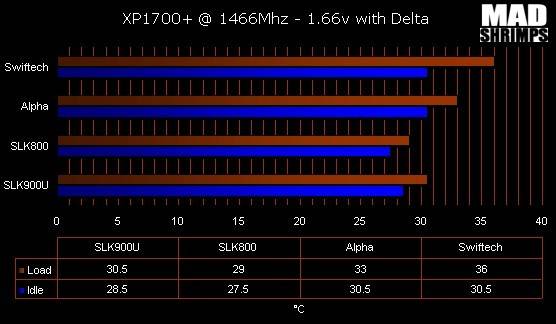 First up: warming up the Delta at a measily 1.66V, standard vCore for this Thoroughbred. The PAL8045 and the MC462 are keeping up with each other at idle state, but the Alpha specimen beats it on the load run. Not bad for those oldies, but they can't compete with the SLK's. The SLK800 surprisingly passes the SLK900 by on both the idle and load tests. 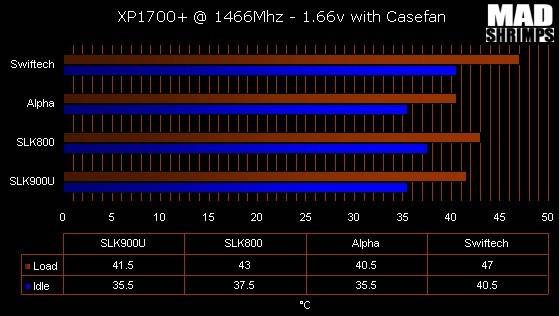 Out with the Delta, in with the silence. Let's spin up the YS-tech casefan, thereby simulating an airflow created by only casecooling. The PAL8045 seems to have the best structural design for this situation, outperforming any other heatsink in this test. The SLK900 performs better then the 800 version. This can be explained by looking at the structure: the SLK900 let's the air pass through it's fins, where the SLK800 is turned 90° and thereby completely blocks the airflow. In a real situation, the SLK800 would score better tho. 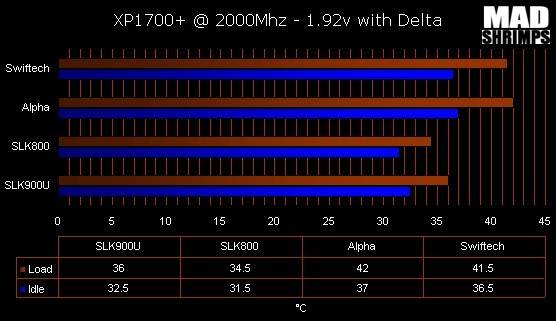 Time for tha real thing! Let's give this baby some juice and spice things up a bit. Once again, the PAL8045 and MC462 are each others equal. The SLK900-U keeps it at a comfortable 36°C under load, but get's a beating from the SLK800 which outruns it with a rockstable 34,5°C!