After testing MSI's GT780 gaming notebook I must admit I was pretty impressed by it's allround and gaming performance. Of course, a high end gaming notebook also carries a pretty beefy price tag. big screen , decent powerful GPU and CPU, 8Gb of ram, dual harddrives. Well the price tag for the included components was fair, but what happens if you want a gaming notebook and don't have 1500 euros to cash out? Todays reviewed MSI GT683R laptop might have you covered for a fraction of the price. The specifications of the GT683 don't seem that impressive at first glance, but maybe it can still pack some serious punch. Let's open the box and see what's inside.

The GT683R is packed in a similar looking cardboard box as it's bigger brother. Nice to see the return of the rucksack and the included gaming mouse. So absolutely no cutbacks there. Major change in specifications versus the bigger high end model is the smaller size of the screen : 15.6" vs a 17.3 HD screen and the lack of the steelseries keyboard. 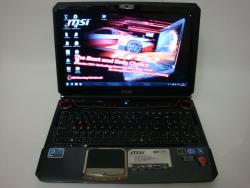 The CPU in our review model is Intels i5 2410M CPU. A dual core model with 4 hyperthreading cores running at a 2.6Ghz core speed. With the Turbo function it can boost up to 2.6Ghz when only 2 cores are active and even up to 2.9Ghz for single core action. Based on the Sandybridge architecture it will provide more then plenty of power for daily operations. If it's suitable for gaming that will be discovered a few pages further. 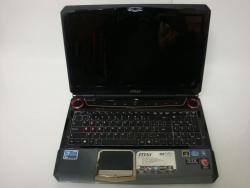 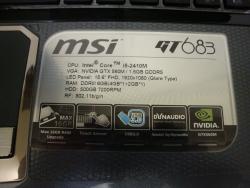 GPU power is foreseen by Nvidias GTX560M 1.5 GDDR5 version. It's GF116 based, sporting 775Mhz GPU speed and the rams run at 1250Mhz. Supporting DirectX11 and OpenGL 4.0, performance wise this mobile variant can be compared to a GTX450 desktop model. That might not sound impressive but take into consideration that the ideal laptop gaming resolution is mostly only 1366 x 768. With the GT780 we also mentioned this was the optimal resolution to play games at , giving plenty of frames per second to enjoy your games without lag or jerkovision.

A bit weird is the 6Gb DDR3 SDIMM ram configuration. In a single 4Gb and then one 2Gb dimm. Ram isn't that expensive, wondered why MSI didn't go straight for 8Gb. Maybe this is just a crossover between the 1000 euro price point for lower/higher specced models. As with the GT780 there are still 2 dimm slots free for more ram goodness...

For the Hard drive, and yes this time no plural, MSI still opted to go for the Western Digital Scorpio black version. Quick and agile was what we remarked with the GT780R, but those were running in RAID mode. Since there's only one Hard Drive installed, you can add your own or preferably an SSD to speed up things even more. 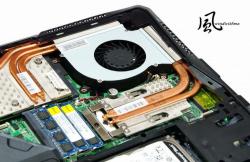 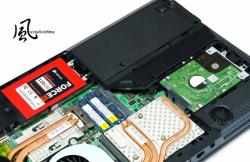 Big thanks to Windwithme for the pictures of the inside, as the reviewed laptop here was a lend from a friend. So not a real review sample.  I thought it would be cool to quickly compare it with the higher specced version. But as you spot the cooling design and board layout is similar to what we discovered under the hood of the GT780. Turn the page for some more shot sof this nicely designed laptop.