In this in-depth guide we show you how the extract the highest performance from your Geforce 8800 video card, push that GTS past GTX speeds and turn that GTX into an Ultra-beater by following the steps outlined. We evaluate the performance increases along the way by using real world benchmarks; Can a $250 8800 GTS compete with a $500 8800 GTX? Read on to find out. 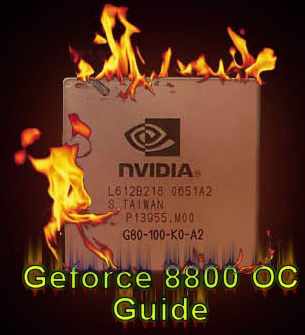 The last 6 months we had a chance to test a wide variety of G80 powered video cards; while we did overclocking tests in those reviews we thought it would be useful to dedicate more time on how exactly you can extract more performance from the Geforce 8800 video cards.

In this guide we’ll show how to find the maximum stable overclock speeds for both memory and GPU, as well as do more extreme volt modding to further increase overclocking potential.

To measure to impact of the overclock we test the performance at difference speeds to see how it scales in 3D applications and games.

This OC Guide has been made possible by Dollarshops.eu who provided with a
Sparkle 8800 GTS 320Mb Video Card to "play" with

Let’s discuss the tools of the trade:

Comment from MaK2000 @ 2007/05/19
I would like to ask one thing. In Riva it shows that my card moves in steps but in nMonitor it shows what I have it set to in Riva. Which one is correct?
Comment from blind_ripper @ 2007/05/19
u card clocks in steps this comes treu bios , there is a bios that fixxes this

Comment from geoffrey @ 2007/05/20
Last page there is a link attached to the EVGA bios, which enables overclocking per MHz (GTX!). You can download the latest BIOS updates at mvktech.net, though the situations that you would have to update your BIOS in order for your card to work properly are very rare.
Comment from Carni4 @ 2007/06/05
Hi guys. This is just a cheap way to keep your expensive hardware nice and cool. My temps dropped about 20°C

I use rivatuner to set the fan speed to 100% (as mentioned in the article). Secondly, I have an Antec P180B which has a HDD case in the middle. I added the 120mm fan from the bottom of the case onto it which blows cool air across my videocard.

I also added an Antec Super Cyclone blower. Which sucks hot air from the videocardcooler (videocard exhaust a lot of hot air through the slots on top of the cooler). Costs about $11,99 hardwareprice.net link

I mounted the blower 1 slot lower then the 8800. So there's 1 slot space. I tried mounting it directly under the videocard but that didnt work.
I know this blower takes up 2 pci slots, but for now I'm not going SLI anyways. When I do, I'll probably get two single slot blowers.

I think you'll get better performance/noise results by swapping the blower for a 92mm fan positioned 45°C towards the card&rear with the PCI brackets removed; those blower fans have a very bad performance/noise ratio compared to normal axial fans
Comment from geoffrey @ 2007/06/05
Nice post there Carni4, thanks you for sharing your view on improving the stock GTS cooling.
Comment from geoffrey @ 2007/06/11
Small update, watercooling market: 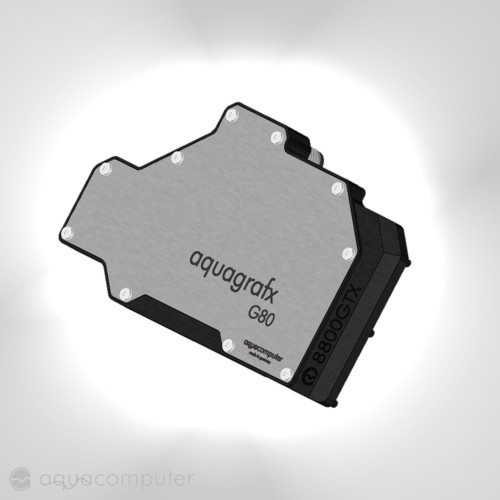 Comment from geoffrey @ 2007/10/17
Update, with new version of Rivatuner it is now possible to alter shaderclocks in windows, either linked to the core clock, or unlinked so that you never have to modify your BIOS again.

Comment from geoffrey @ 2008/01/14
Even now, manufacturers are still designing new heatsinks for G80 based videocards, look at this Arctic Cooling prototype that recently arrived at my bus:


Past year I've been researching and exploring my skills in electronics, after long time, I had gathered the following info at our secure forums:


Quote:
Comment from geoffrey @ 2008/01/14
Too bad I never found the time to test this modifications, anyway, I did dump my info on more experienced modding forums and everything seems to work like I thought. I have indicated the caps you need to be looking for, this picture is made from my G80 GTS. The GTX and Ultra might be a bit different: 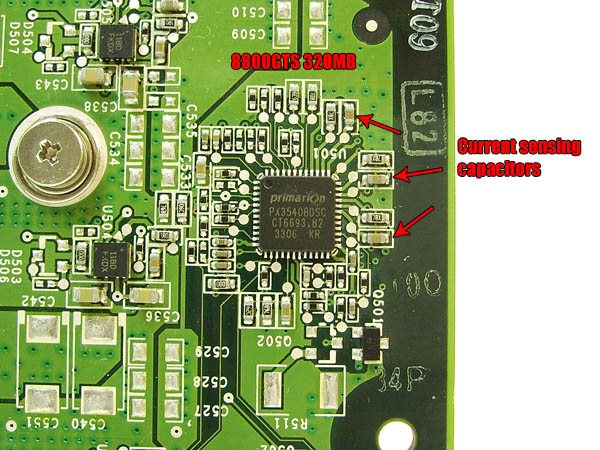 All you need to do is solder a resistor over each capacitors, you should be able to regulate OCP that way. As I said, I don't have any info on the resistor value's you should use, I never found the time to test this mod. That's why I do warn you, ONLY USE IT IF YOU ARE FAMILIAR WITH VOLTAGE MODDING, AND USE IT AT YOUR OWN RISK!

Someone over at XtremeSystems recently tried my modification, that's why I decided it's about time to release my info, have a look at his thread:

Too small value's of resistor may influence the proper functioning of the PWM IC, therefore I would use 3 50k variable resistor and tune them down until you find the sweet spot for your Over Current Protection mod.
Comment from geoffrey @ 2008/03/08
Crysis is very demanding, in one of my gaming pc's the 7950GT is no longer able to feed my CRT with high framerates, so I though about dusting off the 8800GTS again. Off course, to give this card some extra breathing space, I wanted to go with voltmods again, an excellent opportunity to test out the only modification I haven't done until now. And man...

... this really is the modification that I've been looking for all the time! I can now run 720MHz core, 1800MHz shader and 1100MHz memory clocks at the same time, GPU voltmodded to 1,45V and memory up to only 2V.

Took some fixed resistors and used the Galaxy Xtreme Tuner application to flash the videocard up to new hights, the AC Accelero Xtreme helps keeping the entire videocard at decent temperature:

I used 3 old 1kOhm resistors and soldered them in parallel with the capacitors I've mentioned above.

Water cooled, I'm currently running the 8800GTS 320MB (A2, old rev) at 760/1950/1080 through 3D Mark! With rev A3 this would mean close to 800 core I presume knowing the fact that the sample I have over here wasn't the best when it comes down to overclocking, this is all due to the modifications

Comment from JimmyJump @ 2009/11/10
I've read the tutorial with interest, but I was hoping that the G92GTS would have been included.

By the way (and you all know this, but still), ASUS provides SmartDoctor with its cards, with which you can alter the shader clock separately, alas not by much.


Anyway, I was wondering if there's a tutorial at hand for the G92GTS?
Comment from jmke @ 2009/11/10
I can recommend the latest version of Rivatuner which also support unlinked clocking; or if you like a slightly flashier version (but lose LOD tweaking and slightly lower limits): http://www.madshrimps.be/vbulletin/f...xplored-66627/
latest version available from MSI website http://event.msi.com/vga/afterburner/
Comment from JimmyJump @ 2009/11/10
Quote:
To say it with a little Meat Loaf: you took the words right out of my mouth... just downloaded RivaTuner from da Guru of 3D.

I also located the different connections on the G92 pcb, should I choose to roll-up my sleeves and unleash a bolt of lightning unto the unsuspecting device.
Anyway, should the national alarm level for small dust particles be raised, in combination with a substancial plume of smoke above the general area of 't Eilandje: no it's not the ESSO plant that has evaporated.