Protect the core of a naked CPU !

With the growing popularity of Intel mobile processors on desktop boards more and more people buy them. But these chips have an unprotected core. Installing a special cooler brings the risk of destroying the core. We’ll be taking a look on how to protect the fragile core.

On the left an Athlon 64, with heatspreader. On the right A Pentium Mobile (Dothan). Take a look further on this page how this chip will look if you're not carefully enough...

Core
The core is the heart of the cpu. Generally this isn’t bigger than about a square cm. The rest of your processor is a printed circuit board with the pins for the connections.

Heatspreader
If you've been into hardware for already some time you probably must have had the honour of installing a cpu without heatspreader.
Without what ? A heatspreader. This is a little metal; aluminium or copper piece placed on top of the core of the processor.

Why ?
The core is made out of silicium. Because the edges of the chip are very sharp and detailed finished the core can be easily crushed. By breaking miniscule parts of it you can hit essential parts. If you are lucky the chip will keep working without much hassle, but otherwise overclocking potential can be lowered or even worse, the chip can turn out to be dead.

A Dothan CPU. Marked you can see the the damage on the core. I'm very lucky because this cpu still works. 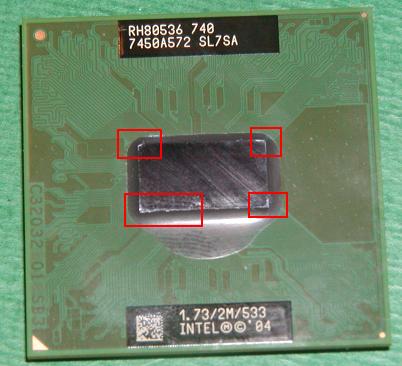 Chips that came without a heatspreader are for example the early Celeron an Pentium 3 cpu’s. All the AMD socket 462 / socket A cpu’s were naked as well. Recent cpu’s are all protected by a heatspreader. During the Athlon XP era quite some people crushed and destroyed their cpu. These hot cpu’s overclocked well with better cooling. This required a special installation and you had the risk of killing your processor even before you could play with it….

Generally speaking all mobile cpu’s come without a heatspreader. Because the cpu’s a tad lighter and thinner. And these two properties are one of the most important of a laptop.

Now that more and more people buy a Dothan or Yonah chip, you hear more and more of the incidents with the cores. In the past some special threats were possible for the cpu’s and this hasn’t changed. We’ll be discussing and testing some of these solutions today.

Comment from goingpostale1 @ 2006/06/28
Maybe an MSI Mobile Pad would fit? I don't know though I haven't had the pleasure yet of working with these chips.