Building a 300W Fan Controller from an ATX PSU

What do you if you have more than 20x high speed fans in your PC and want to control them through an easy front-end? Build your own fan controller of course! In this tutorial we show you how to convert that old 300W ATX PSU into the most powerful rheobus you have seen.

From time to time we receive some of the craziest requests in our [M]ailbox, so goes the tale about a young fellow who wanted to use up to 20 fans inside his computer. Frowning my eyebrows I did not question him further since I know this fellow has an extreme way of living, instead I went on thinking that maybe some of the older ATX PSU's I have around might proof to be of good use. Now few months later I'm ready to share with you the [M]axtreme Fan Controller, nothing but an ordinary ATX PSU.

To start with I was first thinking about using a linear type of power converting; with the LM338 you have a powerful linear regulator which can regulate 12V down to 7V without a problem. It wouldn't be too hard to build since these regulators demand very little extra components, and since the circuit is so small in size it would require less time and research for me to get the extreme fan controller done. Downside there is that when using a huge bunch of fans at 7V would set a large voltage drop over the regulator and thus forcing it to heat up quite a lot. Large current drawn will most likely force me to use 3 maybe 4 of those regulators in parallel and thus making the total circuit not only large but also harder to cool down. Plus, more heatsinks and more components to buy so the costs would increase too.

Next stop was getting one of those Velleman PSU kits, but looking on their site I noticed that they don't seem to be powerful enough for our application.

Then I remembered reading an article that explained how to make your ATX PSU output 24V. Aha, we can modify ATX PSU's right, just look at how OCZ once brought out there famous PowerStream series which allowed volt lines tweaking. I started hunting down the article which comes with a basic circuit description and in no time I saw a solution on how to make on ordinary ATX PSU into a powerful 12~0v fan controller. Between all the other electronics which have been collecting dust in my testing laboratory - aka kitchen - I took one of these noname 300W ATX PSU's I somehow had gathered over the past years, this little fellow was powerful enough and yet small in size compared with linear power supplies of the same rating.

Unfortunately, things didn't really go as easy as first thought. This article will include all the build in safety checks I had to get around, I hope some of you will understand what I'm going to explain here today, if not you still have the possibility to see the results of my experiments.

Before we go into all the technical stuff let me give you one last warning, when modifying ATX power supplies you are working with an electronic device which is at one side connected to the mains. Always be cautions with what you do and if you don't really feel comfortable with what you’re doing then I suggest rather staying away from it and letting a professional do the modifications for you. You can harm yourself pretty easily, use common sense instead!

For this how-to I used an ordinary no-name 300W ATX PSU an older generation. Grey box, nothing fancy, excellent for our modifications to test around with: 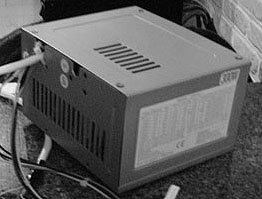 Now fasten your seatbelt, this trip will prove to be quite an adventure for most of you ->
Comment from geoffrey @ 2008/11/01
On demand, a picture which shows how the Velleman digital panel meter is configured, P3 = open, P1 = open, P2 = closed 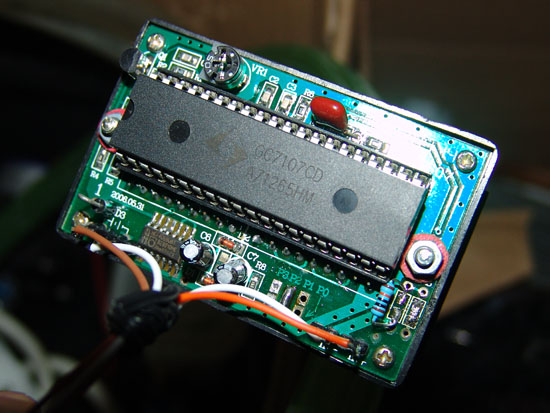 Comment from thenextgeek @ 2008/11/05
Hi there, it was me that made that request, and THANKS for helping me out, i really appreciate it. .

I have tried to hook the vIN/vOUT (your brown&white) wires to have a reading,
and I am unclear as to the proper way to do this.

(as with a Ammeter hook up, one runs a +Positive lead to one ammeter and then back out the other ammeter lead - to your device, and that works)

I have not had luck reading a steady voltage, or one that i would count as being accurate when trying to hook this LEDPM/5 Voltmeter up the same way.

Am I trying this correctly? or do i got something mixed up.. *Thanks!

(maybe if you could just tell me where you have your brown & white leads coming from your LEDPM/5 (vIN & vOUT) to/from your device? power? or ground? or both? ? ?

Thank you for taking your time to show this. .

Comment from geoffrey @ 2008/11/05
Don't forget you have to add a resistor on the circuit, you can easily spot what I'm talking about, it is on the right side of the LCD controller

Brown/white is used to read voltages on my picture. What you do is connect the two in between a potential difference. For instance you can try reading a 9V battery by connecting the VIN pin to one of the battery terminals and the VOUT pin to the other battery terminal.
You can also read the supply voltage source, you can connect brown to red and white to white and read the voltage source voltage. In my PSU I connected brown with +12V (ATX: yellow) and white with ground (ATX: black).
Comment from thenextgeek @ 2008/11/05
AhhhhhHA! I bet that's the problem, I don't have that resistor on there!

hehe, sorry so newb at this, the unit i received (locally) had no manual, (or at least one that I could read

so it has been kind of a trial and error,

THANKS a lot for taking the time, I will put a resistor on as your picture indicates it should be...

Cheers!
thenextgeek
Comment from thenextgeek @ 2008/11/06
Did you just remove (desolder) the small black square part that you put that resistor to? (#RA?) I circled it in red with an arrow for referral


Sorry I don't know the name of what that is.. I have that Resistor, but it *looks* like you removed the original part then put that resistor on?


Thanks again for all your help.

Cheers,
thenextgeek
Comment from thenextgeek @ 2008/11/11
Hey, sorry if i'm cluttering your forum here, you can feel free to delete the posts if it looks bad, not a problem...

The place you put the resistor (RA / RB) as described in the manual. .

I have put the resistor on there as yours shows, but it *looks* like you may have also cut the other circuit resistor (RB? - the other one). .


Is that so? I dont want to cut those little things, as i know i would NEVER be able to put it back on, way to small.. hehe

Ok, well thanks if you can make any suggestions, i appreciate it !

I am asking this detail, because i am getting "unstable", and usually what would appear to be "inaccurate" Voltage readings, ie; even from a fully charged 9volt batt., a DC Wall adapter (universal), etc... it dosen't seem to read, usually about 1-2 volts different, although, I can use a voltage adjuster and see the changes, they don't seem accurate enough...

afaik, i also used the correct resistor, but i'm willing to double check.. but pretty sure.


THANKS SO MUCH for your site, and your suggestions...

I talked to velleman, via email, they sent a diagram showing that RB is the one to be removed, and RA should *not* be removed (the one you have your resistor on). .

and of course the resistor/s "should" be inserted into the wholes located top and bottom on there, but I often have done it differently as well.

Anyways, I am seeing how to fix mine now.. heh

I need to put the RA resistor (the little black one) back on it... *i think*, unless there's an easier way... hopefully Radio Shack has this part or something... i dunno.

Jfyi?..
did you buy yours first hand/new? Mine was a new unit.

Thanks,
thenextgeek
Comment from geoffrey @ 2008/11/19
New one here too, yes I remember resoldering one of these SMD's, use tweezers, it's not that hard.