Gigabyte announced their new 333 lineup end of November 2009. At the 333 Event Show, however there was no word on the AMD CPU supporting motherboards. Focus was mainly on P55 and X58 series. Getting a speedy introduction to the wonders and miracles of AMD overclocking via HWBOT Country Cup I was eager to review one of Gigabyte´s latest high end offering, the 790FXTA-UD5. The A in the name reflects it is a souped up 333 version of the previous model 790FXT-UD5.

As with all AMD based motherboards, the CPU socket is not as crowded as with its Intel rivals. Gigabyte adheres to its blue PCB and blue colored cover plates on the heatsinks. A far better pro look than the older Gigabyte boards we encountered a while back. Which were a mish mash of colors that some users just plainly avoided. Yes looks are still an important buying factor, even for a motherboard. But it's getting hard to distinguish the different models as all latest Gigabyte offerings are starting to look alike. 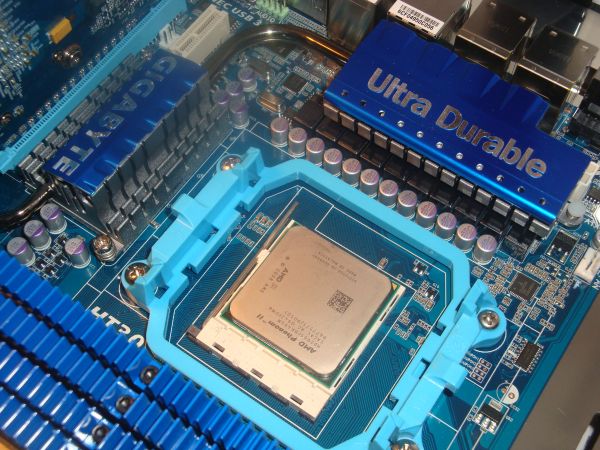 The VRM Phase design is neat and well cooled by an over dimensioned heatsink. Gigabyte also opted for a heatpipe link between the VRM, NB and SB heatsink. Most brands still link the different heatsinks. I'm not a fan of it as it makes adding aftermarket heatsinks/cooling a very expensive job. Also I prefer to isolate heat part by part and not transfer it from one component to another. The 4 Dimm DDR3 slots in the picture are crowded by a Corsair 8GB kit (CMD8GX3M411600C8). This kit is normally intended for P55 use, but we wanted to test the compatibility with AM3 too. 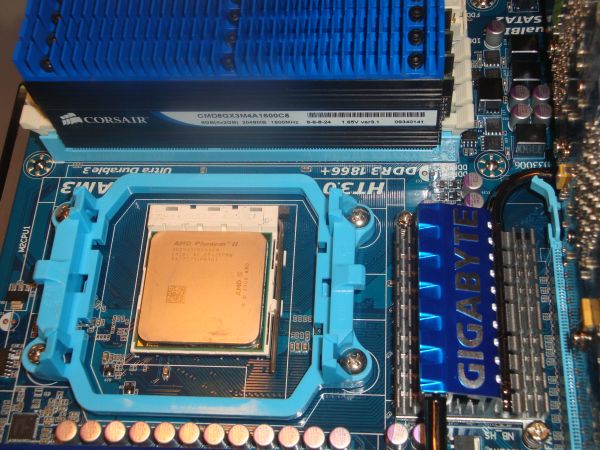 The above picture reveals that the Dimm slots are very close to the CPU socket. If you use the boxed cooler, there's no problem. With my Thermalright Ultra cooler I couldn't use the first two slots as the new bracket, to mount that cooler vertical, isn't available yet. Luckily for me Massman had a Sunbeamtech air cooler at hand, so I could use the 4 Dimm slots for the ram testing. The outer Dimm slots are harder to stabilize when pushing ram clocks as I found out the hard way. But more on that later. 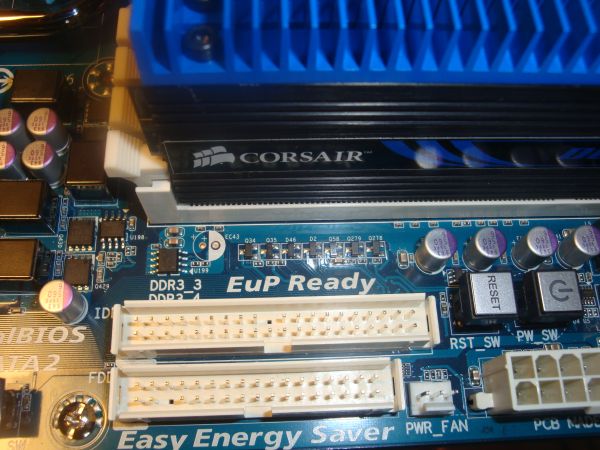 Gigabyte still provides a floppy and IDE connector. A power and Reset button are provided like on many enthusiast boards, a feast for benchers, but a bit misallocated near the 24 pin power connector. In case you would use a ram cooler, these buttons are hard to reach. Where's the Clr Cmos button you might wonder? It's placed on the other side of the IDE/Floppy connectors, just popping up above the installed graphics card. 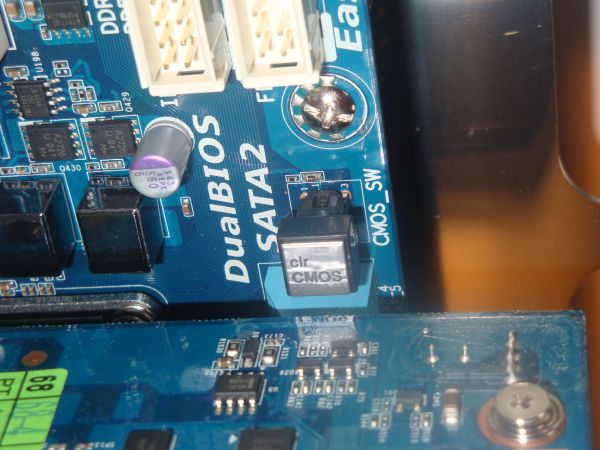 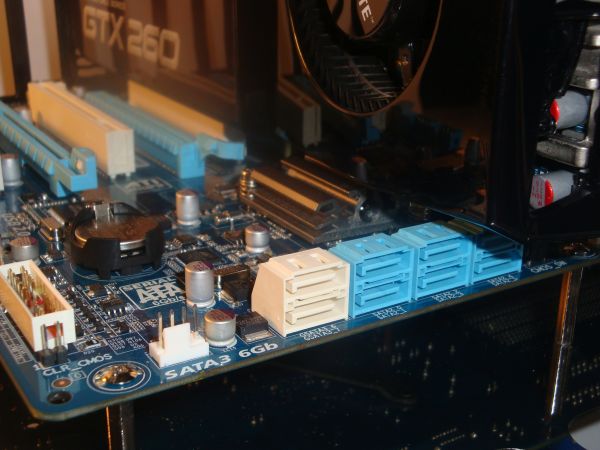 All S-ATA ports are angled so they don't interfere with any installed graphics cards. The Southbridge heatsink also is cleverly designed and seems to cool the AMD chipset properly as it barely gets warm. 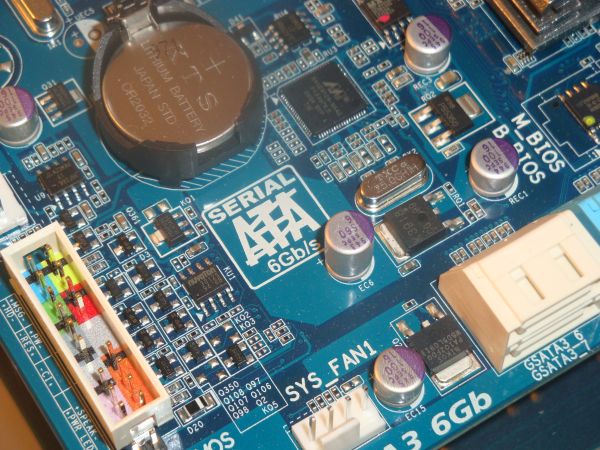 Close up of the front panel header and the Cmos battery, with the Marvel S-ATA 3.0 chip just right of it. The board has got besides the CPU fan connector, 4 more fan headers to power your case fans and co. The patented dual bios equipped helps to recover from a bad or corrupt flash. 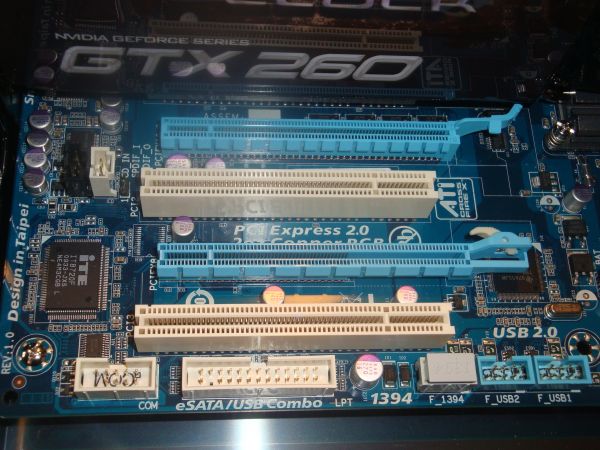 Three PCI 2.0 slots for maximum Crossfire performance. Slots however are bit close to one another. Might have been better to put the PCI slot in between the PCI 2.0 slots, thus giving the video cards more air flow. This is a general flaw we encounter many times once manufacturers implement multiple GPU slots. Three PCI slots and 1 PCI-E x1, are useable for add on cards like e.g. sound and TV tuner cards. Clearly visible too: the two USB headers, one 1394 firewire header and an LTP and Com port header (brackets and cables are optional) 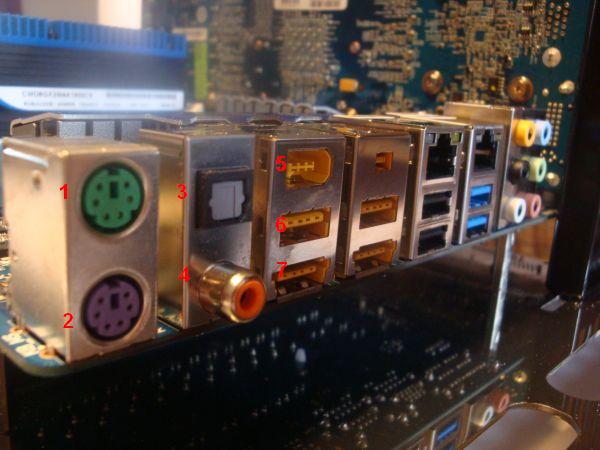 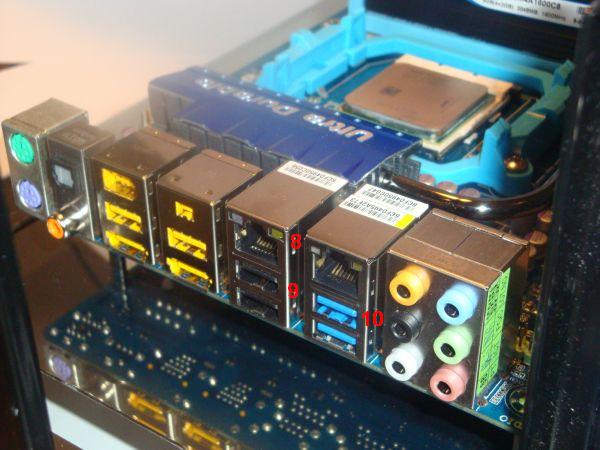