Did you know that the "I" in MSI stands for "Innovation"? Well, it doesn´t, but it should be changed, because of one reason: the MSI P45-8D Memory Lover. This motherboard features 8-dimm slot memory configuration, unseen on the mainstream desktop market. Madshrimps has a look at the performances of this motherboard in both DDR2 and DDR3 test setting comparing it to three other P45 motherboards; a 4-way P45 motherboard comparison in other words.

If someone came up to me and asked me what motherboard manufacturer launched a motherboard with eight memory sockets, I would have answered Asrock because, let's face it, they have specialised in weird motherboards and even weirder motherboard lay-outs. But no, this time I would be wrong, as it's MSI who launched the first motherboard that features 8 memory slots, 4 for DDR2 and an equal amount for DDR3 memory.

The first time I ran into this motherboard was at the MSI European Overclocking Challenge in Amsterdam, where a sample was showcased. 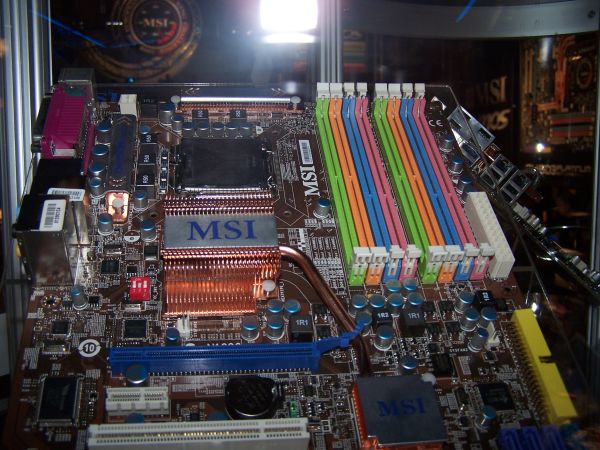 At Madshrimps, we love innovation and therefor couldn't wait for the motherboard to arrive and be tested.

As you already know, the board features both DDR2 and DDR3 memory slots. The problem is that those two cannot work in combination with each other, making it impossible to use all eight memory slots at the same time. MSI promotes this as the motherboard if you still have DDR2, but want to switch to DDR3 soon but not yet want to buy a DDR3 motherboard, which frankly is a very small part of the market. No wonders that there aren't that many samples of this motherboard. This should be seen, I think, as an attempt to show the people what MSI is capable of, to show people that MSI is not only about populating the market, but also about thinking out-of-the-box.

We'll be testing the MSI P45-8D 'Memory lover' against the other DDR2-based P45 motherboards we've tested and will have a look at the overclocking capabilities with both DDR2 and DDR3 memory.
Comment from SuAside @ 2008/10/19
interesting little piece of work. too bad about the Divider issues.

you have to wonder what they were thinking by naming it the "Memory Lover", the box art used, the color for the memory slots and then the PCB itself though...
Comment from Massman @ 2008/10/20
I presume they called it 'memory lover' because of the support of two types of memory. The box art is pretty cool, especially considering the 'lover'.

The pcb color, however, is UGLY!!