A bit late to the market, but, as always, DFI comes in with a bang. Today we have a look at the latest addition to the DFI lineup, in the form of the (ultra) high end X48-T3RS. Does it have what it takes to beat Asus et al? Read on to find out...

As a second tier motherboard manufacturer, Diamond Flower Industries, or DFI in short, does not have an easy job. Recognized by many as one of the greatest overclocking brands still standing, DFI is sandwiched between the Asusses and MSI's of this world, between a rock and a hard place one could say. While Asus is taking over much of the overclocking crowns lately, MSI, Foxconn and Gigabyte (just to name a few) are eating away in the mainstream segment, leaving only the crumbs to those that follow. DFI continues to try to do things their own way, and in doing so, they are both praised and cursed by those that use the board. With arguably the greatest bios engineer by the name of Oscar Wu still in their ranks, DFI has managed to keep its head above the water, and brings us the much praised X48 chipset in several slightly different flavors, and one rather different flavor: meet the X48-T3RS.

Now we could pretend in this review that nothing happened on November 3rd 2008, but if you're a PC enthusiast and are living on this planet, you'll probably know better. On the 3rd we were introduced to Intel's new micro-architecture of course, by the name of Nehalem. Our site was one of the lucky ones being able to bring you a review early on, but you may be prepared for the full retail launch in about two weeks time. Where does that place the X48 you might ask? In a difficult position to say the least. As an enthusiast chipset, sales will be hit hard, and this motherboard will be no different. However, as we've seen in many reviews, Nehalem isn't a replacement for all chips just yet. The highest clocked Core 2 chips, like the recently introduced E8600, overclock so well on the P45 and X48 chipsets, that there might be some life left in them after all...

As always, first a small word how DFI see themselves in the PC business:

DFI is an international IT expert based in Taiwan , with headquarters in Hsi-Chih City. DFI was established in 1981 by Mr. Y.C. Lu. Dedicated to serving customers with high technology, DFI has been earning a worldwide reputation for quality, owing much to the continuing support from our customers, suppliers and affiliates as well as our own efforts over the past twenty years. With more than 20 years of computer product development and manufacturing, our team of highly skilled engineers helps DFI position ourselves as the standard setter of price-performance solutions in the manufacturing and marketing of computer products.
DFI offers a complete line-up of advanced motherboards as well as graphics solutions and Applied Computing Platforms, to meet the expanding needs of the IT market. DFI also co-develops with Intel and 3rd party developers for the latest technology on IT solution. These relationships lead customers to adopt DFI products with confidence.
With our Headquarter in Taiwan and Regional Offices in the States, Europe, China and Japan, DFI has been stably growing from its start 20 years ago into a leader in the IT field today. Close relationships with Intel, AMD, VIA and SiS ensure that DFI products reach the market with leading timing. DFI products are built with Quality as the rock base.

We've had to say it too often the last year, but unfortunately the introduction of the T3RS is again late in comparison to the major motherboard brands. DFI has been late to the market with almost every chipset lately, a result no doubt from the high complexity of the boards they bring, together with the limited resources they are able to spend. Of course, the T3RS is more than just an average release, even for DFI. Today's board is meant to be the new flagship of their motherboard lineup, comes with all the bells and whistles and uses DFI's top "Lanparty UT" branding. More importantly, the X48-T3RS marks DFI's entry into the world of DDR3, and this is also exactly the reason why I wanted to review exactly this board. Here at Madshrimps we've only just reviewed our first DDR3 kit, and I certainly was looking for a good companion to make the DDR3 shine. I could have gone for the Asus Rampage Extreme, for example, but I'm sure you'll find plenty of ecstatic reviews on that one. No, DFI is known for its excellent memory bios, another courtesy of the great O.W., and I just couldn't wait to see what he pulled out of his hat on the first DFI DDR3 board. Let's find out, shall we...

Being DFI's flagship model, the X48-T3RS comes in an entirely new package style. For the last year, DFI has used the styling of the 680i Lanparty board for its Lanparty UT lineup, which we reviewed here. It was an extremely nice package, quite difficult to surpass. 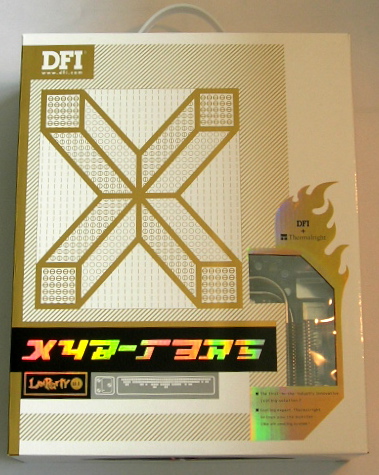 The new style is a brownish-yellow-white box, with a new and, if you ask me, quite hard to read lettering. The box brings the message across though: this is a board not to be messed with. The backside (thumb below) features a clean layout with the explanation of the most important features. Nicely done. Inside the box is the real deal of course: a blister with the motherboard, soundcard and chipset cooler, and the accessory kit.

More on all these things on the next page >

Comment from jort @ 2008/11/17
The Bernstein Audio Module sports a classic Realtek ALC885 solution, which is a bit of a shame as better solutions are available on some boards. It SUPPORTS ? 8-channel audio with all the usual connectors. Nothing special here.

As you can see however, the Module does not fit into any slot on the motherboard by itself. Instead, it features a 12-pin connector in which the supplied cable fits, while the other end of the cable goes into the motherboard of course. The benefit of this solution is the fact that you can plug the audio module in whatever expansion slot of your case you like, depending on where and how many other expansion cards you've got plugged in. The cable could have been a little longer though, as the bottom-most expansion slot was not reachable even with a completely stretched cable.
Comment from thorgal @ 2008/11/17
Quote:
What do you mean Jort ? Just saying here what DFI themselves say :?
Comment from Massman @ 2008/11/17
A typing error, I think. In the article it says 'sport'
Comment from thorgal @ 2008/11/17
Fixed

"Sports" is a possible word in this case too though

Dunno about Oskar Wu being the best engineer on this planet, but way to ground the review in history a bit by bringing up the NF7-S. I've still got mine, and I still love it