In their known style, Asrock re-invented the 680i platform by creating the only official 45nm and 3-Way SLI supporting 680i motherboard. Let´s see how this relatively cheap motherboard performs against the newer 750i platform.

ASRock Inc., established in 2002, is an energetic company with the combination of technology and humanity. Devoting efforts to bring customers the innovative and reliable motherboards with the design concept of 3C, "Creative, Considerate, Cost-effective", ASRock has successfully established a well-known leading brand of the best price-performance motherboard in the industry.

Facing the constantly changing technologies of motherboard, ASRock will always keep the vision of the future and develop future-proof products upon our 3C design concept to our customers.

It is the commitment to our customers and products, like the spirit presented in our 2004 maxim:

"Fly to the Future with ASRock!"

When Nvidia released the successor of the 680i, the biggest evolution was to go from a 16x16x8 pci-e configuration to a native 16x16x16 configuration, which was necessary to unleach the full power of 3-Way SLI. Although the 680i was not on the official support list, short after the 780i was released, people started trying out 3-Way sli on 680i as well ... and it worked without a problem. Sampsa was the first to get the 3-Way SLI working: 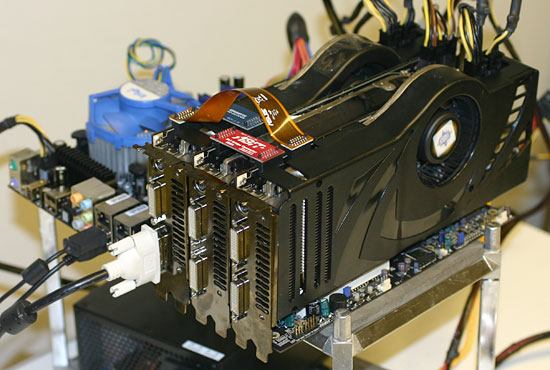 The second biggest improvement was the official support for the 45nm processors. Both Yorksfield and Wolfdale gave problems on certain 680i boards, because only certain revisions allowed 45nm to work correct. Without going to much into detail, I can tell you that it's an electrical problem. Those boards that did work with the 45nm, got a bios update to support them.

None of the manufacturers cared to re-use the 680i and produce cheaper motherboards with the official 3-Way SLI and 45nm support. None ... well Asrock did. In their known style, they tried to make the best out of the cheapest and produce the only 45nm/3-Way SLI 680i equipped motherboard.