For quite some time now, OCZ has rejoiced us with excellent PSU´s that lived up to the enthusiast´s demands. Let´s have a look now if the latest sibling from their PSU stable can fulfill our ever growing hunger for power, and if it can better some of the other units that are currently on the market...

Every enthusiast knows by now that Power Supply Units or PSU's in short, have gained a significant amount of importance the last couple of years. The reason for this is simple: the increasing power demands in PC systems have raised the bar significantly on the quality of PSU's : they have to deliver more clean and stable power, and lots of it as well.

A couple of years ago, 400-500W power supplies were considered heavy (and expensive) PSU's, and they were in fact only catered towards the enthusiast community. Meanwhile, Intel brought forward their Prescott and Smithfield CPU's, while ATI and nVidia were easily doubling their power requirements with every "next generation" graphics processor. The race towards more power for the CPU's may have cooled down a little now, but not so in the graphics department. nVidia is claiming a minimum of 400W of power lately, and we're talking single graphics cards here. ATI is claiming 300W for its upcoming R600 powerhorse on its own, so there goes that trustworthy 400W "enthusiast" PSU you bought a couple of years ago... No really, when you want to be on top of things, you need at least a 600W-700W PSU nowadays... And if you want to stay ahead of things, let's say for that shiny new $1200 Crossifre R600 setup you can't get any sleep over, well, we've got some good news : the market is booming today with 900W+ PSU's that should be able to bring down that powerplant in your neighborhood quite quickly.

It really does not come as a surprise than, that all the major "enthusiast" manufacturers have jumped on this high performance PSU bandwagon, and all try to get their piece of the cake. Corsair and Mushkin have only recently entered the PSU market, to join others like Enermax, Tagan, Sharkoon, Antec and let's not forget Silverstone and OCZ of course. Most of these manufacturers, or should I call them suppliers, buy their PSU's at a couple of well known dedicated PSU manufacturers, like Etasis, Fortron (FSP), Seasonic or 3Y-Power. Many other companies just rebrand their PSU with their own name, which doesn't make them bad of course. Only a couple of manufacturers, like Zippy or PC Power & Cooling, still use their own design of PSU, with great success as well one might say...

Out of the different enthusiast brands, OCZ has been working on PSU's for some time now and with enormous success. Strangely enough, OCZ did not offer a very high performance PSU as quick as some of the other manufacturers did. This has changed at the beginning of 2007, with the inclusion of their first 1kW power supply, which is the one we're looking at today. Let's take a look at OCZ's most powerful power supply unit : the 1000W ProXstream series, nicknamed OCZ1000PXS.

First, let's have a look at the package of this "big boy": 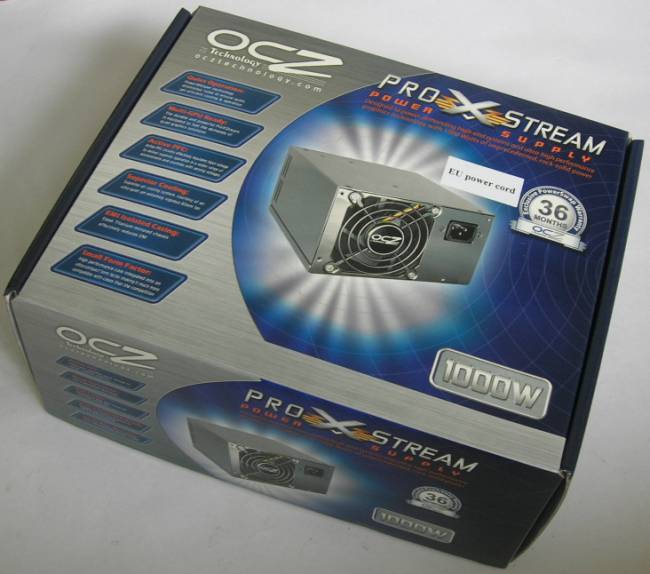 The OCZ comes in a nice, small box, which is the exact same size as all of their previous PSU boxes. As always the box is cramped on the inside with the PSU and all the cables that are attached to it. One of the big truths in life is the fact that the outside box is no guarantee for the inside, positive or negative. Whereas the Powerstream box was home to a PSU which was quite long for its time, this box contains what is claimed to be the smallest 1 kW power supply on the market. The packaging in the box has perhaps suffered a tiny bit from cost cuts that are omnipresent. The thickness and quality of the bubble plastic that surrounds the unit is a far cry from the quality that protected the PowerStream series, but then again : the unit arrived in perfect shape here so what am I talking about anyway...

Some more views of the OCZ ProXstream Box - click to open

Before we move on, for all those that have lived on another planet lately, a word on OCZ as a company:

OCZ is one of the premier manufacturers of memory modules, and one of the biggest players on the international market. OCZ technology was founded in 2000 and has established quite a name for producing high end ram products, especially among the enthusiast community. Since early 2004, OCZ also produces high-end power supplies, and at the beginning of 2007, nVidia Graphic Cards were added, starting with their flag ship model, the 8800GTX. In 2007, OCZ will also put a new focus on cooling products, by introducing some water-cooling products and best of all, a new phase change unit. For the time being though, memory remains the most important branch in OCZ's product catalogue, closely followed by the PSU branch. For many products, OCZ has received praise from reviewers around the world, and we can only hope that they continue their efforts in the future, and with this product here today.

Let's unwrap things and have a look at what's inside the box: 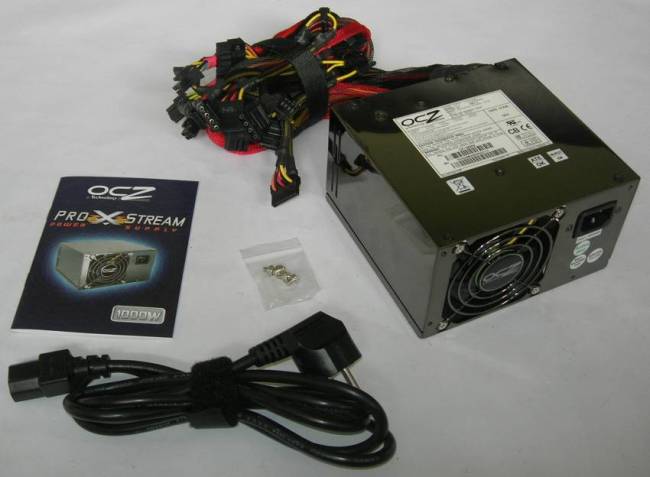 Included in the box are: