For quite some time now, OCZ has rejoiced us with excellent PSU´s that lived up to the enthusiast´s demands. Let´s have a look now if the latest sibling from their PSU stable can fulfill our ever growing hunger for power, and if it can better some of the other units that are currently on the market...

Let's have a look at the PSU itself now. First thing that comes to mind when you look at the ProXstream is "all that power in such a tiny unit". OCZ claim indeed that this is the smallest 1 kW unit available. This unit fits perfectly within the standard ATX envelope, and as such the unit is only 14cm long. As far as I know, all other 1000W+ PSU's need more room inside their casing and are a little longer. The Silverstone Zeus I had lying around, and which we'll include in our test bed later on, measures about 3cm longer than the OCZ unit. The older PowerStream versions also were a couple of cm longer, the GameXstream series is exactly the same size (but less powerful of course). Anyway, the standard ATX size means you can use this PSU in every case that follows the ATX specifications, and that would be about every case on the market.

Compared to the GameXstream series, OCZ decided to change the finish of the unit again. Instead of the matte black of the GameXstream, OCZ went for the shiny grey-brown look of the previous generation PowerStream. The finish allows for much more finger prints to be visible, and seems to be more scratch sensitive. On the other hand I guess it looks a little more "classy" now. I'll leave it up to you whether you like the looks of this one better than the GameXstream. 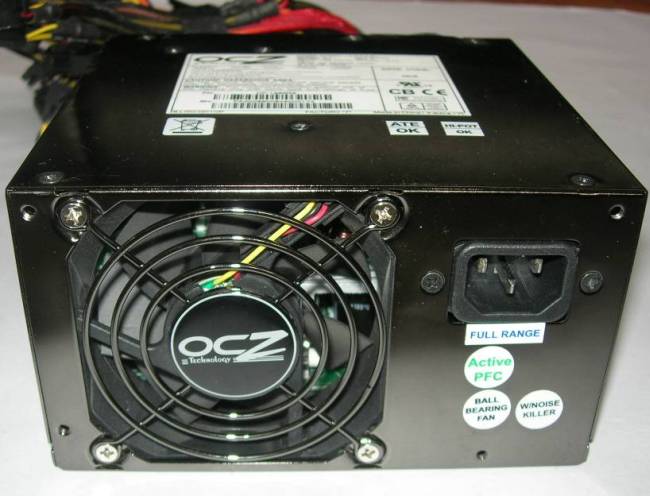 "outside" view of the ProXstream PSU

Another change is the cooling design of the unit. Instead of the 120mm fan of the GameXstream, or the double green or blue 80mm fans we found in the PowerStream series, we're now greeted by a single 80mm fan without any LED. This no nonsense, no fanfare look is exactly what I like in a computer product, but you might disagree of course. The single 80mm fan in such a powerful product makes you wonder why other PSU's need two or three 80mm fans for less power...

One additional feature, or should I say lack thereof, that is quite obvious from the above picture is the absence of an on/off switch on the unit. This means that from the minute you plug in the power cord, your motherboard will have power transferred to it. This actually gave me a bit of a scare the first time as the PC just started the minute I plugged the power in. However harmless this item is for your PC or PSU, it does mean your PC is constantly eating a little power. To be honest, it doesn't feel quite "right" to me, and this omission is actually the only thing about the exterior design of the PSU that I really regret.

Last but not least, the entire cable system is sleeved, and I have a feeling the sleeving is of slightly better quality than with the GameXstream. I especially like the different (red) color for the PCIe cables which make finding them a lot easier. I would even like to make a pledge to OCZ to extend the use of colors on the sleeving even further: that way you can immediately find the right cable for the right application. Overall, the entire finish of the PSU and its cabling is excellent.

side, back and top views, the bundle of cables, specification sticker - click to open

A bunch of cables

A modern PSU needs an entire assembly of different cables and connectors, and the OCZ ProXstream delivers plenty. The only thing I do find a bit odd is the lack of news about the new PCIe connectors, the ones that reportedly will be present on the new ATI R600 graphics cards. Until now, I haven't seen any PSU that comes with the new connector(s). I guess ATI will have to provide the power adapters, but these would better be avoided where possible (if only for their looks). Then again, it's pretty possible that ATI will change the power connectors anyway upon launch of the R600 products.

Back to the unit at hand, OCZ provides the following cable system with their ProXstream: