A warrior with no master. A case with no equal. Ronin combines a dark, stealthy design with enhanced hardware compatibility for a chassis built for vengeance, a small extract of what BitFenix has to say about today's reviewed Ronin mid tower case. Very aggressive PR material, but that's the way we got used too. Strong and bold claims, however the case has to live up to the hype created around it. Let us pop the box and discover what the Ronin is really made of...

First a small word bout the BitFenix company: BitFenix has entered the enclosure market about two years back. Some of the Bitfenix founders were some of Cooler Masters ex engineers. Maybe they were limited in their creativity and thus started their own case company. But enough of the gossip , here's what we find abot the company and it's ideas :

For a while now, many members of the BitFenix team have had some great ideas for products, and for one reason or another, have been unable to convince the powers that be to take a chance. Well, with Bitfenix, we finally have the ability to sidestep a bunch of red tape and bring to the market products that truly "break the mould."

Now, being different is one thing, but being useful is another. A lot of the time, companies tack on gimmicks and other useless features to their products to try to stand out. Well, we don’t want to be different just for the sake of being different. Instead, we want to make products that actually enhance the computing experience; mere flash won’t be good enough.

So how will we accomplish this? How will we be able to come up with so many ideas? Are we some sort of geniuses? Not at all. While experience can really help to bring a product to market, sometimes you really have to think “outside the box” to come up with innovative ideas. The way we will come up with products is simply to be as close to the community as possible. We want to be accessible and have plenty of channels for gamers and enthusiasts to tell us what it is they really want from their hardware. There are many ways to follow what is going on at BitFenix:

Back to the star of today, the Ronin enclosure. A warrior with no master. A case with no equal. Ronin combines a dark, stealthy design with enhanced hardware compatibility for a chassis built for vengeance. Micro-mesh strips provide additional ventilation, while the large window side panel with innovative Stealth Cover enables you to simultaneously show off the hardware you want and hideaway the parts you don't. To keep things frosty, Ronin can be outfitted with up to five fans, or a top-mounted 240mm water cooling radiator for superb cooling potential. Install up to six HDDs or SSDs inside the included FlexCage™, or slide out the middle section to make room for even the longest graphics cards. Equipped with a bevy of DIY friendly features and signature BitFenix SofTouch™ Surface Treatment, Ronin vanquishes your opponents in style. 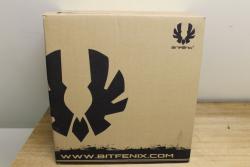 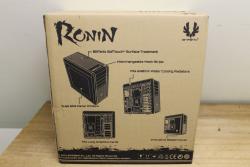 Since most of the BitFenix cases are retailing at a very affordable price tag, a cardboard box with no frills was expected. It's the chassis, protected for heavy duty transport that counts! And it's quite a great looking case, sporting a big windowed side panel to show off your installed components. 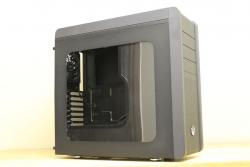 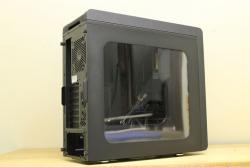 The attention to detail is high with a fine micro mesh on the front and top panel. Once the side panel is removed we discover another one of the peculiarities of the BitFenix Ronin case: a removable cover , baptized Stealth Cover plate, hides your storage devices and keeps the power supply and storage cables out of sight. Removing the Stealth Cover requires some force, of course it's not something you will remove a dozen times once your build is completed. 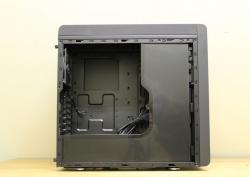 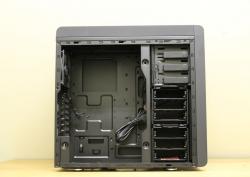 Storage wise, up to three optical devices can be installed. Plus two hard drive cages with each 3 x HDD/SSD trays can be stuffed with your favourite storage devices. The top HDD cage is removable to allow maximum compatibility with ultra long graphics cards up to 420mm. With both cages installed, graphic cards up to 310mm can be installed. Cooling wise processor coolers up to 170mm height are supported. 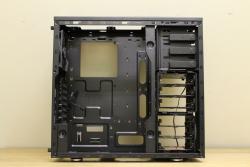 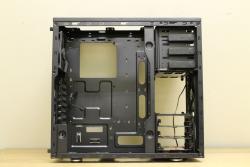 The processor cut-out is spacious; however the others are mysteriously under-dimensioned in reference to other cases we have tested. Cable routing is still possible though slightly larger cut-outs would facilitate things for sure. Rubber grommets are not included; the Stealth Cover has to show its functionality here.