Have you just put together your brand new gaming monster but are you still missing the equivalent strong power supply to match it. In this article we're putting the Coolermaster Silent Pro Gold 700W power supply unit against Corsairs Professional Series Gold AX750. Two quality build 80+ Gold power supplies in the ~700W market segment, did we get double Gold?

The first 80+ Gold power supply units have been around for a while now and more 80+ Gold models  are being added each month so it seems. As the market slowly is being filled up with new gear we noticed that these top notch Gold rated units have now reached new territory: the 700 Watt market share. It still is the high-end equipment which many of you probable can only dream off, however if you’re the very power demanding kind of person then these products might be of some interest to you. The truth is that you’ll quickly be spending 120~150 Euros or an equivalent amount of dollars on one of these 700W units, money which could also be spend buying an 800~900W power supply  as well. The thing is that for anyone with an overclocked air/watercooled computer using a dual/quad or even hexa-core cpu with SLI/CrossFire video cards, the 700W will cut if for you, it’s only for the very few which run quadSli/Cf and Prometeia cooled quadcores which might be really needing the higher wattage rated models. In return for choosing the 700W Gold units you mostly get higher build quality and guaranteed higher efficiency which translates into lower electricity bills. Interesting? Ok then, let’s have a quick look at both of today’s competitors. 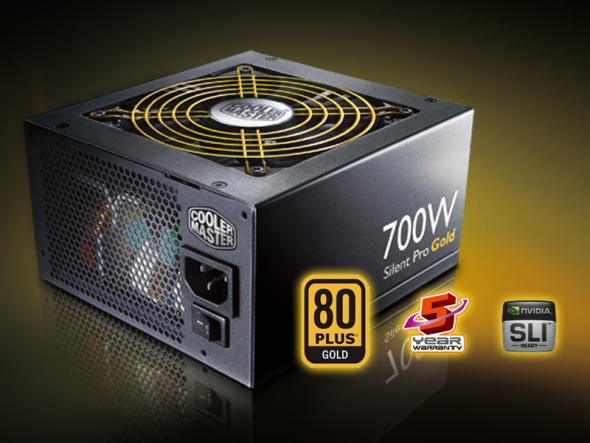 Ranging from the ever-efficient 600W all the way up to the 1200W power supply, the Silent Pro Gold line meets the 80Plus Gold Standard. And to achieve this goal, Cooler Master incorporates three visionary patents into this innovative design. The Hybrid Transformer incorporates the transformer with the heat sink, not only reducing the size by 25% over traditional transformers, but by keenly conducting heat and increasing efficiency. The Heat Transfer Technology crafted especially for powerful, demanding power units utilizes and L-shaped design to ingeniously route air flow by the heat sink, resulting in greater heat dissipation and therefore providing an optimal performance. The Hyper Path adeptly places the integrated circuits tightly to the transformers, shortening the path and creating a more direct energy channel, reducing the energy loss to nearly nothing. 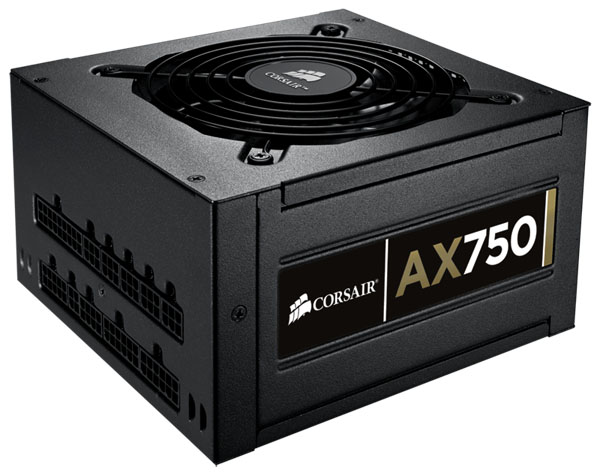 The Corsair AX750's energy-efficient design allows it to operate reliably with minimal cooling, and hence very low noise levels. The AX750's Hybrid Silent Fan Control technology offers three modes of cooling, depending on the load level. This includes a fanless mode of operation (0 rpm) up to about 20% load, a quiet, low fan speed cooling mode for typical loads up to around 50% load, and a higher performance cooling mode for more demanding loads. Corsair bundles this element with more traditional features like integrated active PFC with PWN controller, a large cooling fan, and a powerful single 12V rail in order to engage maximum performance.

Enough electrical mumble jumble for now, let's first give the product box some attention and see if there are any goodies to find in there.