SATA 6Gbps will provide speeds up to 6Gbps (around 600MB/s when overhead is taken into account) and is fully compatible with earlier revisions and uses the same connectors like we know from earlier SATA revisions.

For now nor Intel or AMD have integrated SATA 6Gbps in their chipsets so we have to rely on an extra chip. In this case the Marvell 9128. Gigabyte supplied us with a P55A-UD6 motherboard and a Seagate Barracuda XT with SATA 6Gbps interface for testing.
To test the performance of the drive we use 3 benchmarks, Crystal DiskMark, HD Tune Pro and Attobench. We compared the scores with the same drive connected to the Intel controller. 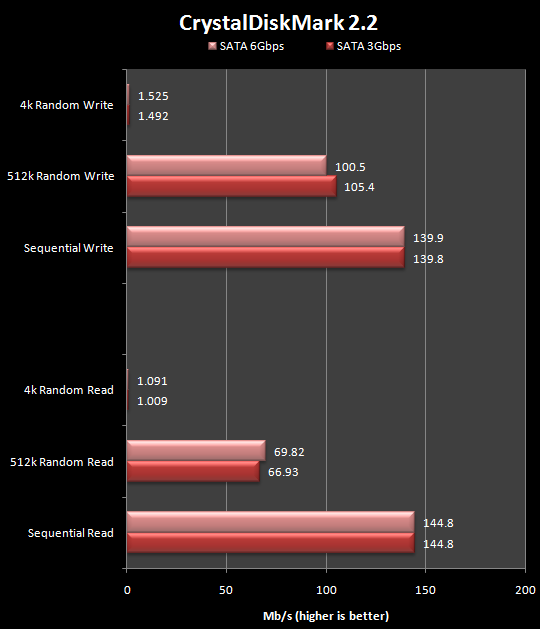 When we look at the differences between the tests we see they are almost non-existant. The hard drive is capable of reaching speeds up to 144MB/s. Not bad for a mechanical hard drive, but based on this benchmark there is not really a need for faster SATA interface. 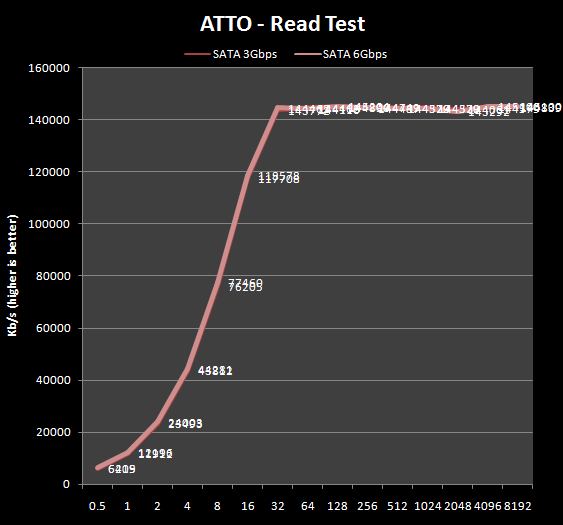 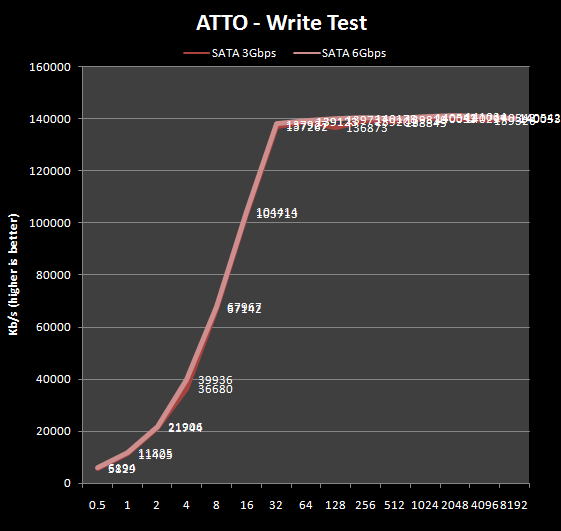 The same is true for the Atto Disk Benchmark tests. Comparing SATA 6Gbps to SATA 3Gbps, the first seems to outperform on read speeds, albeit slightly, but the difference is not more than a few MB/s. 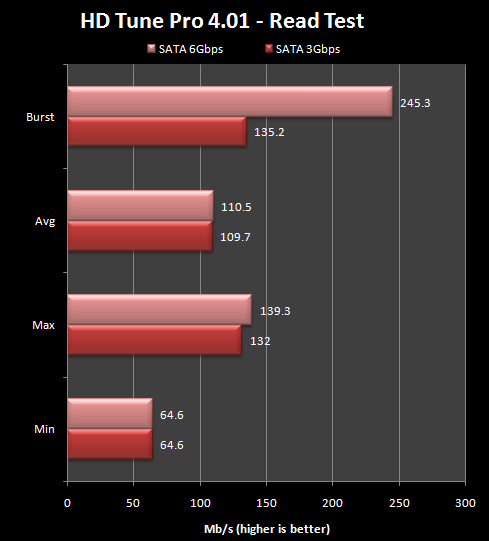 When looking at the read speeds in HD Tune Pro we see a slightly better performance with the SATA 6Gbps controller in the first part of the test compared to the SATA 3Gbps. On this controller there is about 7 MB/s extra performance when compared to the SATA 3Gbps controller. The minimum speeds stays the same, as well as the access time that is comparable. The average is only slightly higher, due to the similar performance for the most of the test.
Comment from FireTech @ 2010/02/08
Did I miss something?
The SATA 6Gb interface was tested with a normal rotational HDD and concluded it was pointless for those drives - sorry but I think we could have guessed that outcome.
Why not test with fast SSD drives instead and then see if they can tax the interface?
Comment from jmke @ 2010/02/08
how many SATA 6Gbps SSDs are there?

Comment from FireTech @ 2010/02/08
Sorry, it's like trying to break the 300Mph barrier using a BMW M3 when there's a Bugatti Veyron available.
Neither will break the the barrier but one will be a whole lot closer to it

Comment from leeghoofd @ 2010/02/08
I think it's clear like you mentioned that even a S-ATA 3 normal HD will be a waste of cash ( till now) bettr to go for newer SSD to unlock the potential of S-ATA 3... the tests show indeed that the limit has been reached for rotational drives... maybe we will see some interesting products at CEBIT
Comment from TERW_DAN @ 2010/02/08
Offcourse this outcome was to be expected. But since there are no 6Gbps SATA SSDs available at this moment, we wanted to taak a look how usefull this technology is when you want to buy a new motherboard today. With the Barracuda XT 2TB currently being the only 6Gbps drive available commercially this was the only drive to test it with.
When 6Gbps SATA SSDs will become available, I would like to give those a test to see if 6Gbps is usefull for those drives.
Comment from jmke @ 2010/02/08
Quote:
there is ONE

I don't know why Seagate released a HDD with Sata 6GBps interface, that makes no sense
Comment from Kougar @ 2010/02/08
Quote:
One. Micron RealSSD C300

Quite a few SSD's would have broken SATA 3Gbps limitation on Reads though, so I have to agree on Firetech on this one. Unless SATA 6Gbps doesn't allow offloading of the interface overhead, in which case it wouldn't matter. But that's also something to test for...

Comment from TERW_DAN @ 2010/02/08
Hopefully I'll have the chance of testing those, to see if SATA 6Gbps is usefull for an SATA 3Gbps SSD and in what rate the 6Gbps SATA is usefull for a SATA 6Gbps SSD.
Comment from jmke @ 2010/02/08
an SSD with SATA 3G will perform max up to spec of SATA 3G, even when plugged into SATA 6G connector; would be illogical if it did perform better