With a Big Bang we Maximus test a few SuperComputer motherboards based around the P55 chipset for our next LanParty rig. Compared to the previous 3 models this roundup provides you with in-depth test results of 7 Intel P55 mainboards from MSI, Asus, Gigabyte and DFI.

When I started writing the introduction for this lengthy article, we were still a month away from the release of the Clarkdale, which is the 32nm successor of the not-so-popular Lynnfield. This core will also make use of the LGA1156 platform and be compatible with the current high-end P55 motherboards, so I had actually planned to run all the tests with a Clarkdale processor. However, due to NDA restrictions (something I tend to stick to) I couldn't find a proper balance between waiting 'till the official release and promises made to all the lovely PR contacts, we went ahead using the Core i5 750 again. This is the exact same sample which we've also used for the initial P55 launch article and the first three-way P55 mainboard round-up, today we add 4 more samples: 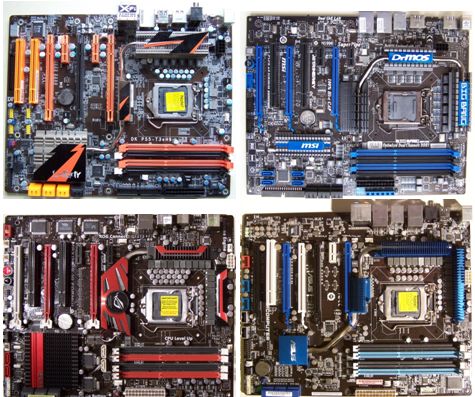 So, what has changed in P55-land over the past months? Sadly enough, there's nothing much to tell. Most main boards perform equal to each other, so the end-user has a choice between several products. The processors still don't overclock that fabulous; in fact, the overclocking results pretty much remind me of the first couple of months of Bloomfield overclocking: 5GHz stable with 4 cores and 8 threads through 3DMark Vantage is quite a difficult task, even with LN2. In addition to this, there's also the burned socket syndrome, which has been leading its own life now as all vendors have changed revision or socket manufacturer at this point.

What strikes me the most, probably, is the amount of different P55 mainboards available ... if my counting is correct about 80! According to HWBOT.org, the P55 platform isn't nearly as popular as the X58-based parts: only 1700-ish benchmark scores have been submit to the database whereas 30,000 X58's. Do note that there are only 60-ish X58 products available. This makes me believe, or rather: hope, that the mainboard vendors are really positive about the upcoming Clarkdale technology. However ... in some way this doesn't make sense, since for Clarkdale H55/H57 chipsets are required to get the most out of the CPU and the IGP.

Let's have a look at the four new mainboards we've been testing in-depth over the last month.