Here we are again, with some brand new water blocks to cool your Nehalem or Lynnfield monster CPU. We got some strong contenders this time, which will give the blocks, that we already tested, a serious run for their money. In total 7 new blocks delivered to us thanks to Aquatuning. We compare performance to 6 blocks we previously tested. Find out which one cools your CPU the best!

Here we are again, with some brand new water blocks to cool your Nehalem or Lynnfield monster CPU. We got some strong contenders this time, which will give the blocks, that we already tested, a serious run for their money. Last roundup was really lacking most of the Europe fabricated blocks. This time we got them in the lab, due to the big effort done by the guys from Aquatuning. Gathering samples is not easy these days, as many of our mail requests go unreplied. So a big kudos to the manufacturers that already shipped their blocks for the previous I7 Roundup Part 1

Let's get that fluid flowing.

Alphacool, based in Germany is a well known and respected brand in Europe. Alphacool's headquarters and main production facilities are based in Braunschweig.

This block is the result of combining the proven design of the NexXxos XP X² Highflow and the XP Bold Cooler. Due to a high flow rate ( up to 4.7 liters/min) the block ensures good performance on Intel and AMD CPU's. The block in its current design is compatible to all Intel sockets (S775/1366 and the new I5 1156 socket). The AMD version is fully compatible with all the known AMD socket designs known to mankind. 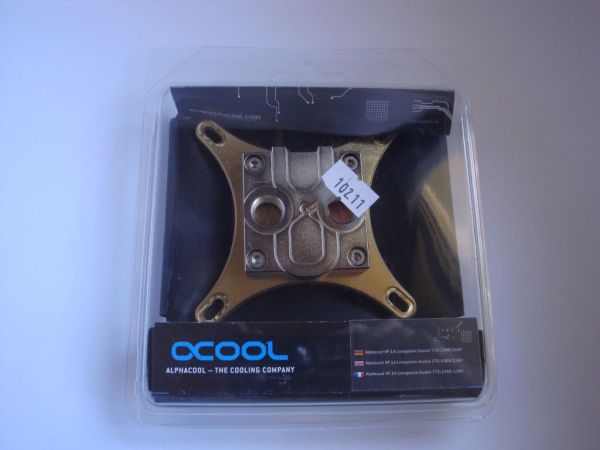 This block was based on the interiors of the NexXos X² blocks, while the exterior was derived from the XP and Bold blocks from Alphacool. Weighing 404 grams this is not a lightweight at all. The all massive metal nickel coated top and bulletproof mounting plate are responsible for its elevated Body Mass Index. 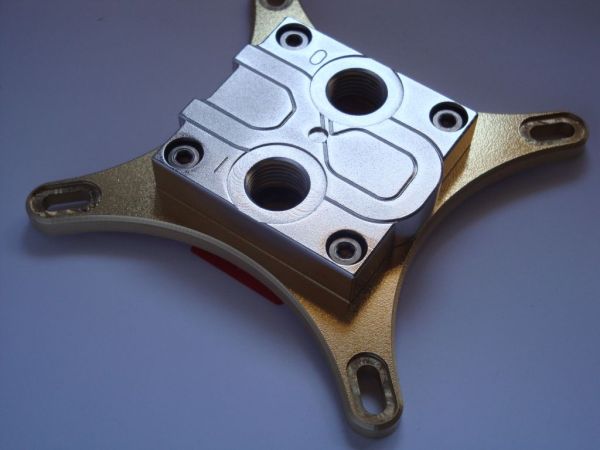 Isn’t she pretty? Look at that massive mount and top block, if ever ya PC should fall of the table, I'm pretty sure the block will be intact while the rest of hardware might be shattered all over the floor. 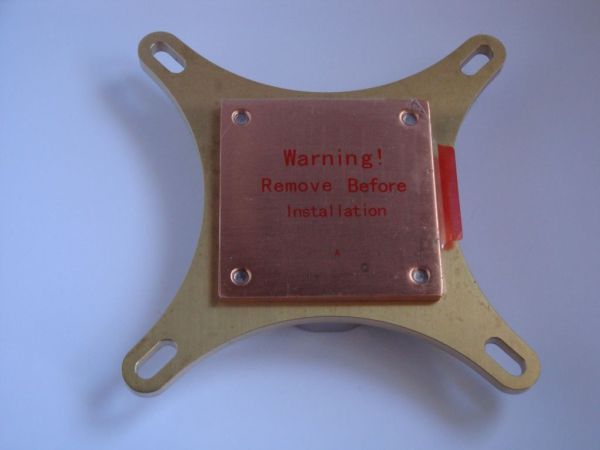 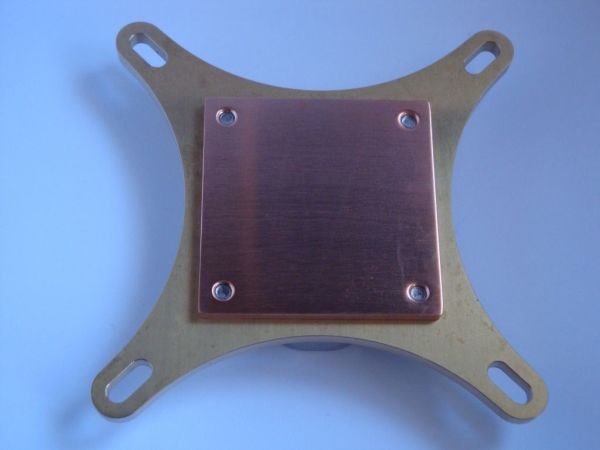 Base is smooth; some might have expected or preferred a polished surface. It's a known fact however, that the latter does not warrant a performance advantage over the rawer version. 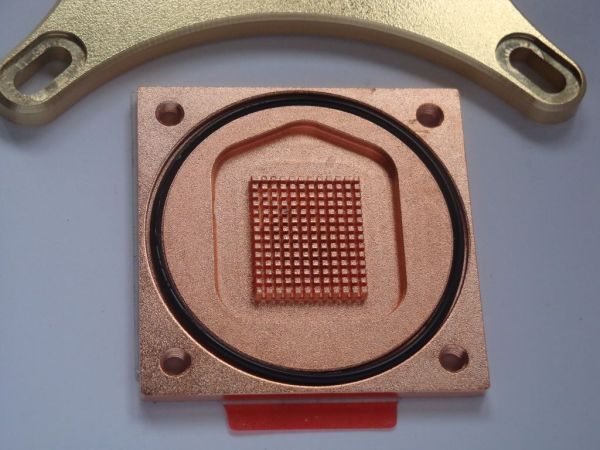 The mounting plate also acts as the diffuser for the incoming fluid... Most modern blocks use a separate jet-plate for that purpose. Alphacool went here for 53 tiny venture inspired jets. If this nice craftsmanship still works on modern CPU's, that's another question. 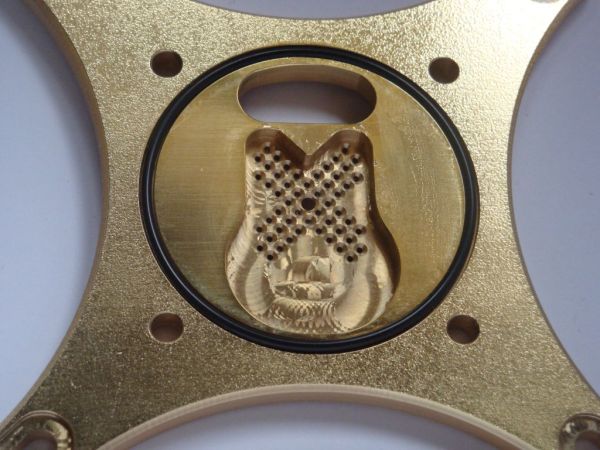 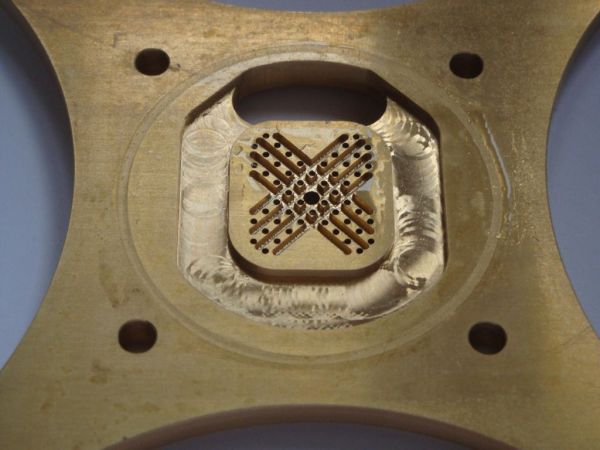 The mounting mechanism is based on the well known and most common used screw, spring, washer and nut mechanism. No back plate, nor fittings in the box. Only a small tube of thermal grease is added as accessory. 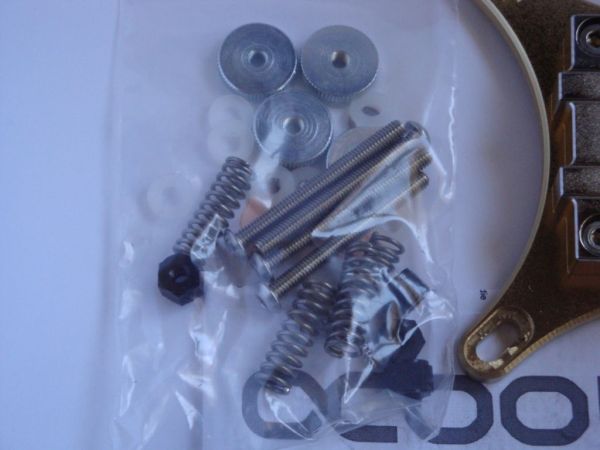 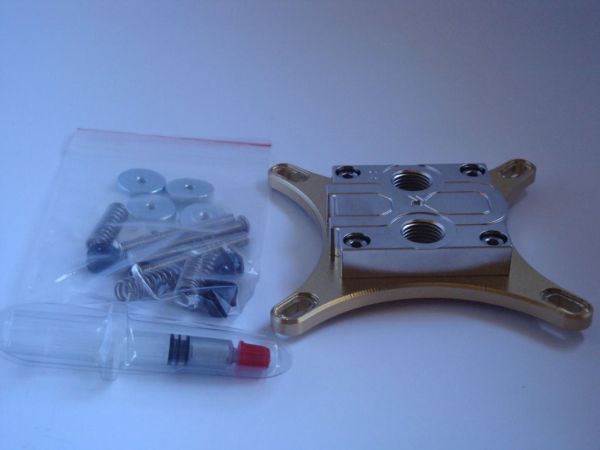 Livingstone mounted and ready to handle some bucket loads of heat... 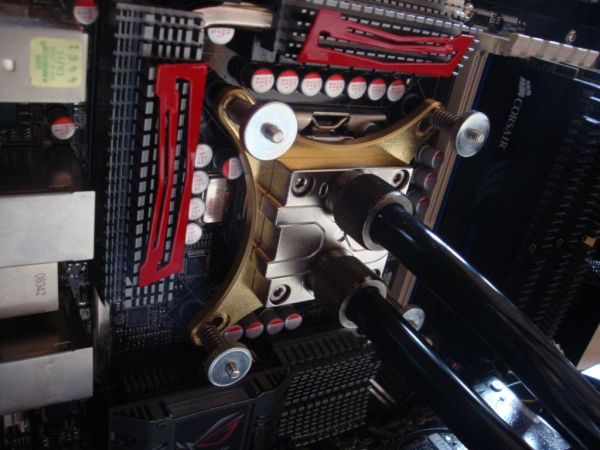 Must have been hard work benching so many blocks... and doing them all again just due to change of thermal paste. Thorough to say the least...

Though I am new to watercooling this is the only article I have found that tests this many waterblocks. This will sure help me in buying the right block for me.

None the less. Just felt like after all that hard work you deserved at least one thank you

And I hope that you will expand this article over time so that it could be a big buyers guide almost... Covering as many waterblocks with real tested data as possible? Or does this exist already? Would be a major way for madshrimps to become even more unique?
Comment from jmke @ 2009/10/28
hi there, the author and tester Leeghoofd definitely deserves some praise for his hard work I agree

I don't know his exact plans when it comes to water blocks as he's learning along the way, but I would not rule out a standardized test setup on which to test a multitude of blocks.

For reference, here's another trustworthy source with some quality blocks compared http://vapor.skinneelabs.com/i7/Roun...i7Overall.html
Comment from leeghoofd @ 2009/10/28
Thx Seth for the nice comment, I try to keep the roundups as simple as possible. The link from Jmke is the expert style, with flow charts and stuff... that's for the real die hards. Note also that they test with dual and triple pumps to get really the last degree out of the blocks. I prefer to stick to one popular pump to keep things understandable... and a sort of more european setup...

Here's a suggestion for a test-rig, ready to use and manufactured by some experts: the CoolerMaster Testbench
Comment from leeghoofd @ 2009/10/31
Dimastech test bench arrived on friday (pictures will follow soon