At Computex 2017, Be Quiet introduced to the press an upcoming addition to their Silent Loop AIO series, the 360 model, featuring as you could have guessed a massive 360 radiator. The new flagship should top the cooling performance of the 240 and even the 280 model. Be Quiet has received many awards over the last decade and has established itself as one of the market leaders in quiet, yet powerful power supplies and processor cooling gear. Especially their Silent Wings fan series are loved by watercooling purists as these fans feature an excellent combination between airflow/pressure and silent operation. Time to open the box Be Quiet send to the MadShrimps lab. We were keen to test the new 360 Silent Loop version.

I have to start off with a small word on these Silent Loop AIO series: Be Quiet has teamed up with another German watercooling manufacturer, known by the name of Alphacool. The latter has been producing all sorts of water cooling products; the range goes from processor to high end full block graphic cards, in-house designed radiators, to pumps and even tubing. Alphacool has developed AIO products in the past for Cooler Master and Fractal Design, though the co-op with Cooler Master wasn't that successful. The pump unit was way too noisy especially with the early revisions of the Cooler Master Eisberg series. Powerful is one thing, silent operation is another side of the story. The Fractal Design AIO Kelvin series was a better step in the right direction: good cooling performance at an acceptable noise level. Even while our two Kelvin review samples are still up and running, we heard rumors about reliability issues, so fingers crossed that these brand new Be Quiet Silent loop series can live up to the expectations and maintain to operate reliable too.

As mentioned in the introduction, Be Quiet has upped the range with their brand new AIO Silent Loop 360, sporting a  thick 360 copper radiator and of course now using triple 120 Quiet Pure Wings fans.

Due to the usage of a full copper radiator there is no risk of corrosion nor oxidation and algae stands no chance.  When using different alloys in a closed loop, things could get messy, so by using copper all-round this has been excluded with the Silent Loop series. Secondly the heat dissipation of copper is also a little superior than the cheaper aluminum variants. The Draw back is a steeper production prize. 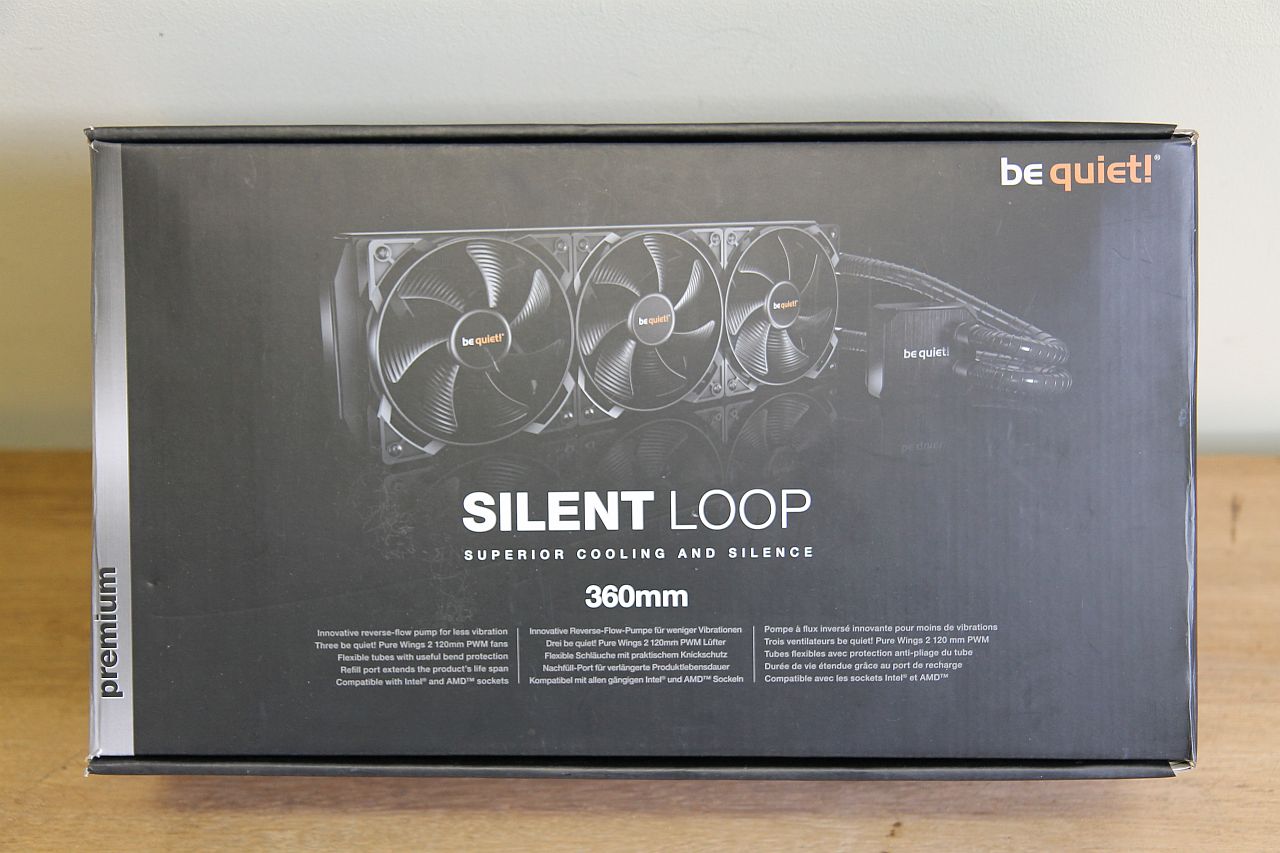 Also a standard is that Be Quiet never goes cheap on their packaging: they really want to outline that the hardware you buy from them is top notch, not just what is on the inside counts. Superior, premium are just a few of them word catchers on the box, they really seem to mean business. 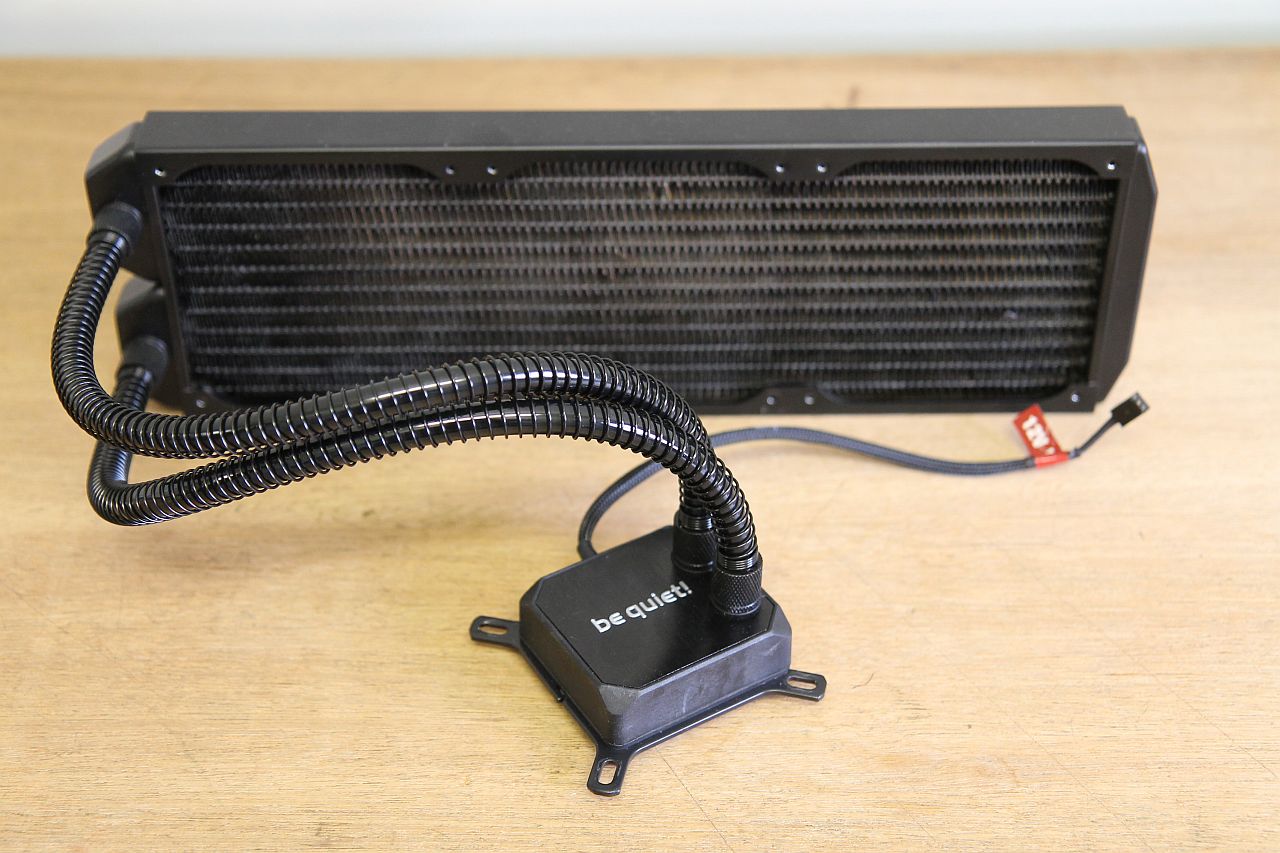 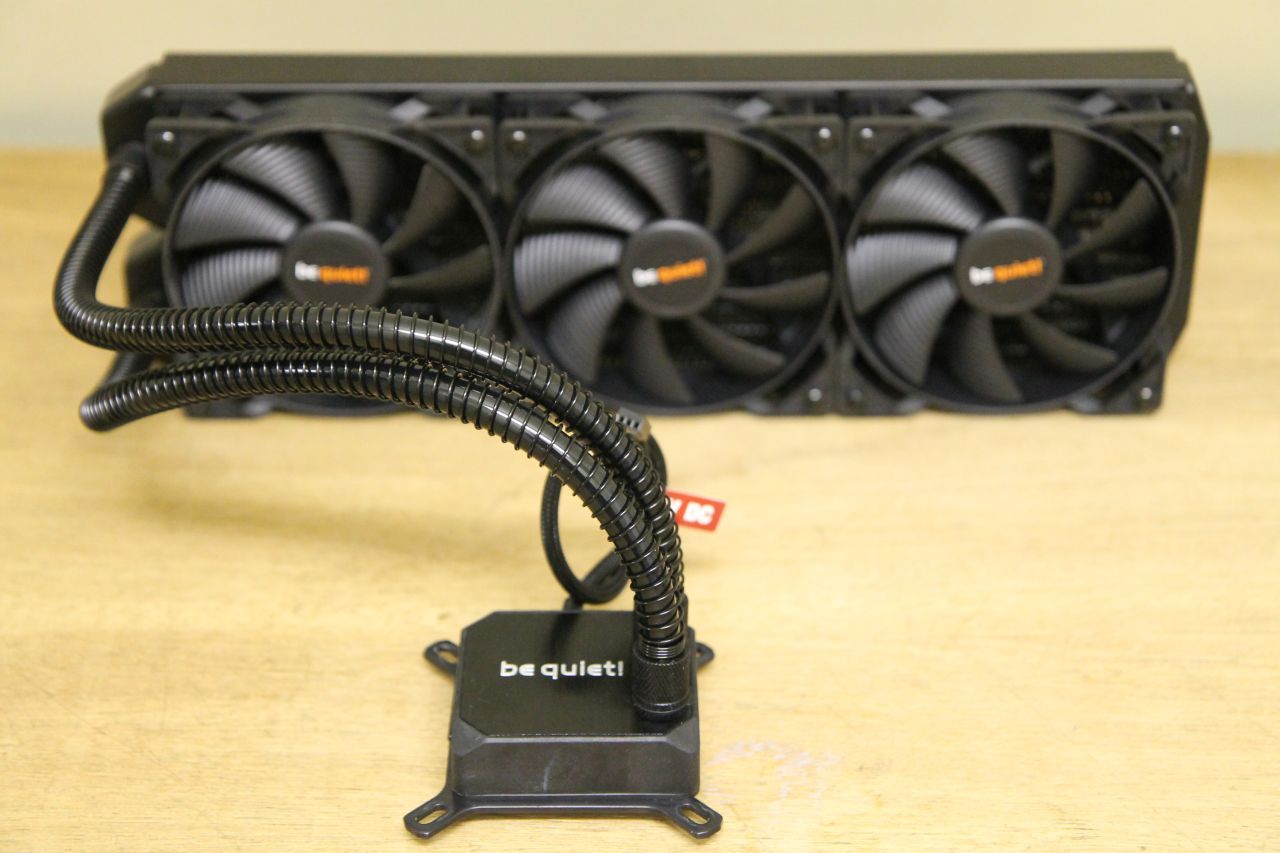 A quick comparison between radiator size between the 240 and Silent Loop 360 model:

In fact that is the only difference between the 240 and 360 model, the radiator dimensions. All the other components are identical in specs, besides the additional 3rd 120 Pure Wings fan. 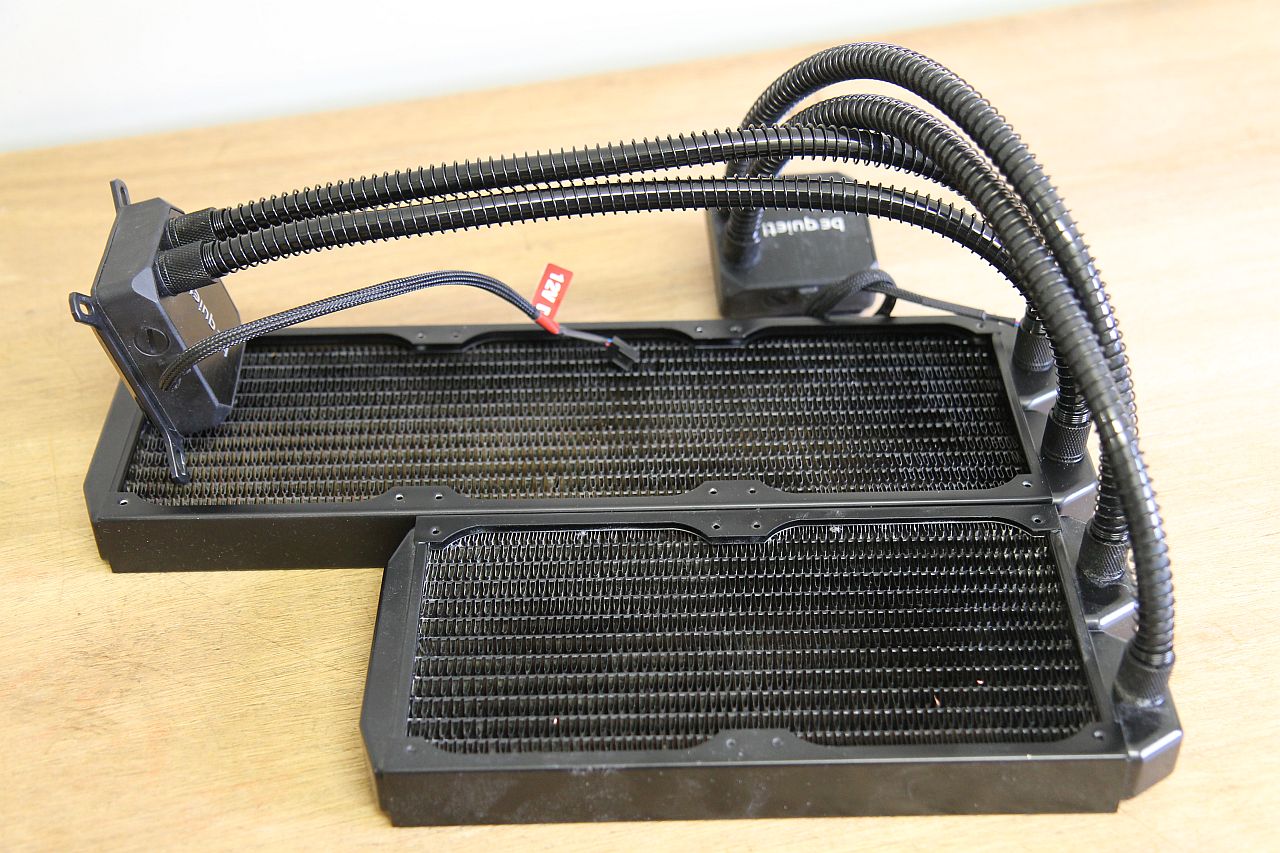 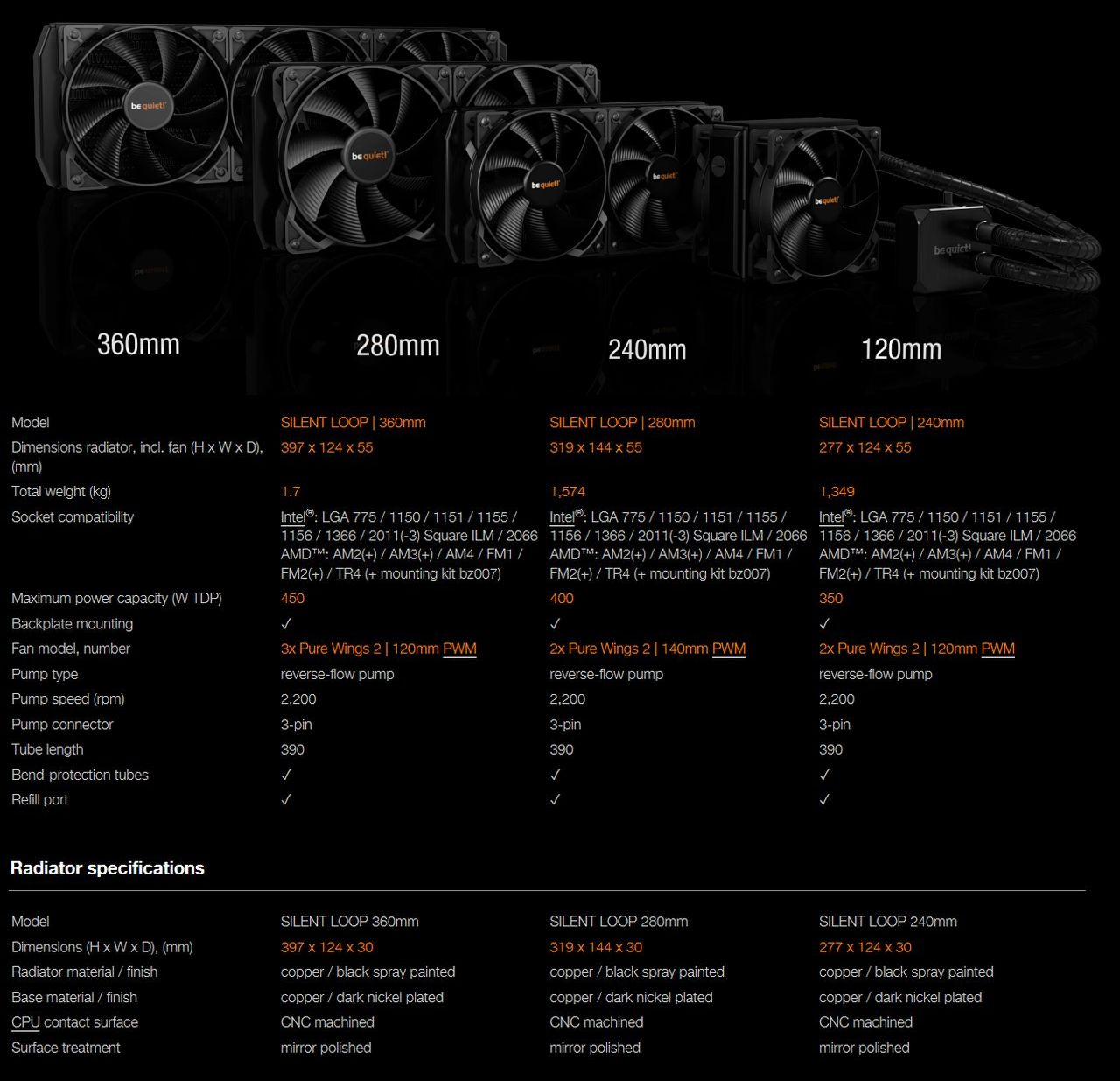