In a few weeks you can find a brand new Intel CPU at your local hardware shop, it still carries the Core name but it is drastically different compared to their previous Core 2 units. The Core i7 has an onboard memory controller and hyperthreading is re-introduced. We compare the performance of the entry level 920 model as well as the high end 965 XE.

Most of the changes were already mentioned in the introduction. But aside of all the processor changes, there is also a new chipset. the Intel X58. Currently the only one that can work with a QPI interface.

The Intel X58 (Codenamed Tylersburg) is a desktop computer I/O Hub from Intel to be formally released in November 2008 in conjunction with the Core i7. It supports processors that use the QuickPath Architecture, and is the first I/O Hub to support the the Intel QuickPath interface used by these processors. It is incompatible with all previous Intel processors. Supported processors implement the Nehalem microarchitecture and therefore have integrated memory controllers, so the X58 does not have a memory interface. 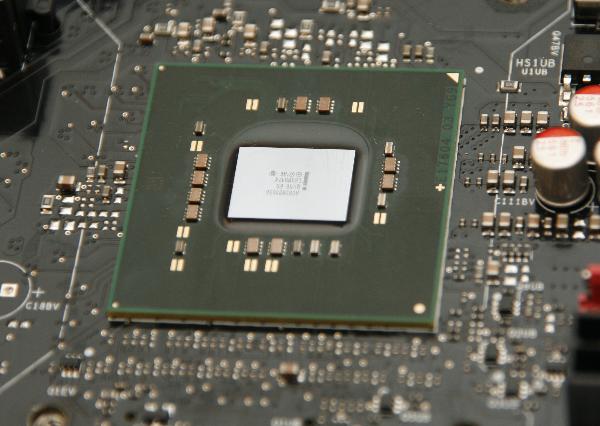 A view on the naked X58 chipset.

The QuickPath architecture differs considerably from earlier Intel architectures, and is much closer to the architecure used with AMD systems that implement Hypertransport. As a result the role of the X58 is not directly comparable with the role of any particular component in earlier Intel architectures. On a single-socket motherboard, the role of the X58 is somewhat similar to the "MCH" (northbridge): it communicates with the processor via a highspeed interconnect, it communicates with the southbridge via a DMI interface, and it communicates with highspeed peripherals via PCI-E. However, the X58 is not a Memory controller hub (MCH) since it has no memory interface. Intel's use of the term "I/O hub" for the X58 adds futher confusion, since this term has traditionally been used to refer to the southbridge member of the chipset, while the X58 is more nearly a northbridge.

X58 board manufacturers will be able to build SLI-compatible Intel chipset boards by submitting their designs to Nvidia for validation. However, users wishing to run more than two Nvidia video cards in PCIe x16 will still need to purchase motherboards equipped with one or more Nvidia nForce chipsets. It is still possible to run more than two video cards in an SLI-configuration at fewer PCIe lane widths. The X58 chipset itself supports up to 36 PCI-Express 2.0 lanes, so it is possible to have two PCIe x16 slots and one PCIe x4 slot on the same motherboard.

A new socket brings a new mounting and brings new coolers. There surely will come some new coolers in the very near future, but a lot of manufacturers can and will continue using their older designs, and adapt the mounting. Such as the Thermalright Ultra Extreme.

Also Intel has some new coolers: 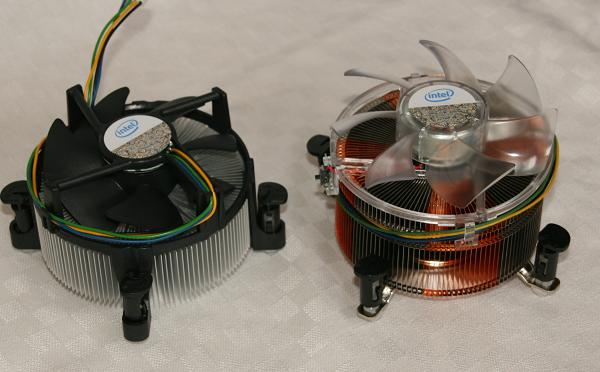 On the left the i7 920 boxed cooler, and on the right the i7 965 XE cooler. The last one has blue led’s build in, and a switch to that you can override automatic fan speed and let it turn at maximum speed all the time. 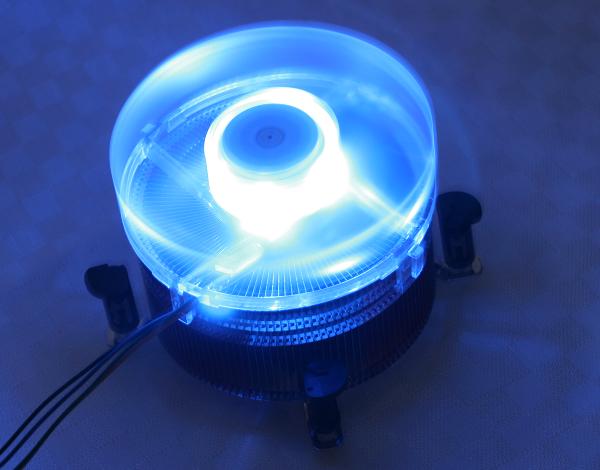 On to the first third party mainboard, the Asus P6T deluxe. >>>