Watercooling.de has had design and manufacturing input in several water blocks they\'ve sold online over the past five years. My first introduction to German engineered water blocks was through this store when I tested the original CF1 Microstructure block and later with the “upgrade kit” compared it to popular USA system Dangr Den TDX vs. CF1 Rev.2. Watercooling.de\'s recent arrival has already received high praise from other testers, so today I test the new SUB-ZERO ExodusFlow Altauna, will it earn my “Brass O-Ring”?

Introduction and Differences between US <> EU WC

This online shop has been providing Europe with some of the very best German engineered water blocks for over five years. My first introduction to German engineered water blocks was through this store when I reviewed the original CF1 Microstructure block and later with the "upgrade" kit compared it to popular USA system Danger Den TDX vs. CF1 Rev.2. In addition to all the water cooling kit the store offers a wide selection of PC-hardware.

Let’s take a few moments to examine the differences between Euro and USA H20-cooling. 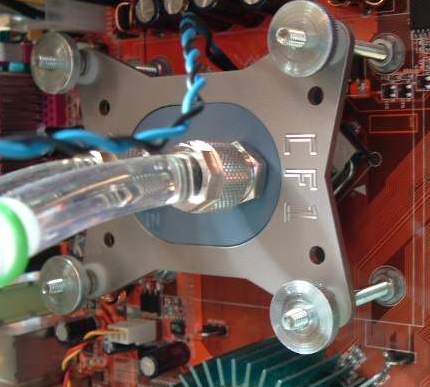 I realized rather quickly a water-cooling system based on 1/4" or 10mm tubing offered many advantages. These attributes went beyond ergonomic appeal such as ease of installation and minimal clutter. With 1/2" systems tubing is cumbersome, difficult to manage and based on a poorly conceived connection system, a propensity for leaks. Unfortunately 1/2” systems utilize barbs on each component over which the tubing is stretched and then fastened with plastic fasteners. Once pressurized 1/2" tubes become very heavy and in some cases the slightest twist or tension can dislodge the tube at the connector. If you were to query more experienced water-cooling Enthusiasts, you'll discover most eschew included hardware and they replace it with stainless steel "worm drive" hose clamps as shown below: 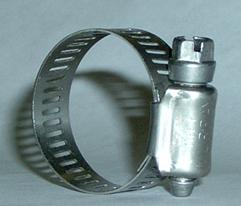 In contrast 10mm lines insert into their perspective connectors either locking into an O-ring or sliding over a small barb over which a metal collar is tightened down. This design is practically leak-proof and can withstand much more wear and tear than its 1/2" counterpart. At the very least water-cooling experts should be including a version of the stainless hose clamps with their kits. Many makers such as Swiftech are now using slightly thinner walled tubing which has the flow rate of 1/2" without the bulk. Die hard supporters of 1/2" system rebuttal remains; "larger tubes = greater flow = lower temps." This is a generalization which needs qualifying and we won't debate that here, suffice to say the CF1 out-performed several top performing 1/2-ID based blocks. 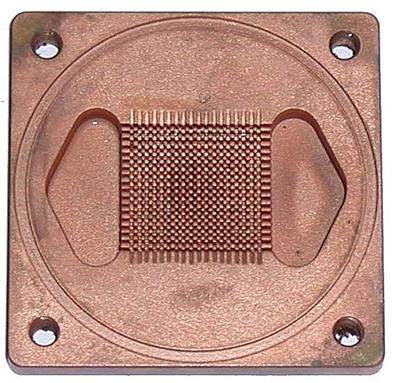 The original CF1 much like the new Sub-Zero begins with a 0.5mm thick copper base; however this is where the two blocks differ as the CF1 utilizes an extruded pin design. Sub-Zero improves on this design replacing the micro-pin with a cross flow channel design. With micro-pins flow-rate is essential and I've tested some blocks where an increase in flow rate actually resulted in higher temps. In the Sub-Zero channels with sharp angles are machines into the base plate which effectively creates a "cross-flow" design. Such a design can benefit from higher flow-rates. This is where base-plate thickness plays an important role. Unlike air-cooling in which the copper mass needs to be large enough to accommodate more surface area, within a water block the coolant is the catalyst attracting heat through that base. A thicker base equates to mass which is counterproductive, the best analogy might be to think of Direct-Die water-cooling.

Besides thickness the CF1 base plate was unique because of its minimal footprint, something I came to appreciate for its thermodynamic benefits, the simplest being the coolant is concentrated right where it needs to be. The block has a Derlin (PTFE) core containing threads for inlet/outlet connectors and below the inlet a copper plat is seated. The plate has any small holes drilled through it to force the water into mini-jets, seen below. 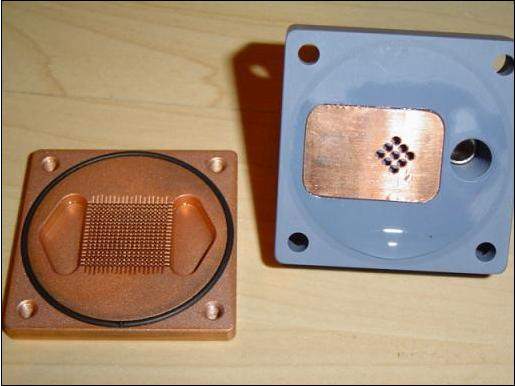 The CF1 remains a classic although relatively unknown in the USA. Shortly after the CF1 was cooling Socket-A and 478 CPUs the world over, an "improvement" was released. This introduced the CF1 Rev.2 which I reviewed in my article Danger Den TDX CF1 V.2 comparing both blocks using the same pump, 1/2-ID tubing and radiator. I used a 1/2-ID to 10mm adapter for the CF1, which doesn't replicate flow through the block as it was intended, however; it's the closest one can get to eliminating variables. Below we compare the major change made from CF1 to Rev.2 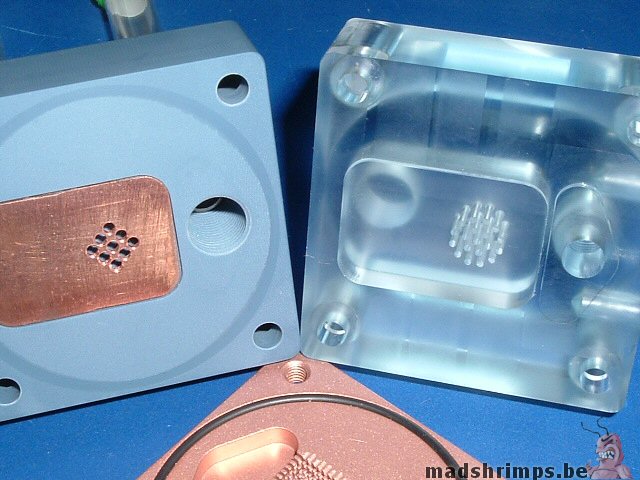 The CF1 Rev2 wasn't my favorite because it eschewed the copper inlet plate for a Lucite center with threading for connectors and then small holes drilled to replicate the mini-jet effect the copper plate once performed. It was an obvious cost cutting method as the block became more popular; Lucite is less expensive then copper and Derlin. The CF1 Rev.2 changes served the maker rather then the end-user although they did try to improve ergonomics drilling a receptacle in the Lucite to accept a LED. 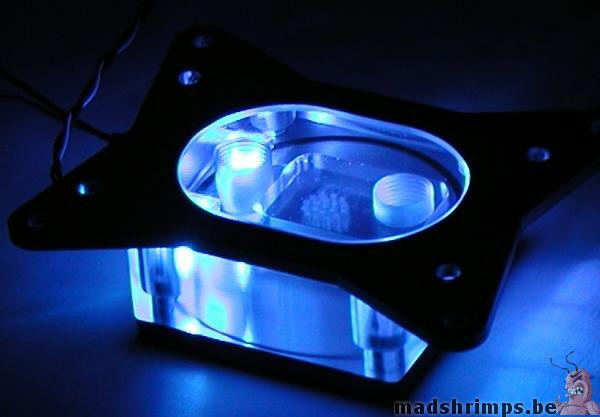 The Sub-Zero is a different breed of 10mm animal ->