Describing any review involving PC Power & Cooling products is more difficult then one might think. How do you describe a company to which so many accolades have already been attributed? Today we have the honor of testing the Turbo-Cool 1000W (1kW) PSU.

Changes in the Industry
It really wasn't until recently the Power Supply ceased to be the least understood and neglected components in desktop computers, into one of the most integral components. It was the culmination of several events which juxtaposed that role from a device where system builders commonly cut costs, into a device which could have deleterious effects on overall system performance. This became more evident with the overclocking movement and high-end gaming. One of the earliest events which began to change the PSU's role in the modern PC was the transition of the CPU power source from 3.3V and 5V-Rails to the 12V-Rail. Around the time 12V rail/s became the CPU power source, Intel's Net Burst architecture had been producing some of the most inefficient desktop CPU's the industry had ever seen. To use another Moore's Law / astronomy analogy, these proverbial "Red Giants" were rapidly on their way to the "White Dwarf" stage as Dual Core technology was introduced. As Moore's Law states in it's die-shrink / heat analogy, these processors were on the way to generating as much heat per square mm as the surface of our Sun.

All kidding aside, long before Intel's Dual Core Prescott doppelganger known as Smithfield arrived, Santa Clara's first foray into the 90nm process was creating it's own set of problems. These had been further exasberated by a premature release onto the Socket-478 platform. Specific problems associated with Prescott's release to the 478 platform can be found in [H]ardOCP articles; Prescott 2.8E overclock and Prescott Tweaks Dangerous. Ironically, many of the same motherboard power circuit problems which plagued Prescott also plagued it's dual core sibling later. As power demands continued to rise with the advent of SLI and Crossfire they were limited by the infamous ATX12V Power Supply Design Guide 2.01 and largely misunderstood EPS12V Power Supply Design Guide 2.91. As we approach another power pinnacle with ATI's R520 and the NVIDIA G70, 12VDC demands are at an all time high, leaving the consumer confused as to how much power they need and if their PSU should be multi- or single-rail.

So what has this to do with PCPower&Cooling? In an industry where it seems the bottom line is constantly sinking lower and dragging along business ethics with it, PCPower has remained true to their original ideal, to build the best PSU on the market. As an industry leader PCPower has not only challenged the 12VDC Guidelines, they've also brought some awareness to PSU specs which are purposely misused. On March 20th, 2006 PCPower&Cooling published their own Certification Program, putting any PSU purchased from the company through an additional series of tests which go beyond what PCPower already offers. An example of a test report can be viewed here. It is doubtful many companies could match the criteria PCPower demand of their own products. Their quality control standards are perhaps some of the tightest in the industry. For a small fee one can have their specific unit tested and receive a hard copy of those tests. 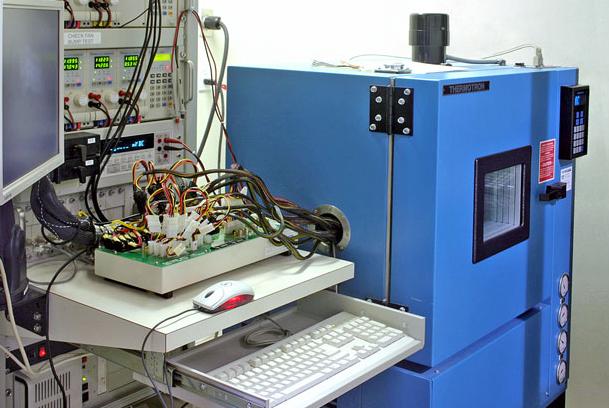 Now more then ever we need to understand and trust the power supply we are investing in, yet the average consumer isn't armed with a manual to dispel PSU myths. How can we decipher marketing fodder disguised as specifications intended to inflate the performance of a mediocre product? PCPower responded by offering the certification report mentioned above and has included several sections at their site so that we can understand how terminology can be manipulated to benefit a product. Take a few moments to read: Power Supply Myths Exposed. In addition to 12VDC Guidelines mentioned above, the PSU industry is currently in a state of transition and the consumer pays the ultimate price. Hopefully I've succeeded in explaining what is common among most power supply manufacturers products. Let us take a look into a refreshingly uncommon product. 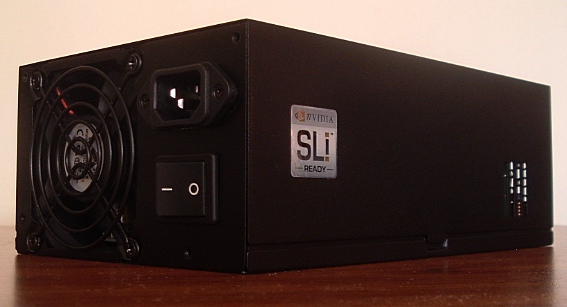 Our TC1KW is the "vanilla" model dressed in powder black and exuding the PCPower pragmatic yet powerful presence. There are no overload or temp warning LEDs and external potentiometers have been left out. PCPower's philosophy on this matter being; "Build it right and they will come." Or rather, build it right and you won’t need a light on the back to tell you your system is re-booting due to anemic Rails. Insofar as external Pot's and other features, PCPower will customize any model they sell. Take a gander at their Specials/Price list. There you will find a list of refurbished models. Many of these have external Pots and other accouterments. 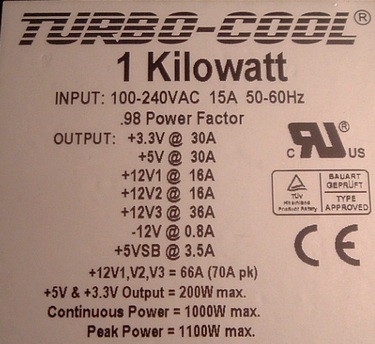