While Intel and AMD and frantically working to keep power usage down of their recent and upcoming CPUs, we see video card taking the top power gobbling spot, two high end ATI X1900 cards in Crossfire will bring most modest power supplies to their knees. You need a sufficiently powerful unit if you plan to overclock your system, this Silverstone 750W PSU is silent and powerful, but is it enough? Let?s find out

Seven hundred and fifty watts, that?s the total amount of power this unit can deliver, Silverstone has partnered with Etasis to bring a silent, powerful and affordable PSU to the masses. But I hear you say: with Intel releasing Core 2 and Pentium D ?power guzzlers? leaving the scene, do we even needs such high rated PSU in our systems?

While you are correct that on the CPU front we are being given a break, it?s now the video cards which take the top spot, with multi GPU configurations and high power chips like the ones on ATI?s X1900 series the need for a powerful PSU is still here. And once you start overclocking the total power consumed might be quite an eye opener. 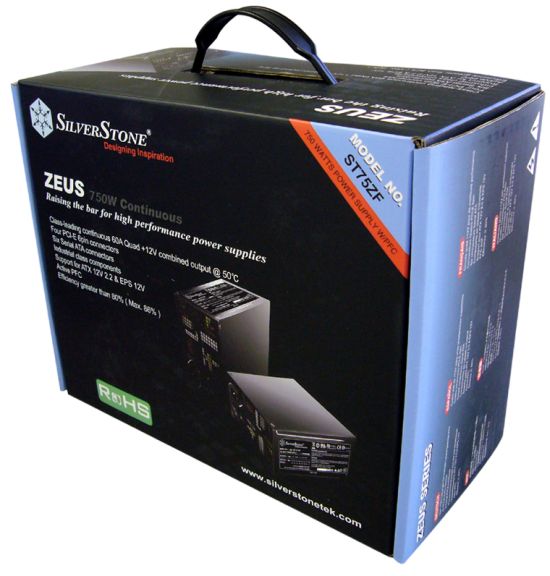 The Zeus 750W unit from Silverstone boasts promising specifications, is quite light weight, features only a single 80mm low-noise fan and comes painted in black.

Four separate 12v lines might not be the ideal configuration but they can be combined using the series of connectors included with the Zeus PSU.

Rated at minimum 24dBA it?s most promising, we?ll have to find out if the maximum rating is not 60dBA (let?s hope not).