Corsair?s Nautilus 500 was the darling at several electronic trade shows and compared to similarly size external units boasts specs which have them running home to momma. Today we overclock an Opteron 148 under Nautilus 500 thermal management, read on to see if it can handle the heat. 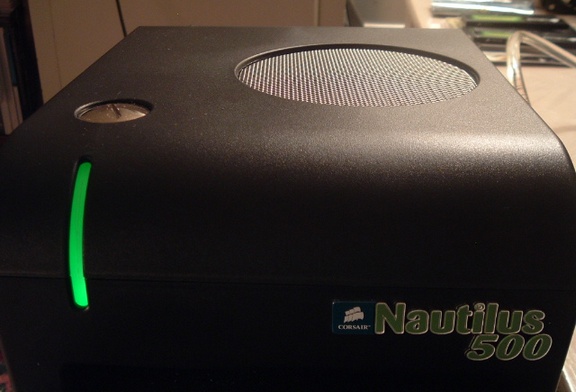 Over the last few years the water-cooling industry has been experiencing rapid growth in the OEM sector. Large companies have been seeking proprietary systems to hang their logo on and various component makers have expended their production to supply these orders en masse. Corsair entered the H20 cooling fray over three years ago with the introduction of the Hydrocool 200 external unit. [M]adshrimps reviewed Hydrocool 200 shortly after its release. For their second foray into H20 Corsair "came in from the Ambient" introducing an internal water-cooling kit Corsair COOL. I had the opportunity to review Cool finding the water-kit offered great flexibility as the radiator/fan assembly could be mounted internally or externally and in multiple locations. Corsair's return to external H20-cooling is a promising package, ergonomically streamlined at 1/4th the size of Hydrocool and boasting over twice the performance potential, the Nautilus-500 should appeal to the H20-Novice for its simplicity and to H20-Enthusiasts for its cooling prowess.

Although water-cooling out-performs air-cooling in just about every application, the single greatest obstacle is the additional production cost to the manufacturer. For a particular company to design and build an all inclusive H20-system, various components must be out-sourced, assembled in-house (or at another location) and then "packaged" in a design which is unique to the company selling it. Not always an easy task since there are a limited number of pump, radiator, reservoir and water block makers. Furthermore where cost is a prohibitive factor, by definition it must be passed on to the consumer. To date the desire for H20 cooling (industry wide) has not outweighed its price tag; however, we are rapidly approaching a divergence where cost is beginning to drop and commensurate with H20's superior performance. Fortunately the number of fabrication facilities specializing in water-cooling components has grown dramatically lowering production costs while providing more options for manufacturers and consumers alike. 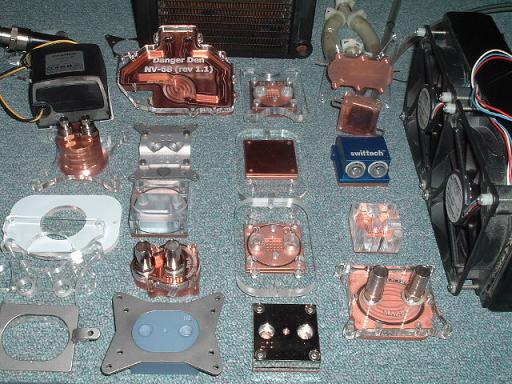 Miniaturization or scaling is the driving force in the world of microprocessors; CPUs in particular continue to decrease in size while clock-speeds and processing power increase concurrently. Ideologically the goal behind each die shrink is to pack more transistors into less space, transistors which switch faster and consume less power. Logically lower power consumption should equate to less heat, unfortunately the nature of processor architecture is antithetical in this respect. With more transistors occupying less semiconductor real-estate problems such as capacitance and gate leakage raise thermal output considerably. Evidence of this can be seen simply by comparing the size of CPU heatsinks over the years. Air-cooled heatsinks have continually grown upwards and outwards into massive "sky-scraper" sized structures (plumbing included via heat-pipes) as in Thermalright's HR-01 at 518gr, or the Zalman Fatality 1 at 918gr respectively! Water-cooling is not only ideal due to H20's specific heat capacity, the amount of copper required to build a water block is miniscule compared to the required surface area of an air-cooler. Ultimately a well designed water block need not be any larger in it's base plate (contact) surface area then a processor's IHS (Integrated Heat Spreader) and in this respect the water block acts as a "point source cooler." Looking at the photo below, which would you rather have "strapped" to and hanging off your motherboard? 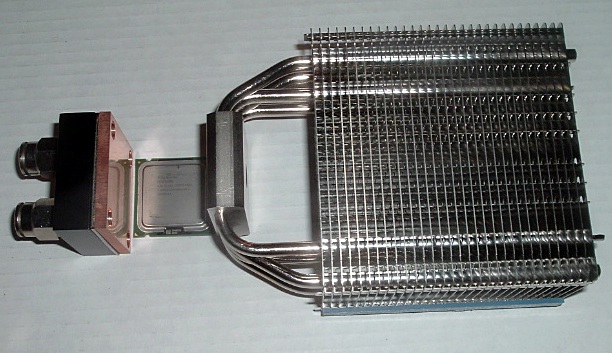 Specialization has always been a concern for manufacturers investing in H20-cooling since most components were borrowed from other industries, then had to be modified. The only components originally designed and constructed for PC/Notebook water-cooling were water blocks and reservoirs. Pumps originally derived from the Aquarium and Fountain industries, radiators were originally salvaged automobile heater-cores. Both areas have seen progress. Insofar as DC-pumps are concerned specialization and miniaturization continue to produce better products from LAING, maker of the DDC (Delphi DC) DC-pump and C-Systems maker of the CSP-MAG DC-pump. Seen below the CSP is about as svelte as they come yet offers respectable pressure and flow-rate. 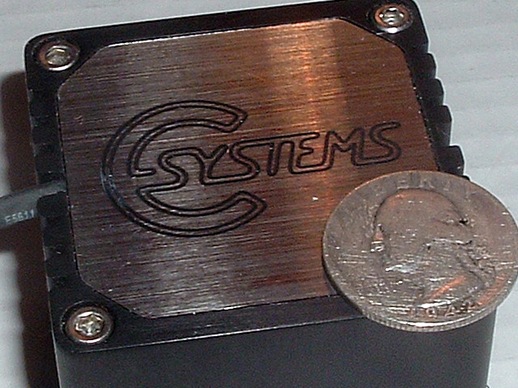 While pumps, water blocks and reservoirs can be miniaturized the radiator is another matter. In this respect the laws of physics are unforgiving since even water-cooling ultimately uses air to remove heat from the system via convection (passive) or forced convection (active (fan)). This is where the external water-cooling system has an innate advantage over internal options. The problems for internal H20-kits are radiator/fan placement which ideally can only be installed into one of two locations; replacing the front intake fan, or the rear exhaust fan. In either scenario case aerodynamics are disrupted and the radiator’s location inside the case places it in proximity to heat from other components. Components which are now having a deleterious effect on case temps since the aerodynamic flow aiding in cooling has been reduced.