T-Balancer miniNG Fan Controller Review - A brain for your fans

What do you get when you put a bunch of talented Austrians into a small room with a bunch of fans, a few silicon chips and a soldering iron? The world smallest and most advanced fan controller, their miniNG is basically a brain for your fans.

The manual is on the inside of the packing and is quite compact but includes clear pictures and guidelines on how to set the device up. However some knowledge of PC hardware is required and it’s not all too newbie-friendly. I would advise to configure the unit outside the case before you stick it somewhere (out of the way) inside your case. The small jumpers are not too easy to remove when you’ve got the unit placed into a cramped area. 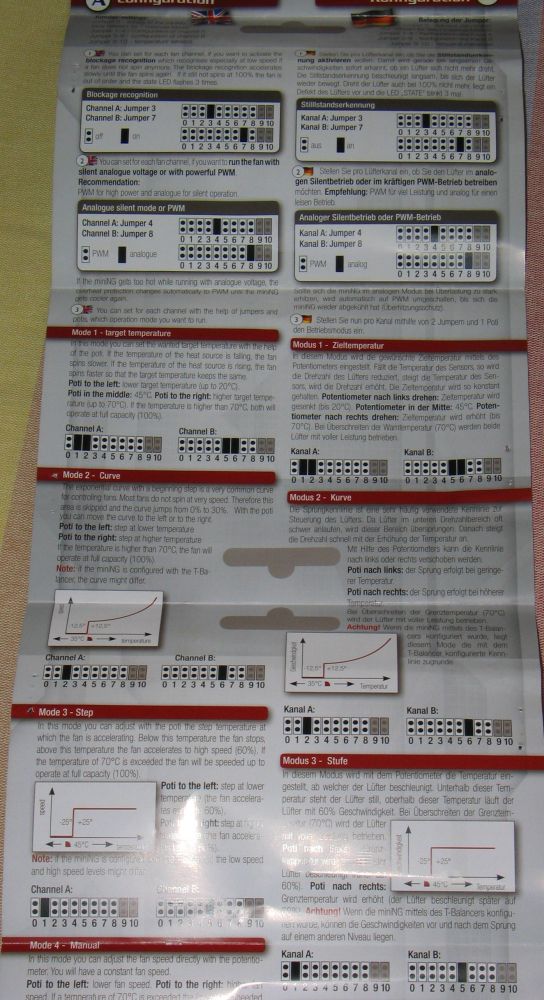 Brain for your fan

A fan is dumb device, it powers up when you plug it in it will run at the maximum speed at all times, you can alter the voltage of the fan through use of a fan controller, this doesn’t make the fan smart though as you still have to do the thinking for it. Recent motherboards have a “smart” fan control option in the BIOS which will increase/decrease voltage to the fan depending on CPU temperatures, it’s a step in the right direction and it’s definitively something you ought to look into for your CPU cooler fan. However this “smart” fan options only works for one fan connector on the board, which is marked “CPU fan”.

All the others fan connectors still work as normal, there are some excellent free software tools like Speedfan which help you to control your motherboard’s fan connectors better, you can set alarm temperatures and have the fan speed up/down, it’s an okay solution but requires again quite a bit of interaction from the user and it doesn’t make the fan smarter, if the fan doesn’t get enough voltage from the motherboard fan header because Speedfan decreased voltage too much, the fan will stop and your system will overheat. Speedfan can be configured to start beeping/blinking when something overheats but it requires your intervention, again, soy you need to set the fan to speed up so it can cool the system. 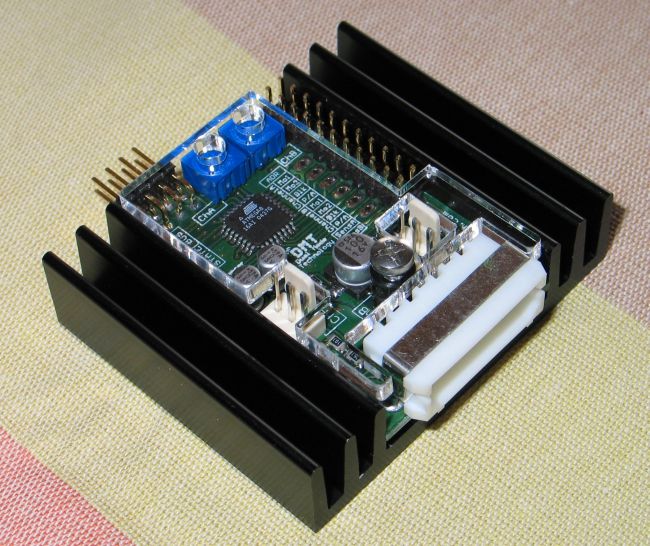 In the end you’re still left with a fan control system which needs quite a bit of management and supervision. This is where the miniNG steps in, it can make your fan work independently and correctly without any user interaction, speeding up when the temperature rises, slowing down at idle moments and when the fan stops because it’s not been given enough voltage, the miniNG will notice this and increase voltage to make the fan spin again. Although all this doesn’t sound too exiting to the layman it does provide for a trouble free method of reducing system noise.

The miniNG can power any fan, it has enough voltage and amperage, multiple Vantec Tornado/Delta fan’s are no problem, the only requirement is that the fan you are using has a 3-pin connector with RPM signal; if you try to use a fan without RPM signal (or you try to reroute the RPM signal to the motherboard) the miniNG turns into a dumb device letting the fan spin at 100% at all times no matter how you configured it. Luckily about 99% of all fans made for home computers have the required RPM signal, after plugging them into the miniNG the unit will be able to control them flawlessly. 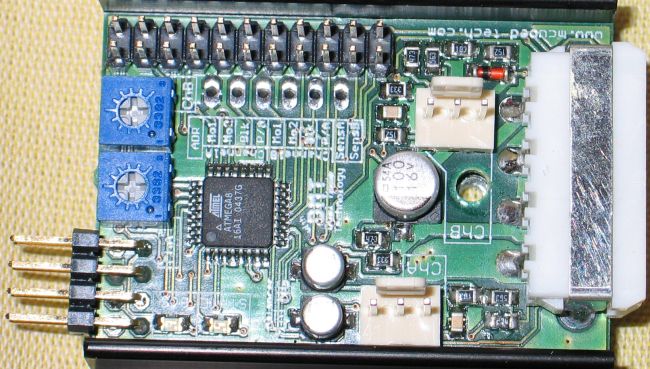 The jumpers control several options for each channel (there are two channels A/B), you can set fan block detection, analogue/PWM (pulse width modulation) power, and the different configurations on how to fan should speed up/down.

The block mechanism relies on the RPM signal, if the fan slows down and halts at a certain voltage; let’s say 3v, than the miniNG will gradually start to increase the voltage until the fan starts to spin again. Now what happens if you have a fan that doesn’t start spinning at 5v but when you first power it on at 12v and turn it back to 5v it continues to work? The miniNG solves this dilemma by giving a short burst at 12v at first power-on.

PWM or analogue? The T-Balancer XL had PWM power output which allowed fans to run at very low speeds without halting, this is made possible by the PWM technology which delivers small burst of 12v at different intervals, if you slow down the bursts the fan spins slower, if the bursts follow each other up quicker the fan speeds up, so far so good. However some fans don’t like PWM very much, causing irritating motor noise and generally being more obtrusive at 5% speed with PWM compared to 50% with analogue power. The T-Balancer XL allowed the frequency of the Pulse to be changed this tweaking helped for some fans making them quieter; the miniNG doesn’t have this tweak but does allow you to run the fan with analogue power, which doesn’t have any of the motor-noise related issues.

With analogue power the fan speed can not be reduced as drastically as with PWM but it’s not too bad either, most fans will be quite happy with 5v and they are silent at this setting.