Sansun is a newcomer to the retail enclosure market; with years of experience in the distributor sector they put their experience to good use. Straight from the darkest pits of a dark cave comes their first offering, the Bat case. We draw the Joker from our pack of twisted product tests and find out if this case is up to the challenge.

To be honest, until Sansun mailed me I hadn't seen their name before. The SANSUN group was established in Europe as an IT distributor, but they moved onto a specialized manufacturer in 2004. They offered us an opportunity to test their SN-C001 case nick-named the “Bat”, it’s a mid-tower sized ATX case with wings and creepy eyes. 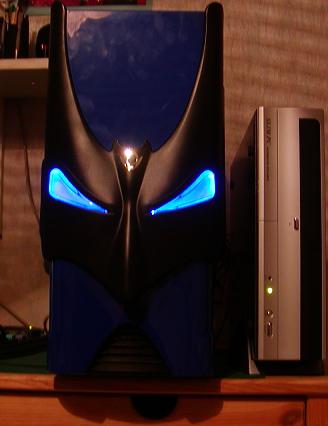 You can pick your color:

With a weight of ~8 kg this case cannot compete with the lightweight cases instead you get extra functionality and a pre-modded case.

More information can be found on the manufacturers' product website.

In the package there was of course the case itself. In the case I could find a lot of screws, perfectly separated in different bags. This was very handy, as there was no timed wasted anymore by sifting through a large bag to find the fitting screw. No PSU or power cable was supplied with this case.

The evil looking front represents a bat, while both the side panels have the bats' wings on them. Although made of plastic they look and feel strong. On the pictures this might look different, but they are quite solid.

The frame and panels of the case are made of metal. And have nice mirror-finish blue paint on them.

Almost every enthusiast case now has headers for front USB ports and audio jacks. This case isn't different; Sansun has placed them on top of the case, next to the power and reset button. The front of the case remains untouched this way and perfectly symmetric.

Behind the front door, the optical drive bays and external 3.5” bay is hidden, the covers are very well secured. Removing them requires removal of the front panel. That's also why that isn't secured when you get the case. The required screws needed to fix that can be found in one of the screw bags. Sounds like a lot of work.

In practice it only adds a small amount of overhead during the installation compared to the average case, as the screws (-holes) are easily accessed.

To keep the system cool Sansun ships this case with an 80 mm and fan duct in the side panel. While using a smaller sized CPU cooler this will work perfectly, but from the moment on you start using third party coolers, which tend to tower over your motherboard, the panel with the fan duct can't be installed. But it's easily removed by unscrewing the 4 screws. Both side panels feature the same fan grill.

There’s room for an additional 80mm fan in front of the HDD rack and an 120mm at the rear.

As mentioned before, both side panels feature the same 80mm blow hole cutout and fan grill, however on the right panel there’s no real point in having the blow hole, I guess it was done to keep the case symmetric.

The front panel features LEDs which are powered by a 4-pin molex, once connected the Bat’s eye lit up and emit a blue light. The other source of light are the power & reset buttons, which will light up blue or red, depending on their function. (Power led/HDD led)

Let’s get a system installed ->