Alphacool is known for their high quality and high performance water cooling systems. Today we take their best performing water block and mate it with CORA, their new passive radiator, aiming to build a fast, yet silent system.

Below the Pentium 550 and Pentium 630 respectively, the blue object placed on the 550 is used to exemplify the amount of Thermal paste one should apply. I get many emails about this issue and thought I should mention it. The macro photo actually misrepresents the amount which in truth should be about half that shown. Don't spread the paste unless it's Nanotherm PCM+. Spreading can incorporate tiny air pockets in the paste. Placing a tear-drop size amount of paste in the center of the IHS and simply mounting your heatsink/water block will naturally compress the paste forcing any air out. Once a paste is spread tightening down the heatsink may not force any air out because heatsink bases are often imperfect, some slightly concave, some convex.

As I began to install the system I was somewhat disappointed with the mounting hardware, although other Reviewers found it to be simple, effective and sturdy, I felt differently. I've spent some time with this system which involved my transplanting it across three motherboards. Personally I don't believe this should be problematic, however; I felt the mounting hardware supplied to mount the NexXxos XP on Socket-775 boards to be troublesome.

To put it simply, Alphacool uses a steel tightening bolt which backs out of a metal four-point bracket secured by plastic fasteners. The bolt which tightens down into a divet milled in the center of the NexXxos XP, applies enough force to dislodge one or all of the plastic fasteners. The fasteners seems to be identical to those supplied by Intel with their stock heatsinks. While these are usually quite sturdy, they are subject to failure if the bolt is over-tightened, seen below. 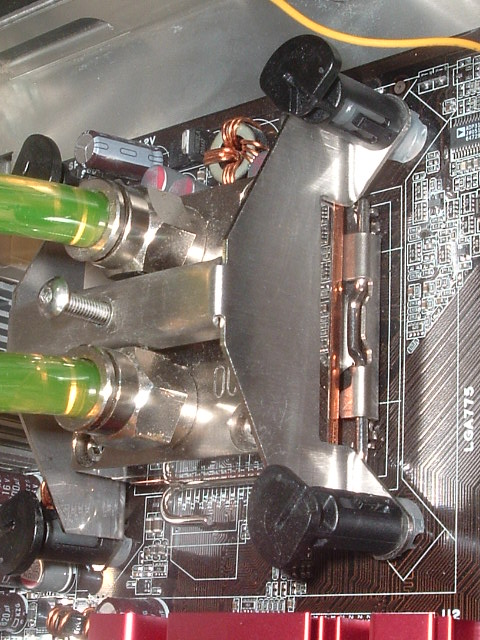 For the P5AD2-E Premium installation I chose to use the original mounting hardware supplied with the Alphacool NexXxos XP BOLD. This block uses a Lucite top plate which matches the mount holes on Socket-775 motherboards, as seen below where I’ve disassembled a NexXxos XP and attached a Lucite top plate (review to follow). 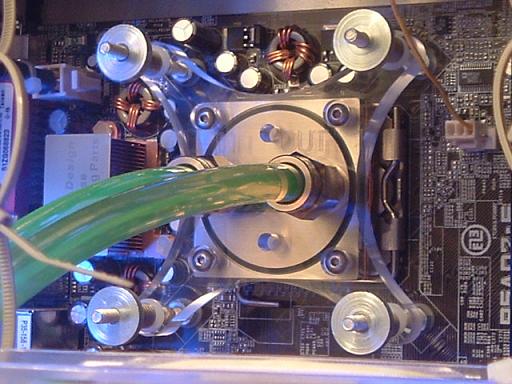 At least for the initial stage of the test I left the NexXxos XP BOLD mounting hardware in place and replaced the nickel plated top section back onto the XP. Without this section the thermal characteristics of the block would be changed. The ad-hoc mounting hardware fix will have no effects on the performance of the block, other then being able to tighten it down without fear of damaging the included hardware. Using the springs and washers so they tightened down onto the metal four point bracket I created a five-point mounting system. While somewhat complicated I wanted to show this is possible spending about $1.50 at the local hardware store or re-using old hardware. 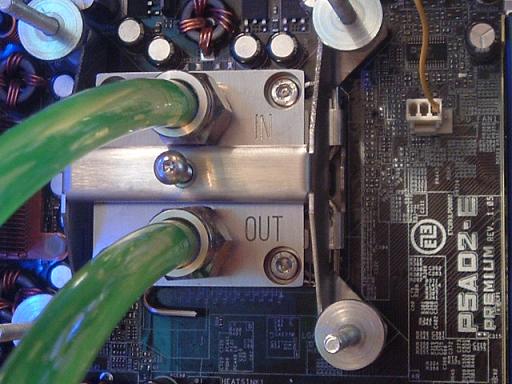 I want to stress while I didn't necessarily prefer the supplied hardware, this is not to say it's defective. On the contrary the hardware does work, although Alphacool may want to forewarn End-users that over-tightening the center-bolt can dislodge the plastic fasteners.

Below I have the original mounting hardware installed on the Asus P5ND2-SLI Deluxe. I had to be careful not to over tighten the center bolt, after taking this precaution the block was secured in place. 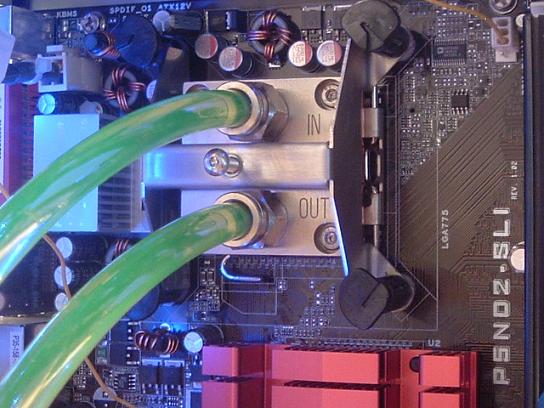 Is the title above a misnomer? Originally I began testing on the P5AD2-E Premium using a highly overclockable Pentium 630 (3.0GHz). This chip has easily reached 4.20GHz (15x280) without any need for vcore increase. Unfortunately problems arose with the CPU when attempting to Disable that processor's Enhanced Speed Step / TM1 features. While running S&M CPU-stress test utility, I found the previous highest 100% stable clock speed 4052MHz (15x270FSB) was throttling back to 3771MHz. Clicking on the left and right thumbnails below indicates a FSB speed of 270SFB, yet different clock speeds under 100% LOAD.

Since Intel engineers implemented features such as Thermal Throttling and On-Demand, the "art of overclocking" (at least where Intel is concerned) has been radically transformed. Since motherboard makers must follow CPU Thermal and Mechanical Design Guidelines, specifically Intel's Voltage Regulator Down VRD 10.1 (read section 2.6 which discusses D-VID) the semantics behind Default Vcore have undergone a metamorphosis. To put it simply when you look at your processor's vcore (in this case the 630) and it reads 1.25v ~ 1.388V it's no longer advantageous to "fix" vcore albeit at 1.25V or 1.38V in most cases. Choosing AUTO will allow the Vcore to fluctuate according to load and temperature. 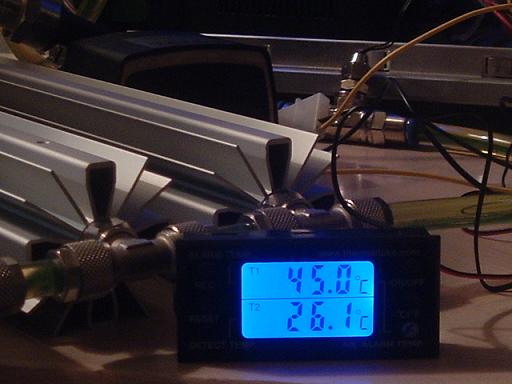 While I've been attempting to construct a Laboratory quality test setup based on a simulated-die (hardware donated is both needed & appreciated) I'm adamant about real-world testing in addition to this data. This involves minor details such as ease of installation, product design philosophy, build quality, value, etc. While the PC-hobbyist still comprises the majority of high-end water cooling, even those devotees aren't necessarily interested in deciphering Delta-T or K-Value graphs, only to discover they now know how well that product cool's a simulated die. While water cooling is a specialized method it shouldn't be so specialized as to be esoteric.

Unfortunately while the sites using a simulated die do provide a wealth of valuable data, nonetheless these results may be challenged on the basis that they are not testing the product's ability to dissipate heat in real world scenarios since the CPU does not heat up equally across its surface.

Our Pentium 550 dissipates 115W (Avg. Output), and the 630 dissipates 84W (Avg. Output) as specified in Chris Hares excellent Processor Electrical Specification Chart. Using the calculations provided in the chart we find the "Maximum Power Dissipation" for the 550 to be 153W and the 630 to be 112W. Applying the Overclocked CPU Wattage Calculator our Pentium 550 running at 17x240FSB our overclocked wattage equals 152W. For the Pentium 630 running at 15x270FSb the overclocked wattage equals 170W (given Vcore fluctuations these are conservative estimates). I've included a screenshot of the Pentium 630 overclocked wattage formula as performed on that software, thumbnail below

To measure water-temps from the passive radiator entering the NexXxos XP Thermaltake's T-Type Water Temperature Indicator was employed, the unit is accurate especially within our temp range. Using the TTGI Fan Master 610 I placed two thermistors within the case for case ambient and a third externally to measure room ambient. For water temp measurement exiting the NexXxos XP I placed a submergible Mercury thermometer in the reservoir to measure water-temps exiting the water block. This placement reveals how effectively CORA 662 is dissipating heat and how effectively Alphacool's NexXxos XP then cools our P4 630.