Arctic Cooling has made a name for themselves by providing silent and performing cooling solutions for VGA cards and AMD/Intel CPUs. Today we take a closer look at their NV Silencer 3 which was designed to be used with NVIDIAs Geforce FX 5900XT.

Arctic Cooling has made a name for themselves by providing silent and performing cooling solutions for VGA cards and AMD/Intel CPU's. Today we take a closer look at their NV Silencer 3 which was designed to be used with NVIDIA's Geforce FX 5900XT.

We had some photos prepared of the unit, but those made by Arctic Cooling really look so much better, so the individual Silencer shots are from AC! 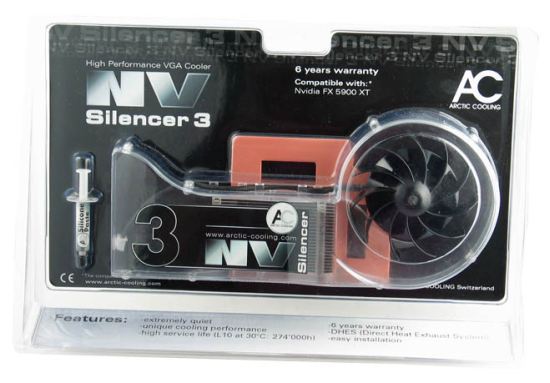 The fan draws its power from the same connectors as the default NVIDIA cooler, however if a manufacturer decides to use a custom connection (like Asus) then you need to some cut and soldering skills to make it all work. Not really Arctic Cooling's fault, but something worth noting.

The latest generation of the Silencer for ATI and NVIDIA has very similar looks externally, the differences lies in the copper base which needs to match the components of the video card used.

The NV Silencer comes in an attractive packing and includes a separate PCI bracket and thermal paste to providing you everything to get it installed. With the NV Silencer sample we received there was a new thermal interface compound included which promises better conductivity, its color and characteristics are similar to Coolermaster's Premium Compound and Shin-Etsu thermal paste. It's quite hard to spread out evenly over the GPU of the VGA.

The NV3 uses the 4 small mounting holes around the 5900XT GPU, before you can install it you have to remove the original cooler of course. We used a Chaintech 5900XT for comparison which comes equipped with a high performing (and loud) cooler and also sports flashy memory heatsinks. In our review of this graphics card here we replaced the default thermal paste with Arctic Silver 5. 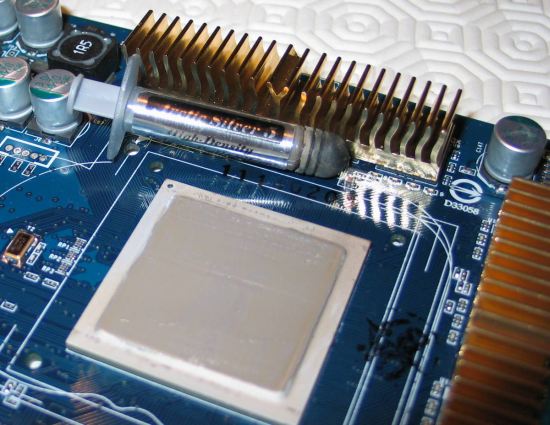 Let's get the NV3 installed ->