Arctic Cooling has made a name for themselves by providing silent and performing cooling solutions for VGA cards and AMD/Intel CPUs. Today we take a closer look at their NV Silencer 3 which was designed to be used with NVIDIAs Geforce FX 5900XT.

The GPU was detached quite easily by simply removing two push-pins, the memory sinks however needed a different approach, using a hair dryer to heat them up they came off and the 5900XT card was ready for a cooler upgrade.

The copper base of the NV3 also covers the memory chips also making it an all-in-one solution, the complete install took less than 5 minutes; very plug and play.

You have the sacrifice one PCI slot, but you get a quiet and effective cooling in return, the package includes a PCI slot cover which allows the hot air to be expelled:

For our temperature testing we used the 5900XT's onboard temp diode which can be read with Speedfan and temps were logged every 3 seconds to a file.

Our test system today consisted of:

The system was stressed with 3DMark2001SE and K7 Burn running for 1 hour, the highest obtained temperature was noted down. Room temp during testing was 25°C

Simply swapping the cooler and leaving the GPU and MEM speed at default does not yield a large difference in temps, in fact they remain pretty much the same. Overclocking the core and memory upped the temperate a bit, but nothing to worry about. With the Chaintech cooler we were able to push the GPU to 450Mhz and MEM to 750Mhz now with the NV3 we restarted our overclocking experiment, running Quake 3 Arena and 3DMark2001 SE for spotting errors while increasing speeds up to the point we saw artifacts and glitches. But as we saw in the comparison cooling numbers, the NV3 cools equally good as the Chaintech stock cooling, and no further increase in OC was noticable, unless you call 453/754 a huge increase :) 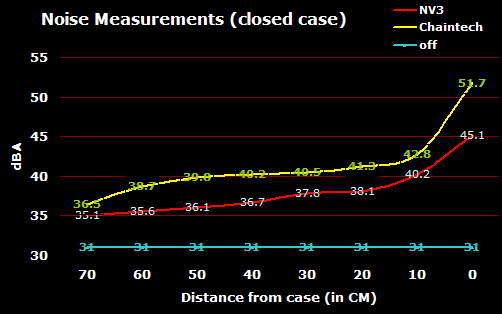 When we compare noise production it becomes clear that the larger fan on the NV3 gives it the edge, only when putting your ear next to the case you can hear it spin.

As you can see from the data above, numbers don't lie; the NV silencer does exactly as advertised, making the 5900XT a silent video card, without sacrificing overclock potential.

At a suggested retail price of $29/€24 you'd be hard pressed to find a better cooling alternative for the 5900XT. Arctic Cooling took the market by surprise with their first "Silencers" and today their new generation keeps true to the original concept of quiet computing.

If you are in the market for a 3rd party GPU cooler for your 5900XT, don't look any further;