Chaintech sends us their latest Springdale motherboard for review. We put it up against an Abit IS7 and Chaintech's own Canterwood solution, how well can it hold up? Find out in this review!

This is the second P4 motherboard we are reviewing this month from Chaintech, last week we took a look at their Canterwood (I875) motherboard solution and this week we pit it up against their own Springdale (I865) powered main board.

The Springdale motherboard is basically a Canterwood without the "PAT" (Performance Acceleration Technology) onboard. To find out what differentiates the I865 from the I875 I suggest this fine article by Liquid3D @ XS

to understand what the 865PE is, we first have to understand what it is not, and it is not an autonomous design. It doesn't have its own identity, in that it was never designed from the "wafer" up to be an 865PE. It's not even a "version" of the i875P by design, it's a failed i875P.

Don't expect Prescott support on these Springdale motherboards though, only some Canterwood motherboards out there will be able to support the Prescott CPU when flashed with the latest BIOS.


On with the show! The 9PJL2 Silver larger then average box and includes the following goodies: 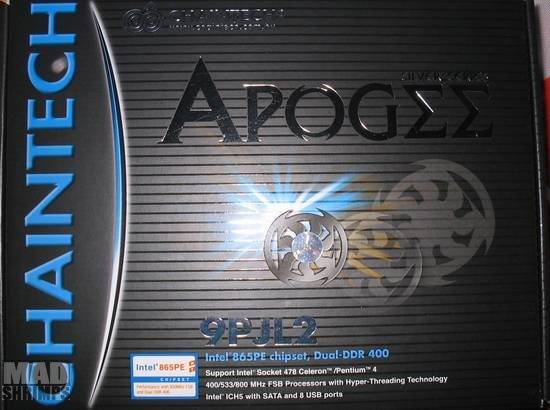