Fractal already revealed its upcoming Kelvin water cooling series at CeBIT 2014 in Hannover; at Computex we saw the same prototypes again. Back than the launch date was foreseen for mid-summer. Now on the 9th of December 2014 it is D-day for the new breed of All In One water cooling setups. Fractal proudly announces three AIO models today: the 120mm radiator T12 Kelvin, the S24 being the 240 radiator version and the flagship S36 will be the triple fan version. Today we have a look at the smallest version, the Kelvin T12; this might be together with the S24 the most enclosure compatible version as not all PC cases support a big 360 radiator. It must be said the AIO market is already pretty saturated with versions from Antec, Corsair, Cooler Master, Enermax and Swiftech. What makes this little Kelvin T12 stand out from the crowd ? Time to explore Fractal's latest release.

The Fractal Kelvin series are made together with one of Germany's top water cooling manufacturers Alphacool. This is not an uncommon procedure as most brands alike Corsair and Antec AIOs are all teaming up with Asetek and Cool IT technology. In a nutshell, what is so special about these Fractal Kelvin series?
First of all they feature a copper radiator, for a more efficient heat transfer. Nothing really new as Cooler Master also did this with their Eisberg series, however the radiators of the popular Hydro series from Corsair aren't copper based. Therefore the former feature a special mixture to avoid chemical reaction between the copper base plate and the radiator material, hence why some readers don't call these real water cooling units.
Secondly the Kelvin series are equipped with a fill port on the pump unit and the radiator for easy maintenance. These units are upgradable as standard G1/4" fittings are used all around, thus the possibility of adding optional water blocks, hooking up different kinds of tubing or even using other cooling fluids. The Kelvin series will not limit the end user at all. 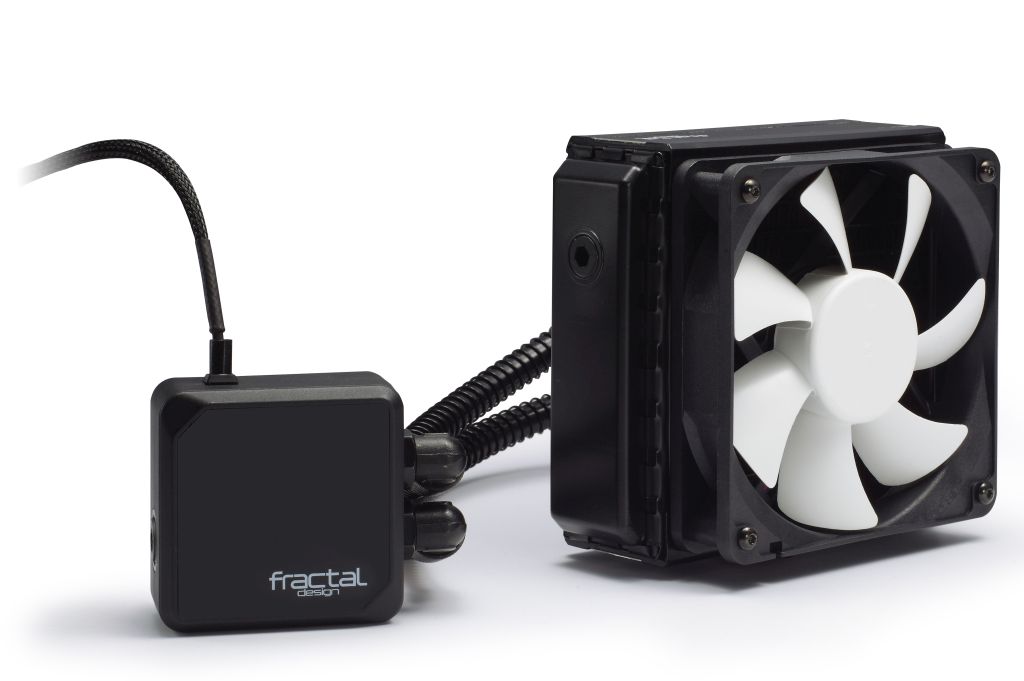 Since the launch of the Corsair Hydro50, the All In One models we have seen passing by at the MadShrimps lab have undergone some changes over the years. Their performance developed from generation to generation as the processors demands also evolved. For the 120mm radiator versions doubling the fans to create a push and pull configuration quickly became one of the standards. Thicker radiators also helped to dissipate the generated processor heat better. The move to 240 and even 360 radiators allowed for even more heat transfer. However most AIO models included high speed 120mm fans; these were providing great airflow, though being rather noisy when ran at full blast. A logic move to the bigger 140mm fans was not a huge success as these AIO models suffered from many enclosure incompatibilities. Upgradable AIOs are the latest trend, so the Kelvin T12 couldn't miss out on that feature.

The box art is in typical Fractal style, no frills nor thrills, just a clear shot of the included AIO and the "Powerful, Quiet and Expandable" quote reveals what the Kelvin series are all about. The different "components" are all carefully packed in their own separate plastic bags. 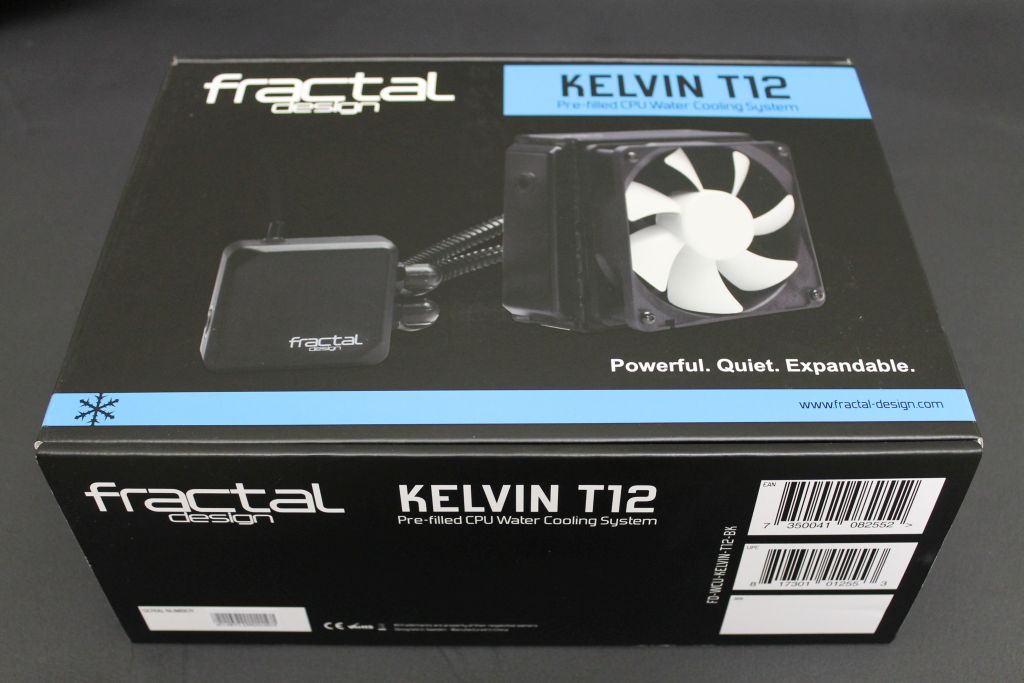 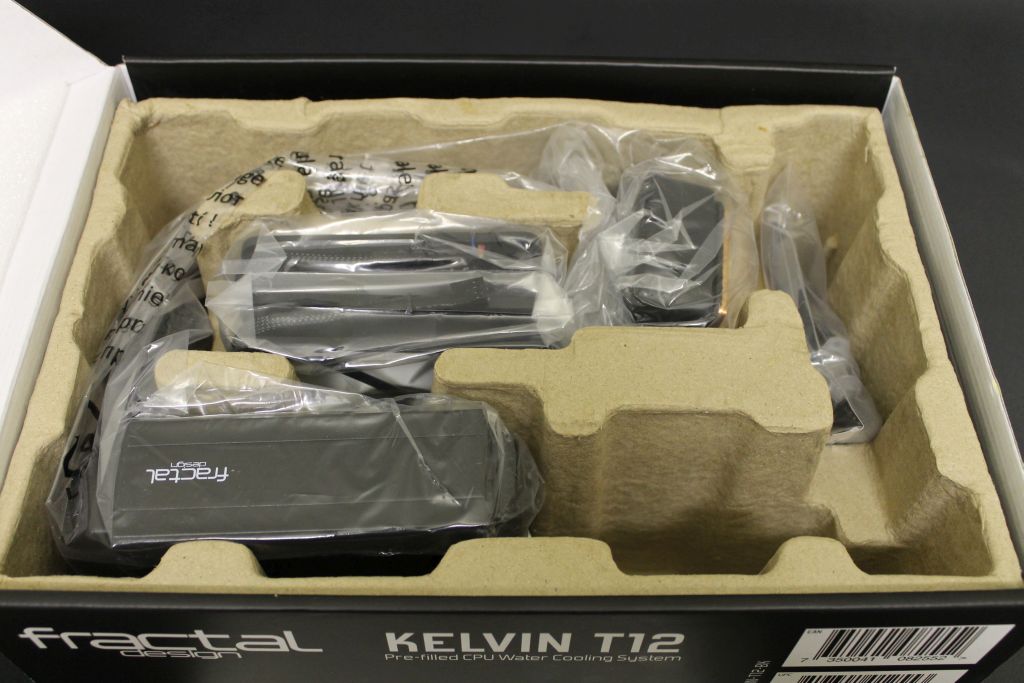 The technical specs are the following: 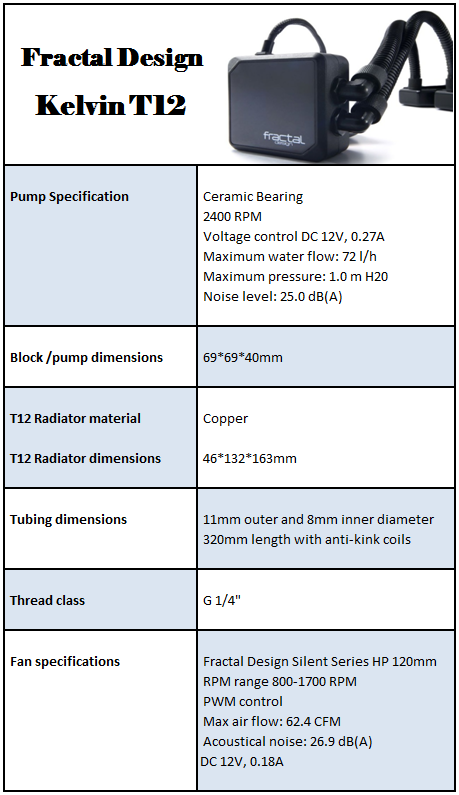