About the same time this year Intel introduced the world to their 4th generation processor aka Haswell, built on the same 22nm technology and using the Tri-Gate transistor technology derived from Ivy-Bridge. The Haswell processors delivered a decent boost in performance in regards to the predecessors. Most special about Haswell was the Fully Integrated Voltage Regulator inside the processor die, allowing finer coarse voltage adjustments inside the processor without the need of a gazillion phases on the motherboard. Maximizing power efficiency was Intel's main target: this integrated regulator solution was discussed heavily over the internet mainly due to speculations of extra generated heat. With Haswell the Intel HD integrated graphics solution also got a small boost versus the Ivy Bridge solutions; too bad that the Iris Pro with embedded EDRAM is only available on a limited number of Haswell processors as it is a real scorcher and can easily compete and even outperform AMD's latest Kaveri APU offerings.

Overclocking the Haswell generation was totally different from the Sandy and Ivy-Bridge generation. Haswell turned out to be a mix of clocking the previous released Ivy-Bridge (LGA1155) and the high end Sandy-Bridge E CPUs (LGA2011) on one platform. Loads of gear ratios and memory dividers allowed the OCer to maximize performance per clock.

For daily OC'ers the maximum clock frequencies reached were lower than with Ivy-Bridge; again the heat dissipation issue reared its ugly head.

For the extreme guys Haswell was sadly a return to Intel's usual Cold bug (+/- -120°C) which is a pity. Nevertheless a good clocking Haswell leaves a similar clocked Ivy-Bridge biting in the dust. 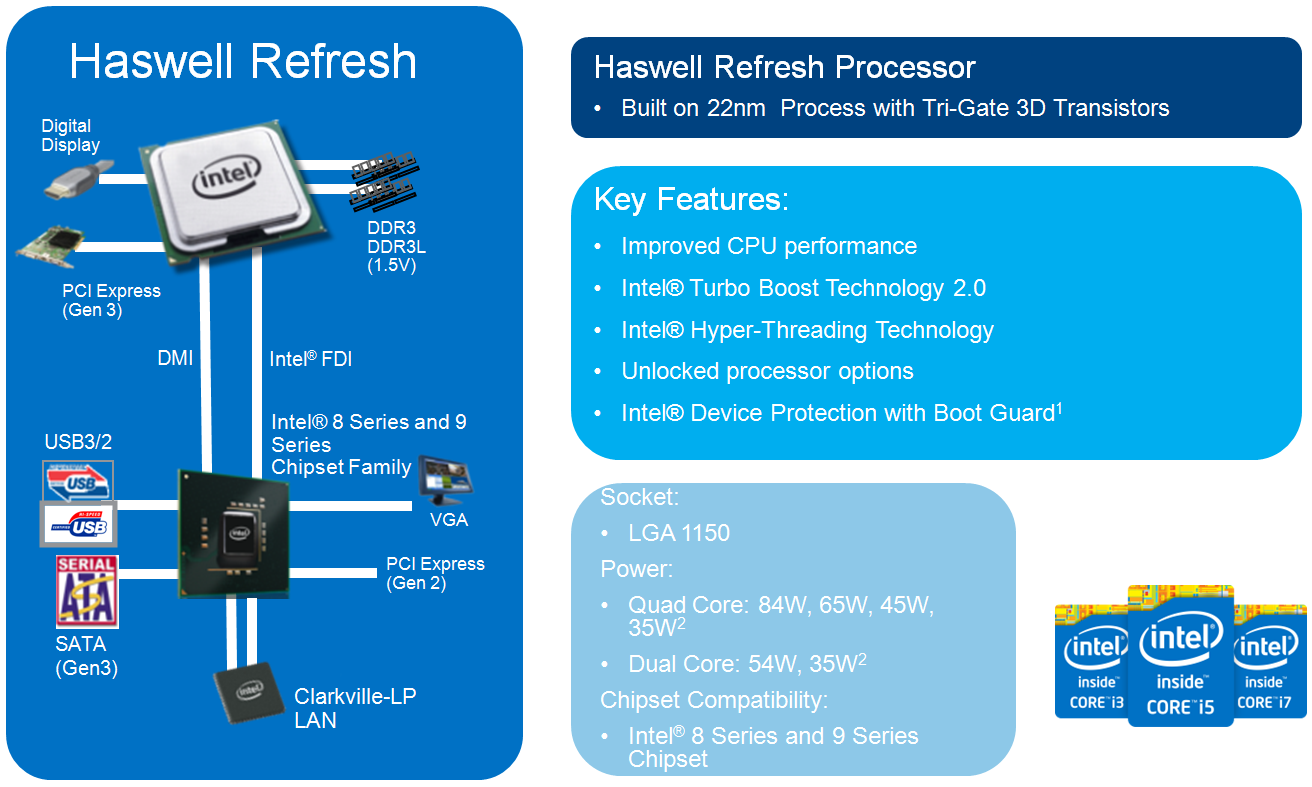 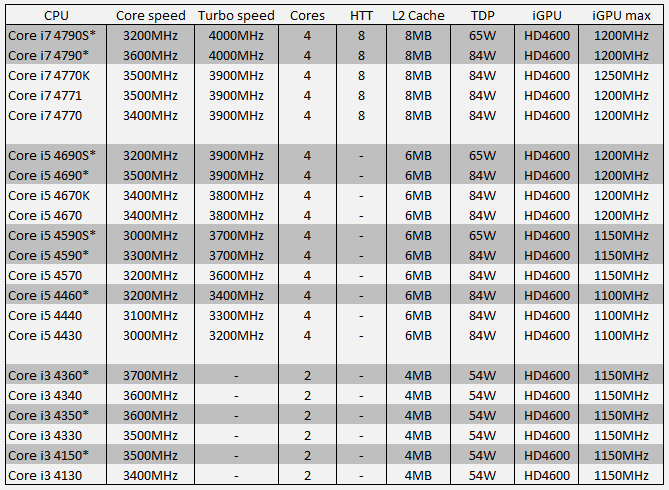 So what is new with these Haswell refresh processors? Really not much as they are build on the same technology. The general rule of thumb is: add 100Mhz added to the core clock and Turbo speeds combined by raising the type name with 20. Only CPU for which it is not entirely correct is the 4790, which has a 200MHz higher core clock and only 100MHz higher Turbo speed versus the i7-4770 CPU.

Haswell refresh is all about having a bit more performance for the same money, therefore Haswell refresh is a miniscule evolution versus the models launched over a year ago. A whopping total of 42 new SKUs are listed, whereof 24 are targeted for the desktop market. The refresh allows system integrators to sell new products in the entry and mainstream market, especially with the matched release of the new Intel desktop chipsets: the H97 and Z97. The motherboard manufacturers already released a massive amount of new motherboards, but more on the chipset later.

To be honest this launch is a bit dull and overshadowed by the delay of the Devils Canyon K SKU, many expected to see some features to be already included in these Refresh processors. Now the super OCable Devils Canyons will be amongst us within a few weeks; secondly the 5th generation aka 14nm Broadwell architecture has again been delayed till even early 2015.