Last Monday Intel held an online conference with all the media; to our great surprise Intel wants to reinvent the desktop, A new direction from what we were used to hear not so long ago. Desktop are far from extinct and still take almost half of the market; secondly Intel sold a record number of core i5 and i7 CPUs, so there's no reason to abandon the desktop market. In the below brief snippit, extracted from the conference call we will highlight the four new processor series the Redmond giant has planned for the desktop market. Best of all is that these are not far future based projects, but these new technologies will hit the shelves mid of 2014.

At the last CeBIT Messe in the lovely Hannover we already saw some new motherboards pop up, partly revealing that Intel will launch a new chipset; sadly we officially can't disclose the exact name of the former mentioned chipset; nevertheless mostly everybody has already figured out the new name for the sucessor of the Z87 chipset. A new chipset release usually goes hand in hand with a new processor lineup. Last Monday Intel partly revealed some of its plans for mid 2014. Without wasting too much words, believe me it's gonna be a very interesting summer.

One of the biggest complaints with the 3rd and 4th Generation processors was the inferior heat transfer from the processor cores to the Internal Heat Spreader, mainly an issue due to the used TIM and/or the amounts of glue that held the same heatspreader in position. 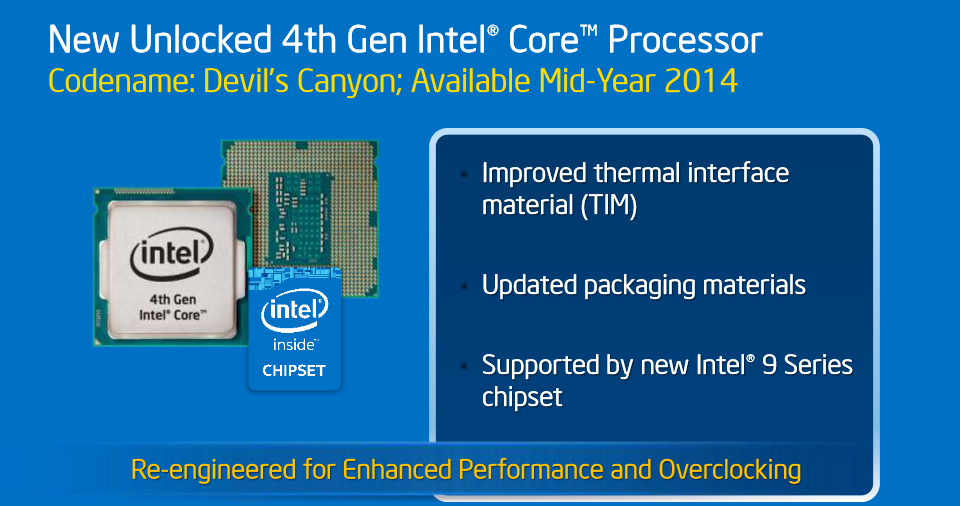 Codename Devil's Canyon will be the refresh of the current 4th generation Haswell CPUs; Lisa Graff, Intel's desktop spokesperson warranted better performance and higher overclocking potential. No real world performance was officially disclosed though; however if we look at previous Tick or Tock releases, the increase in performance can be expected around the 5-10% mark, which is again great news for enthusiasts and overclockers. The updated packaging materials sadly only refers to a new box design to ship the CPUs in. To fully  benefit from the new architectural enhancements the new upcoming Intel 9 series chipset must be used, though many brands already have BIOSes ready for this Haswell refresh and the older Z87 chipset based motheboards. An interesting test to see whether the claim to be obliged to use the new Intel 9 series is valid yes or no.

Since the Pentium Brand has been introduced 20 years ago, Intel will release a new Pentium Anniversary Edition. The end user has the possibility to overclock these unlocked multiplier Haswell based Pentium CPUs for maximum performance at an entry level price. Slight instruction enhancements and the addition of Intel Quick Sync Video will be a big plus for the entry level Anniversary Pentium processors. 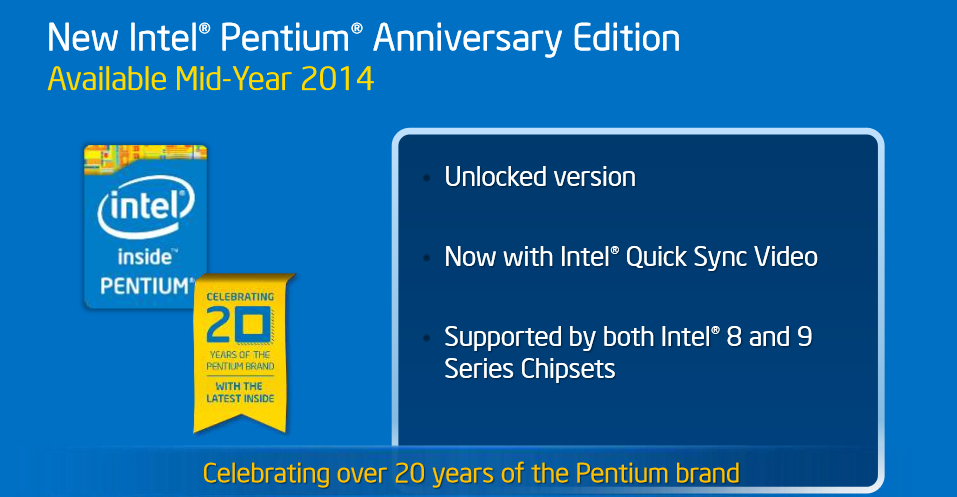