Last Monday Intel held an online conference with all the media; to our great surprise Intel wants to reinvent the desktop, A new direction from what we were used to hear not so long ago. Desktop are far from extinct and still take almost half of the market; secondly Intel sold a record number of core i5 and i7 CPUs, so there's no reason to abandon the desktop market. In the below brief snippit, extracted from the conference call we will highlight the four new processor series the Redmond giant has planned for the desktop market. Best of all is that these are not far future based projects, but these new technologies will hit the shelves mid of 2014.

The integrated graphic devices are evolving generation on generation, though even the latest desktop HD4600 iGPU of the Intel Core I7 4770K is not powerful enough to compete with the integrated graphic solutions of the AMD Richland and Kaveri APU offerings. Only the Iris Pro with embedded 128MB EDO RAM of the Core i7 4770R is more powerful then the previous mentioned AMD solutions; major drawback is these Iris Pro CPUs were till now only available in pre-build small form factor PCs alike the Gigabyte Brix-Pro solution. Compared to the AMD APUs it is a powerful solution both graphic and processor wise, though the price of the 4770R CPU alone is more then the double then the earlier this year released AMD Kaveri A10-7850K processor. 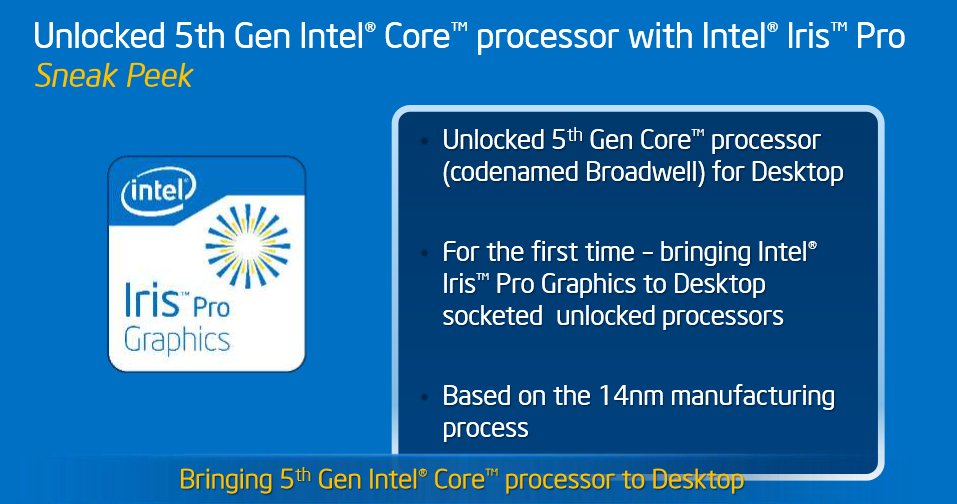 With the upcoming 5th Gen Core, codenamed Broadwell Processors, Intel will finally make the Iris Pro graphics available for desktop users. If the Iris Pro will be available as promised in the Core i5 and i7 K skew processors, it will cause a serious stir in the APU market.  Better processing power and decent medium resolution game play on the 14nm Intel processors will take out a serious bite out of AMD's market share in mid 2014. Again no technical nor performance info was disclosed during the conference call. Though we must admit it all looks promising.

Last but not least Intel plans to release the Haswell Extreme series 2nd half of 2014. Bundled with the launch of the Intel X99 chipset, there is no doubt this high end platform will be one of the fastest retail available desktop platforms on the planet. Xeon 8-core technology will available for the desktop users. The usage of DDR4 memory will be expected to be at start low running frequencies (around 2400MHz), though we all are hoping for +3000MHz, to squeeze out that little extra performance. Some websites already leaked the names of Broadwell-E processors (i7-6820/6930K and the extreme i7-6960X), stating these will be compatible with the upcoming X99 chipset. Speculation of course, as this is still a generation further ahead. It would be logic that Intel won't make a chipset swap for the next generation. Great to see the high end range receiving a major overhaul this year. 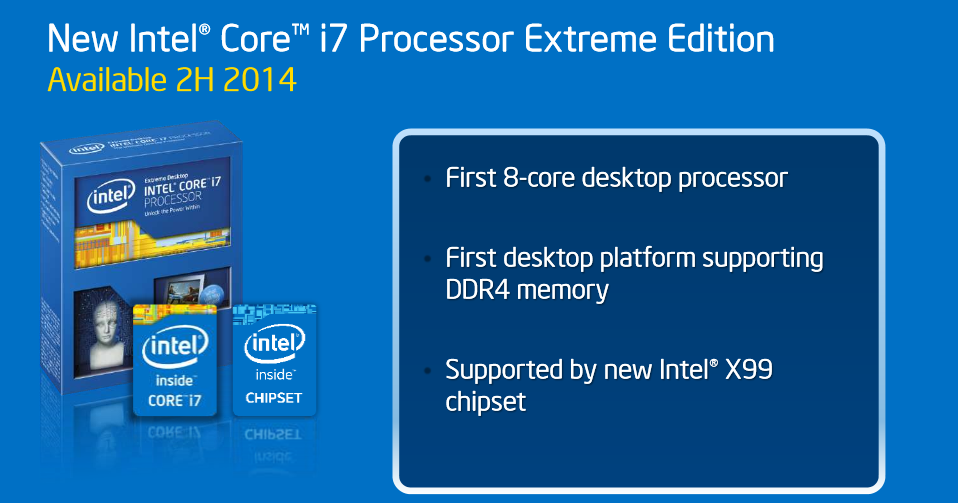 Similar to the current Ivy-Bridge E platform, it will remain the million dollar question if the costs will add up to the performance gain. 3D rendering and co will greatly benefit from the new architectural technologies, gamers might better stick with the more affordable Haswell/Broadwell range. However it is still early days. Our yearly visit to the center of the hardware bussiness and development Taipei might reveal more concrete info what these new technologies will bring. Computex 2014 will be a very interesting trade show for sure !