Intel keeps on pushing their technology to the max. Even while being the performance leader in most hardware segments, their engineers are driven to (re)design new architectures to satisfy the end-user's desire for more speed. However the focus with this CPU generation is not purely based on raw speed; this 4th generation main objective is to reduce the power consumption to the max, to gain grounds in the portable market. Rumor that Intel was pulling out of the desktop market has partially become reality. Not leaving the desktop market for what it is, as they will continue to develop the chipsets and processors. With Haswell we see the last releases of Intel's own motherboard branch. The market share of notebooks, ultrabooks, tablets and mini enclosures are steadily taking over the market share of the desktop. Enhanced battery life, a result of a reduced power consumption, an enhanced onboard graphic chip and the reduction of required motherboard components are the major trademarks of Intel's 4th generation processors. Time to put both K skews to the test.

We see the return of the Gear Ratio dividers from s2011, also named as Processor Base Clock. With Sandy and Ivy-Bridge we only had access to overclock the 100MHZ Bclock by a 5-12% margin. Unless you bought a K skew CPU, which has an unlocked multiplier, boosting your system's performance was rather limited. With the addition of the 125, 166 and 250 gear ratio, it could allow overclocking of your multiplier locked, aka non K skew processor. We mention could as Intel apparently has set some limitations in the non K skew CPUs. Secondly the extra ratios unlock extra RAM dividers ( System Memory Multiplier ) as can be seen in the below table. 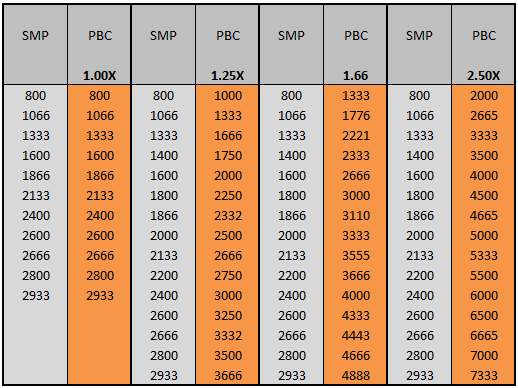 At the stock 100MHz Gear Ratio we got the selection of up to 2933 RAM divider, this in 133MHz increments. When selecting another Gear Ratio we unlock 4 extra RAM dividers to allow finer tuning. Take note that PCI-Express and co is not influenced by the Gear Ratio. For your info the 2.50 ratio does not post ( yet ) 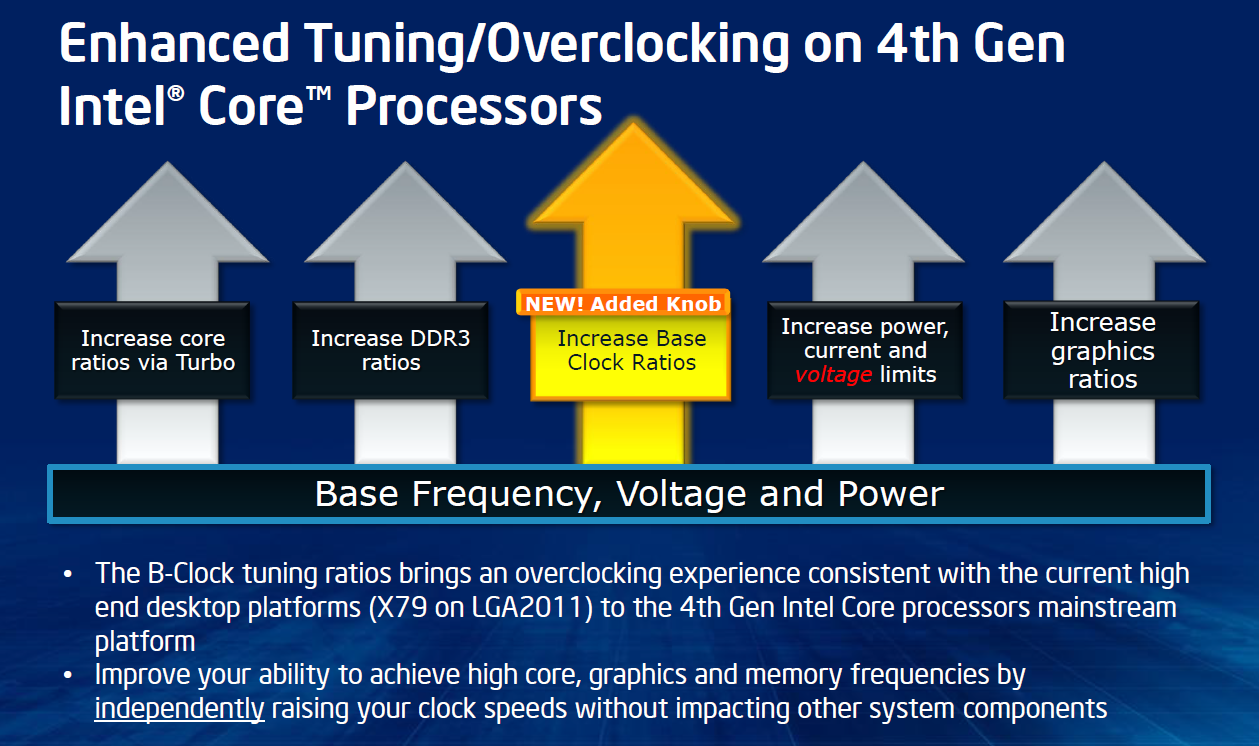 Biggest novelty on the new Haswell processors is the integration of the voltage regulator (VRM) inside the Die. Intel labels it as FIVR or Fully Integrated Voltage Regulator. On previous platforms, the voltage regulator module was part of the motherboard design. However the performance and granularity of such implemented multi phase CPU power circuits are not up to Intel’s current standards. Keep in mind that the main target audience for Haswell is the portable market, thus reducing the power consumption is a big priority. On top of that, reducing the cost of the motherboard components is a bonus too.

Not much info has been provided by Intel itself in the reviewers newsroom section. But the several distributed/leaked slides tell the tale. A special programmable chip, consisting out of 20 power cells aka mini VRs, has been developed and integrated inside the processor Die. Each power cell has an analogue circuit, which is rated up to 25A of electrical current and supports up to 16 phases. Meaning that the onboard iVRM is capable of delivering the power of up to 320 power phases. All this at the mere dimensions of 2.88mm² per cell, taking a total of just over 105mm² of the total Die size.. 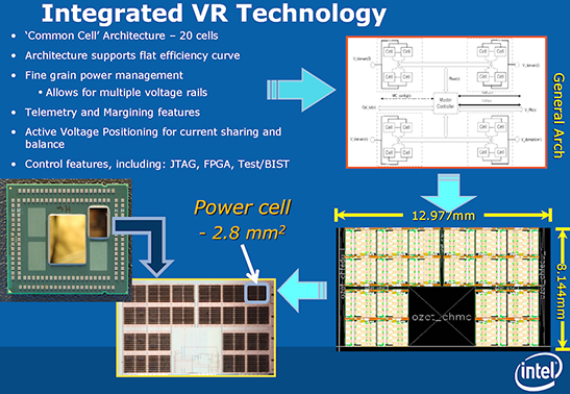 An incredible technological advanced progress, unthinkable on any current motherboard design. This FIVR design allows maximum power consumption control. Each core is controlled independently, same for the integrated graphics core, the system agent, as controlling all the interconnection busses within the Haswell CPU, all of course depending on the application used and strain put on the processor. 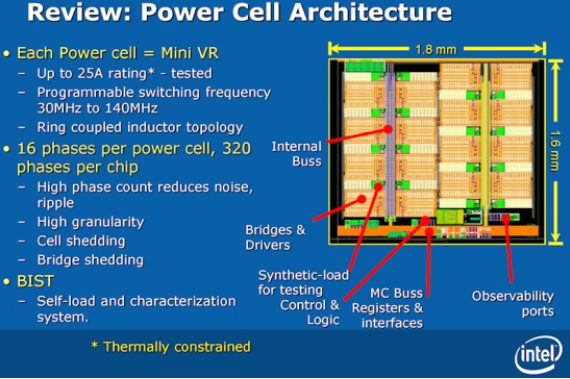 Nevertheless this does not imply that motherboards no longer need any power circuitry components on the board. Especially entry level and mainstream boards will look kinda cheap as most of the Chokes, MOSFETS will be seriously reduced in number. The motherboard still needs to feed the FIVR ( VCCin) with the required amount of juice.  How much the Integrated Voltage Regulator Module influences the CPU's operating temperature is a mystery and has already been heavily discussed on the internet. 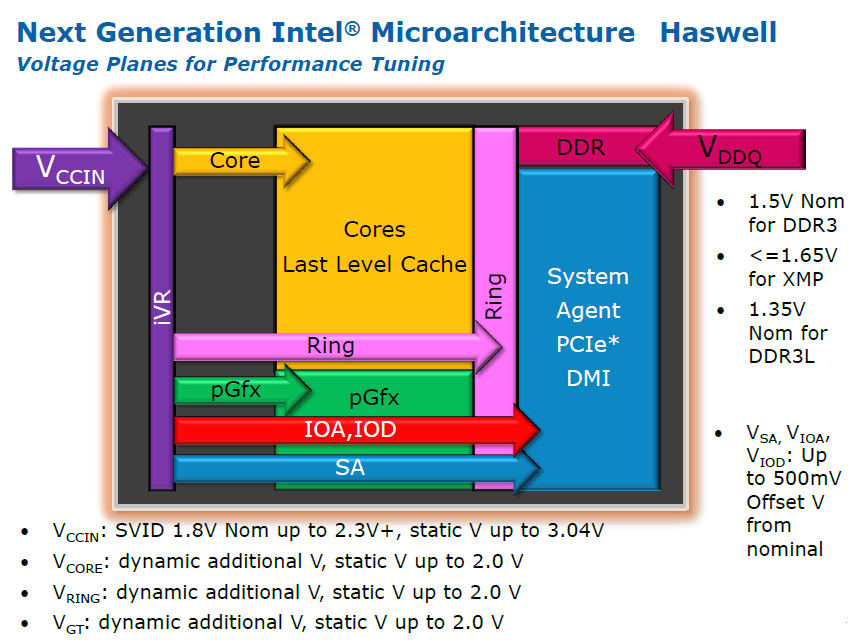