Corsair just recently launched a brand new Hydro series with the H80i and H100i units, both coolers being updated versions of their predecessors, not alone being overhauled in the cooling/pump block design, but also the addition of the new CORSAIR AIR Static Pressure fans was a big plus for the new Hydro i series. Secondly the LINK software was now directly supported, without the need of buying the optional Command Control set. The new features boosted the cooling performance and versatility for end-user adjustment. To our big surprise, two brand new Hydro units arrived on our doorstep. The Hydro 90 and 110, both being optimized for extreme cooling performances. Weirdly enough these brand new coolers are not based on the latest Hydro I series, but seem at first glance a revamp of the older Hydro 70 design, manufactured by ASETEK for CORSAIR. Biggest innovation is the usage of a 140mm radiator and ditto fan, instead of the 120mm version we are so accustomed too. More radiator surface should enhance the cooling capacity. Let's find out how these two Hydro units perform...

The brand new Hydro 90 or plain and simple H90 is CORSAIR's latest addition to an already big lineup of All In One cooling units (AIO). Deviating from the standard 120mm design, CORSAIR now goes one step further, to 140mm. 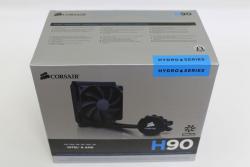 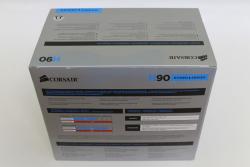 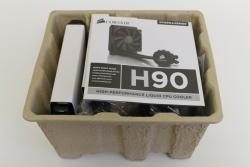 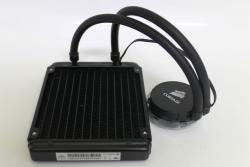 At first glance the new H90 resemblances a crossover between the early H50/60 radiator and the H70 pump design. However as can be clearly seen in the below pictures the radiator surface is drastically increased by opting for the 140mm size. The comparison below is between the H70 and the H90. Take note that the H70 already received a thicker radiator to increase the cooling surface. We opted to include the Hydro70 in the picture set, as the pump design looks pretty familiar to this Hydro 90. 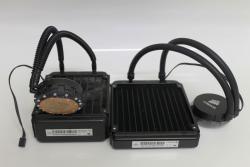 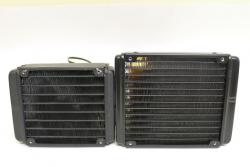 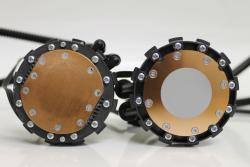 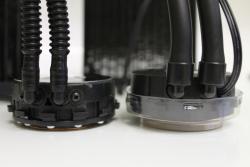 When comparing both pump blocks, major differences can be observed. The copper block surface is slightly increased and now completely round. No connections for the FANs nor a LINK port. LINK is not supported by the 140mm Hydro 90. The swivelling mounts are still present, but the filling/bleeding hole has been omitted. Bye bye to the old stiff tubing and welcome low evaporation, easy bend tubing. Too bad the H90 tubing is not of a similar size as the H80/100i. 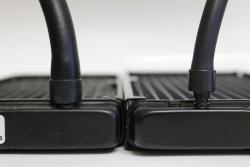 The H80i tubing on the left, the new H90 on the right, the differences in tubing dimension are apparent.