Lovecraft Designs was originally founded as Cain & Cain in 1980 by Terry Cain. Just prior to his passing in 2006, Terry entrusted his friend and associate Jason Flanary to head the company. Jason has not wavered in his commitment and Lovecraft Designs continues to forge ahead. This passion is prima facie in the Abby loudspeaker´s engaging performance 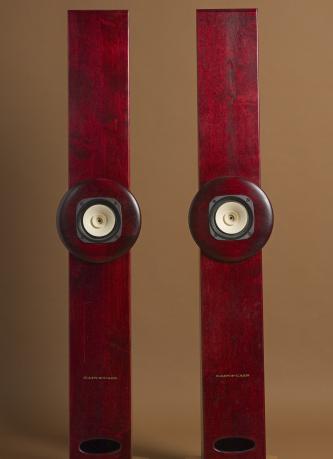 The Abby single-driver loudspeaker is one of several models from Lovercraft Designs formerly known as Cain & Cain. The Abby's are still hand crafted from pure Alderwood by current owner/designer Jason Flanary whom Terry Cain entrusted with his dream just prior to his unfortunate, untimely passing in 2006. In fact every pair of speakers which left the Cain & Cain facilities for years already had Jason's innate skill and devotion within. Jason Flanary has not only remained steadfast in his commitment to keep the entire speaker line alive, one can only imagine how difficult this must have been given the circumstances under which he was handed the reigns. That commitment to excellence can still be "heard" in every Lovecraft Designs product primarily due to Jason Flanary. 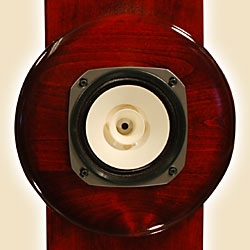 The Voigt-Pipe: Abby can best be described as a revised Voigt-Pipe, named after Paul Voigt whom introduced the design, circa 1934. If we were to get a glance at Abby's internal construction it might look similar to this Voigt-Pipe design from Walton Audio webpages. As described in the Lowther - Voigt History, Paul Voigt and O.P. Lowther (employing the TQWT (Tappered Quarter Wave Tube) and Corner Horn) recognized almost 80-years ago the advantages in evacuating the rear wave of the driver to augment the overall sound. Given there were few high powered amplifiers back in 1930's these were designs born from necessity. Lowther has survived because they still produce some of the best sounding loudspeakers available. Its therefore a testament to Jason (and Terry Cain) Lowther America turned to Lovecraft Designs to manufacture their Alerion TQWT loudspeaker pictured below. 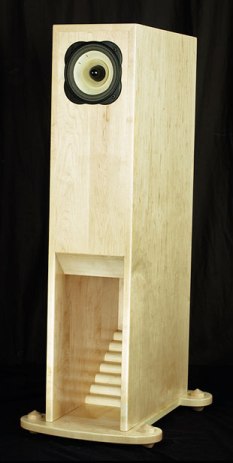 There are a plethora of TQWT, Voigt-Pipe and "folded horn designs" out there, the following Quarter Wave Length Loudspeaker Design Gallery indicates just how many DIY models are made in that search for quality music reproduction. From Mass market to High End to DIY there are literally thousands of loudspeakers available, but very few excel to satisfy the critical Audiophile. In the Abby, Cain & Cain and now Lovecraft have struck on just the right formula. At 70" x 9" x 9" (HxWxD) he Abby is symbiosis of several towering organ pipes to accommodate just the right Voigt-Pipe. The full-range driver is located midpoint up the enclosure, the dimensions of which are 1/4 of the driver's resonance frequency. The term "horn" rings true in this respect pertaining to the internal tuning of the driver's rear compression waves and size does matter. Our Abby's arrived in a single crate and were packed and shipped in a single crate, which almost weighed more then the speakers combined as seen below. 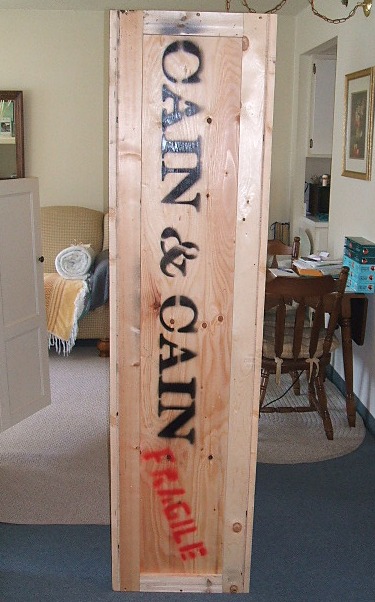 Stained in Merlot, Jason (following in the Cain & Cain Abby tradition) offers two types of drivers based on room size and listening habits. Specific drivers offered with the Abby are the Fostex FE166e (PDF) for larger rooms, or as in my case the Fostex FF165k (pdf) the near field driver, ideal for smaller spaces. Both are highly efficient and incorporated in their Alderwood skin will fill most rooms with realistic live-music sound levels while requiring just a few Watts. A 95dB rating at a relatively stable 8-Ohm make these drivers idyllic for OTL or Single Ended vacuum tube amplifiers. While the Fostex driver specifications are obviously efficient, the enclosure itself has just as much to do with this and the Abbys love to dance with vale amps and in particular Single Ended Pentode (SEP) or Single Ended Triode (SET) designs. Such amplifiers usually have a power rating down around 5W some as low as 3W, yet mated with a speaker such as the Abby you'll not be lacking for volume. In this venue $2,000 may seem outrageous, until that moment you step into a High End Audio listening room. if the Abby's are setup correctly and your a music lover your monetary perspective shall change with the first note. To quote Srajan Eban in his 6moons review:

"... Nobody in their right mind expects to buy a $1,500/pr speaker (at the time of writing) that does it all. What you get with the Abby... is a surprisingly warm-sounding speaker. At non-excessive listening levels, it's not zippy or tipped-up at all but rather, meaty and gutsy. Naturally, it's dynamic -- you expect that from a zero crossover design...The Abby tracks dynamic swings very well and scales instantly but doesn't exaggerate this aspect to seem unnatural. Going to the most challenging of materials --classical symphonic -- you'd be surprised by how well this single driver sorts through the thicket of massive complexity. You'd really appreciate dynamic responsiveness when the first crescendos carry the climaxes farther than expected..."

Such language will seem foreign to many, we just don't think of loudspeakers in this fashion. Until you begin active listening. My "first time," that is the first time I heard a truly High End system. I had what could ony be described as a protracted psychoacoustic hallucination. No I wasn't dropping LSD nor am I at this moment, it was a well recorded CD played on hardware which stimulated my auditory system on a deeper level, beyond cerebral evoking as music does emotion. I was drawn in, actively trying to see where the sound was originating from, because it certainly did not "seem" to be the loudspeakers. And this is what a well designed speaker is supposed to do when mated with the right components, diaphragms albeit cones, ribbons, panels etc. essentially vibrate rapidly in a controlled manner. The sound waves reaching our ears accurately reproduce the recorded event. If they do their job well, their physical presence should be as relevant as their color. With massive amounts of current driving them, employing multiple drivers, some High End, high cost behemoths are as complicated as the signal they reproduce. So how does Lovecraft designs Abby with its single driver mounted in pure Alderwood fair in the realism department?