In the ever raging sales battle among memory manufacturers, the Core i7 launch must have been the wind that shook the barley. While everyone was convinced i7 would be the real start of DDR3 technology, it also was a ´back to the drawing board´ call for most, having to come up with lower voltage memory parts - with decent performance - in a hurry. Four months into the launch now, we present you with a roundup of 8 mid-range kits from 8 different manufacturers. Begun, the new battle has.

It took a lot of sweat and hard work, and most of all… patience, but here we are : our biggest memory roundup published so far. I do not know if the so-called “crisis” has something to do with it, but the gathering of test samples has never taken so long. From the initial sample request in October, the first arrival around Christmas, up to the last test candidate only arriving in our lab last week, this has indeed been an exercise in patience. I’ll leave it up to you in the end if it was worth the wait, but I can tell you up front that we have been able to lure almost every manufacturer into our nets for this extensive Core i7, triple channel memory roundup.

There, now that I’ve got this off my chest, it’s time to talk about Core i7. Those reading this kind of review no doubt know everything there is to know about Intel’ s latest baby, so I won’t bother you with too much tech talk. Most important thing to know is that the memory controller is integrated now, so memory talks to the CPU directly resulting in far superior memory performance over Core 2. Second is the fact that i7 supports up to three channels of DDR3 memory, up from the 2 channels we’re used to. Later this year, the more mainstream core i5 will revert back to 2 channels, but today, we’re on three.

Last, and certainly not least, it’s important to remember that Intel limited the voltages the memory is allowed to function on. Although DDR3 has a JEDEC specification of 1.5Volts only, manufacturers and chip makers quickly exploited the oldest overclocking trick : more voltage means more performance. Hence, last year all the high performance DDR3 kits were rated around 1.9-2.0 Volts, and were offering speeds up to and beyond 2Ghz DDR because of this. 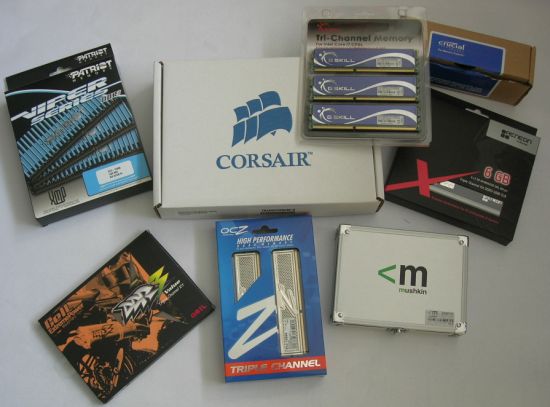 Shortly before the launch of i7, Intel spoiled the memory party : from now on, if you want to keep your cpu warranted by Intel, the maximum allowed voltage is 1.65 Volts. Basically, this was back to the drawing board for all but the most basic ram, and it took a while for higher speed grades to become available again. Today, most manufacturers are offering 1600Mhz DDR or better again, at the warranted voltages. Latencies generally are up a little (except for the very latest Elpida chips - but that is beyond the scope of this review), but we’ll soon see that all these higher latencies, and arguably even the higher speed grades, are not spoiling the party in any way…

Comment from Kougar @ 2009/04/10
Quote:
This has been observed with Corsair Dominator kits in other reviews. Link

I was just about to buy a kit of OCZ Platinum, nice to see the overclocking results here, thank you. Should probably mention the 6GB OCZ Platinum 1600MHz kit is available for $80 shipped AMIR, cheapest 1600MHz kit of all those tested.
Comment from blind_ripper @ 2009/04/10
80$

.
althoughe very nice work thorgal
Comment from thorgal @ 2009/04/10
Quote:
Yes, I read the xbit article, they come to about the same conclusion indeed.