People who regularly read this website will probably have noticed that the crew of Madshrimps basically consists of less normal reviewers; people who act a little off when around the newest released hardware, hence the name of this website. With permission of the manufacturers and hardware shops, we take hardware to the next level by overclocking on air. Well no, not really ... on liquid nitrogen that is. Using both dry ice and liquid nitrogen, subzero temperatures gives us the possibility to clock our hardware to frequencies unseen on regular air cooling and let us see the real power of the technology on our test bench. In some way, we see the future, as we can predict what will happen when technology is run at higher frequencies. Next to that, we provide manufacturers with information on what components should be improved and which are already decent. For instance, if a certain motherboard blows up in one of our tests, we let the manufacturer know that the power management system of the motherboard is not capable of running at elevated frequencies and the manufacturer can keep that in mind when refreshing the board and release a new revision.

Now, many of you probably think that manufacturers are not interested in hardware running at subzero temperatures, because, let's face it, no one is running their system 24/7 cooled by liquid nitrogen. However, by overclocking we don't instantly kill our components, no; we speed up the cycle of life to see what will eventually kill your system. It's like injecting steroids in a human being: the person will be able to perform much better, the chances of getting a fatal injury are elevated but when it eventually kills, scientists will know what is making the steroids so dangerous. Instead of waiting years and years to find out how long our motherboard lasts, we wait weeks, days or sometimes just hours.

Unlike how it may have come across in the previous paragraph, overclocking isn't that dangerous, because most motherboards are very well built. More and more people overclock extreme and less and less people actually break hardware. Well, that last sentence may not be entirely true ... people tend to not kiss and tell about their latest hardware deaths.

Anyway, after the overclocking part of story comes the benchmarking, or in short 'benching'. Which is in fact the most interesting part of overclocking as what we do is basically testing different technologies in different test environments. Certain applications can tell exactly how fast your computer is in comparison to other systems of other people around the globe. HWBot.org (developed by a Madshrimps reviewer and supported by our site actively) is at the moment the only website that gives these benchers the opportunity to really compete against each other in a global overclocking league for both individuals, teams and countries. A person needs to run a series of benchmarks, upload the scores and see how his (or her) results stack up against the other results in that category. If it's better than most results, it'll probably be awarded points, which are added to the personal total and to the team's total. Obviously, the more points, the higher you are ranked and the better you are overall. On a sidenote, Madshrimps was able to reach the 12th spot in the ranking of best overclocking teams in the world, not too shabby for a small Belgium OC team, eh! 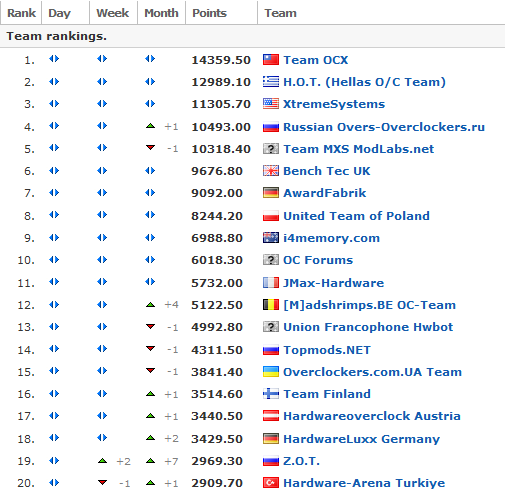 (competition is stiff though, we moved down a few place since this screenshot was taken^)

Now, the main problem of this extreme overclocking is the actual cooling part. We work with temperatures around -78°C (dry ice) and -196°C (liquid nitrogen) and we need to find a way to use these small pieces of ice and the fluid nitrogen to cool down the hardware. How? With containers or pots of course. Basically, you drill a hole in a piece of metal, attach that piece of metal to on your CPU or GPU and throw in the dry ice or liquid nitrogen. It's quite hard to explain using words only, but you'll understand it much better when I'm actually showing you the pictures of today's extreme cooling units.