Alphacool is known for their high quality and high performance water cooling systems. Today we take their best performing water block and mate it with CORA, their new passive radiator, aiming to build a fast, yet silent system.

Passive water cooling had long been regarded as a niche hobby for those Enthusiasts seeking the ultimate in silent computing. In their pursuit of silence, ergonomics often fell by the wayside as is evident in some homemade evaporative coolers. Unfortunately passive H20-systems offered little in the way of performance and as a result many turned to active H20-cooling for peace of mind and found little.

Ultimately H20-cooling similar to air-cooling is dependent upon the movement of air. OEM heatsink makers paid close attention and quickly realized 90mm and 120mm fans spec'd for H20-radiators moved more air with less revolutions and produced less noise. These fans quickly found their way onto the backs of copper air-coolers, which then sprouted heat-pipes and finally reincarnated the "Orb" shape.

As in any evolving industry even cutting edge designs reach the point of diminishing returns as basic thermodynamics dictates it all comes down to surface area. Towards that end passive H20-cooling makes sense and Alphacool has introduced a line of Passive Watercooling Sets. (EDIT 7/19/06 The 662 has been discontinued the following link is to the 642 which is somewhat similair.) Today we test their flagship Cape CORA. Based on their best water block the NexXxos XP this system takes the passive out of passive/aggressive world of H20-coolers. 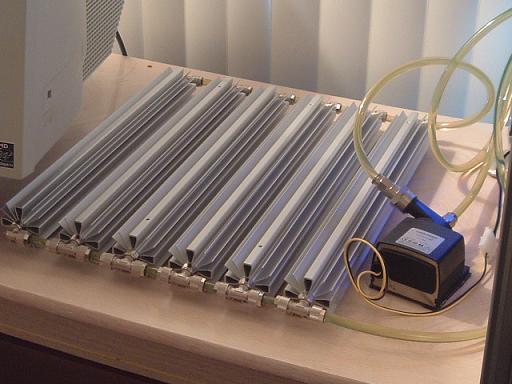 Alphacool's Cape CORA 662 XP passive cooling system is built upon six individual 40cm length radial finned aluminum radiators. Each passive radiator is constructed around an 8mm (internal) core through which liquid coolant of choice flows. Heat is then dissipated through the aluminum by virtue of its radial fin design, with each section featuring a total of 12-fins protruding from the center, or flow section. The fins run the full length of each unit, eight of which are "straight edged" measuring 2.54cm (depth) 40cm in length. Among the "straight-edged" fins at intervals of four there are folded fins which fold back onto the section core. The picture below represents a "cross section" although we're looking at the end of the aluminum section where the T-section screws into the radiator 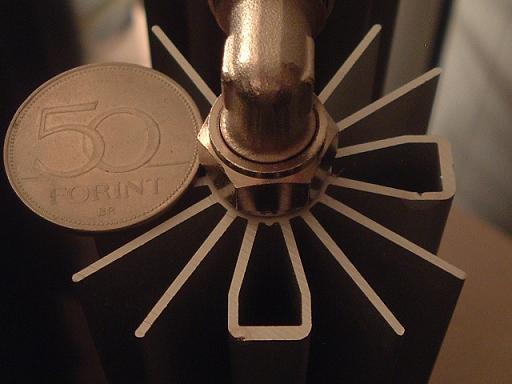 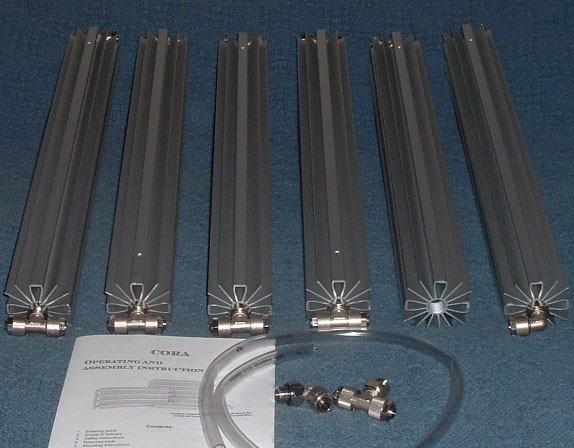 As the beating heart of the system Alphacool AP910 Centrifugal pump with a delivery height of 2.8m and a max 900 l/h (made specifically by OASE). 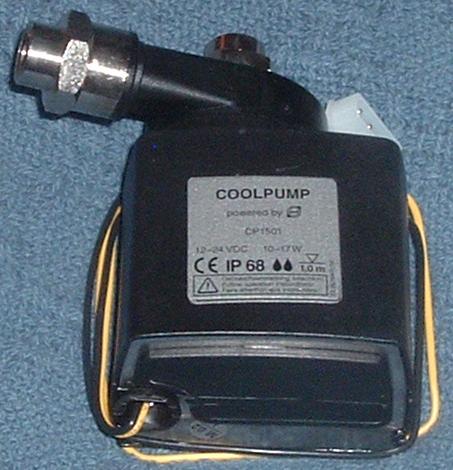 Also included in the kit, Alphacool's Cape Coolplex 10 Compensating Reservoir (seen below mounted horizontally, the clamps allow vertical mounting just about anywhere on or in your case). 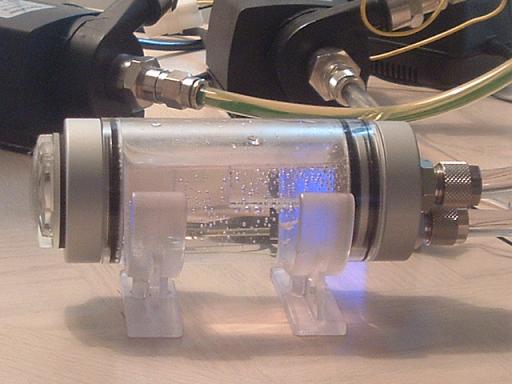 Cora 662 radiator can be easily mounted to the side of any aluminum or steel case provided one has a drill. I opted for the Lucite stands which Alphacool labels their Installation face Plate for External Cape Cora. Regardless of the name these stands allow the radiator sections to stand freely thereby dictating where you want to place the radiator. It's also quite ergonomic and this also allows you space the sections further apart freeing a significant amount of surface area compared to the clips which hold the radiators firmly together. 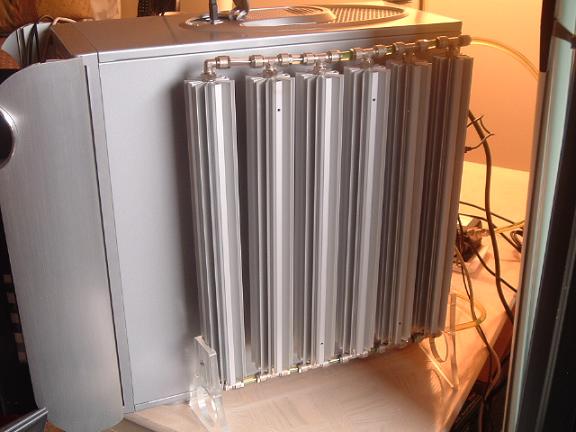 NexXxos XP Design Specifications
Alphacool has made some changes to the NexXxos XP since its release. A quote from Alphacool's site on the improved NexXxos XP; "A new kind of copper cooler with parallel canals in PCF(c) construction type. Additionally, canals were repeatedly drilled in 90 degree angles - thus the surface for the heat transfer is drastically increased. The copper surface is glass-beaded in order to increase the cooling surface further more. The cooler has a patent-applied nozzle unit with return canals for the quicker transport of warm water. The flow resistance has been reduced by 30%, which provides very good condition for systems with G1/4" connections and 10mm hoses, as the cooler considers hoses with 8mm inner diameter." 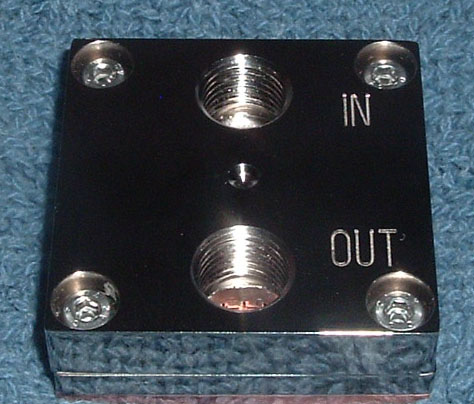 Alphacool water block sport some of the very best finishing in the industry. 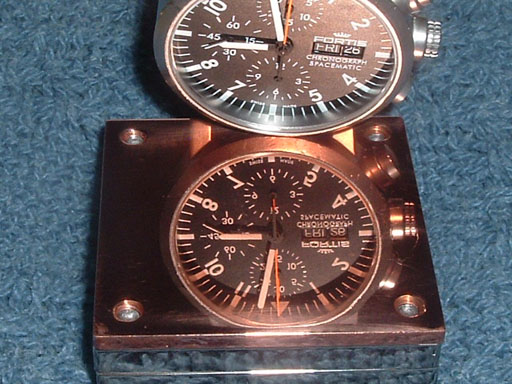 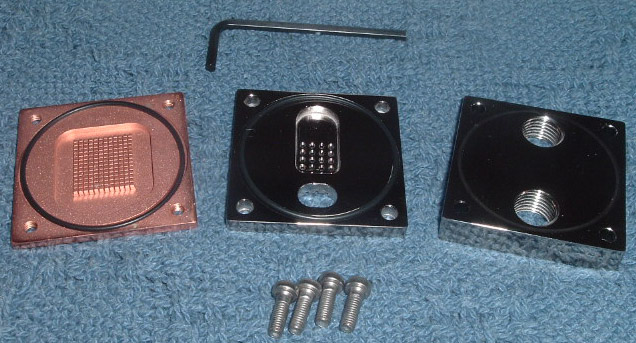 Clicking on the thumbnails below gives a close-up of each section in their respective order seen above. The first close-up reveals the copper base impingement zone.