Lord of the RAM, Return of the MushkinG

Mushkin has been a supplier of quality PC and Server based memory since the days of SDRAM. Today [M] has been invited along on Mushkin?s latest excursion as they once again prove themselves worthy as the DDR Ring Bearer, and the Lord of the RAM.

Lord of The Ram

We cite a Lord of the Ring analogy as we embark on a long and enigmatic journey across the DDR landscape. Mushkin made their home in Denver, Colorado located at the base of the Rocky Mountains. This is known as the gateway to the Pacific, where the Great Plains end and the Continental Divide stands with it's 13,000 foot parapets. Perhaps there's no more fitting a start for such an epic journey and as with any epic, there are peaks to traverse and a diverse cast of characters to overcome the odds. While Mushkin has certainly proved itself worthy as the DDR "ring-bearer" conquering JEDEC PC3200 peaks with their Level II Black, the company still felt entrenched in the foothills of the Rockies.

For our analogy we look to the ubiquitous landscape of the semi-conductor industry where most products are designed either for Middle Earth or the Shire, let’s face it no one really cares about Mordor. It would be most difficult for a company to design and market memory exclusively for the Aragorn’s or Elrond’s of the overclocking kingdom. Middle Earth is how manufacturers survive and prosper. They design for the people of Rohan, the people of Gondor, the Dwarfs, Elf's and Hobbits, all analogous to the OEM, Server, Business and Desktop Markets. Mushkin has steadfastly maintained their integrity in the tumultuous semi-conductor landscape among larger memory suppliers (Sauron among them). While past Mushkin ring-bearers have made the trek traversing the Overclocking peaks with their Black (PCB) line, they are no longer content to remain supplanted in the shadows of the mountains before them. Mushkin has felt the magical powers as the recent "Ring" bearer where DDR performance is concerned, and they now seek to deliver the competition into the fires of Mt. Doom. Today we bear witness to that circle of characters Mushkin has gathered from all their kingdoms to once again clay claim to the title; Lord of the RAM return of the MushKinG. 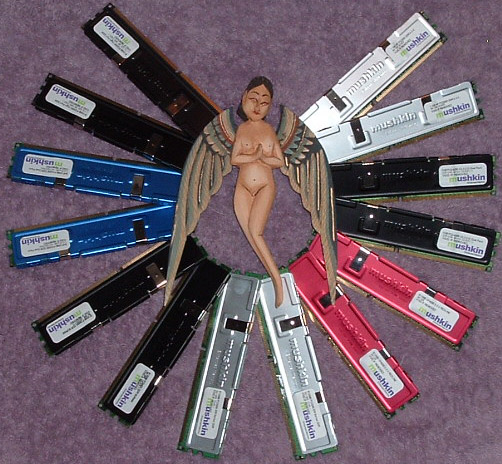 For the DDR portion, which is the bulk of this review, I've chosen to eschew testing on Intel's 875/865 chipsets which are now ebbing in performance since their release almost two years ago. Both Canterwood/Springdale (875/865 respectively) house the Memory Controller Hub (MCH) within the North Bridge (NB) and in the absence of any innovations such as nVidia offered in their original nForce chipset with it's DASP technology no substantial revisions have occurred since their release back in early 2003. Even the nForce DASP technology which functions as pseudo-cache theoretically reducing latency performing as a pre-fetch, may have been fully exploited. Hopefully for Intel the C19 which features DASP 3.0 should breathe some needed life into DDR2 performance, nonetheless that still leaves Intel devotees, most of whom still own Socket-478 platforms, in a precarious position.

Over the years DDR performance on the aforementioned has been reviewed to death and as a cutting edge platform Canterwood/Springdale's time has come and gone. Were it nor for a desire to keep the Dothan brain alive it's doubtful motherboard makers would be thinking up any new silicon to build around Canterwood/Springdale chipsets. For the reasons stated we'll focus primarily on DDR performance our catalyst being the AMD A64 on-die MCH. Socket 939 blessed us with Dual Channel performance and today we mate our 90nm core 3500+ with what must be the most adroit yet capricious S939 motherboard ever intended for the Enthusiast market: DFI's nF4 LANPARTY UT. This board has more memory settings then solder-droppings in a Kobe PCB plant, and a few even the engineers probably had to research themselves. For example it took two photos’ to capture all the memory settings, as seen in the thumbnails below;

Since we will be testing just one kit of DDR-2 I've chosen the Asus P5AD2-E Premium which was until just recently had been the board of choice for extracting full performance from DDR2 based systems. Onto our test environment.

All pairs, or single modules doubled were tested in Dual Channel mode while installed into DIMMs 3,4 and run under DFI BIOS version 125. Mushkin has divided their memory into three specific categories designed for (but not limited to) Desktop users. Throughout the upper echelons you'll find their new Redline series. More on its place across these product lines later.
Mushkin DDR Ring Bearer's:
Extreme Performance
High Performance
Enhanced Performance

For each specific test I've chosen to run the sample at manufacturer specifications and then push the modules to their performance ceiling in DC (Dual Channel) mode. I employed a multifarious approach including memory voltage adjustment (increase), BIOS tweaking etc. Prior to each set of benchmarks I've provided screenshots from CPUZ v.1.28 (Memory and SPD views) along with H Oda's WCPUID (WCPUCLK) indicating real-time CPU-clock speed. Prior to each test thumbnails are included to verify CPU/Memory speeds and latencies, including SPD (Serial Presence Detect) info.

The DFI LANPARTY nF4 UT motherboard features a useful memory voltage jumper which provides up to 4.0V of VDIMM above the board's already high 3.20V. Using the jumper required additional cooling to the memory I installed a 120mm fan to aid in cooling the memory and pertinent circuitry when the jumper was employed. The photo below shows our "Mad laboratory" test set-up (lying at the foot (rear) of the case is Danger Den's NV68 6800 memory/GPU water cooler, soon to be installed for it's upcoming review). 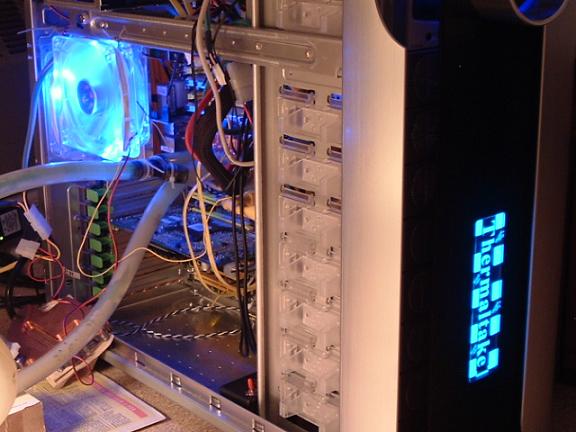